Why the Centre needs to review Kashmir beyond the rosy picture

Beyond the festivities linked to the abrogation of the special status, there lies an evolving story in J&K that raises concerns on national security and public alienation.

One of the boldest decisions on one of the most complex issues — the abrogation of the special status of Jammu and Kashmir — proved a cakewalk for the Modi government. And it is Prime Minister Narendra Modi and Union Home Minister Amit Shah who jointly managed the historic abrogation with all perfection, thereby proving decades of cynicism on the issue wrong. No human lives lost. And no protests against the decision that was otherwise believed to put “Kashmir on fire”. The unexpected calm in Kashmir somehow lived up to the government’s proverbial image — Modi Hai To Mumkin Hai. And then, from holding incident-free District Development Council elections to numerous cultural and sporting events, the J&K government has been celebrating since.

However, it seems that the unending festivities have overshadowed the growing concerns on national security and public alienation in the fragile region. While militancy-related cases are largely being downplayed as “isolated incidents”, the armed insurgency has actually grown bolder even in Jammu, than to talk of Kashmir alone. The arrest of numerous militants and their associates from Jammu city suggests that sleeper cells are being activated there. The spike in deadly attacks in Kashmir is even more alarming.

On February 17, when the member states of the European Union (EU) and the Organisation of Islamic Cooperation (OIC) visited Kashmir, militants shot and wounded the son of the owner of a popular eatery — Krishna Dhaba — in the high-security Durganag locality of Srinagar, barely a mile away from where the diplomats were staying. The attack conveyed a message that militants managed to choose their prey, spot and timing for the attack, taking the multi-tier security grid by surprise. This was the second attack on a non-Kashmiri businessman in the last two months. Earlier, on January 1, a Punjabi jeweller was shot dead in the heart of the summer capital.

A day after the foreign envoys concluded their visit, two cops were shot dead on the high-security Airport Road, outside Police Station Sadder on February 19. If policemen are not secure outside their own police stations, the security of common people can only be imagined. 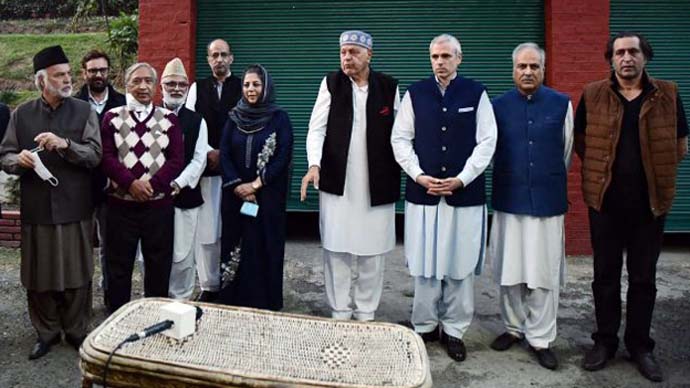 Jammu, on the other hand, has become even more sensitive. Indian Army tells that story.

In the recent presentation to the 24 visiting diplomats, the Indian Army officials said that the heightened vigil along the Line of Control in Kashmir has pushed terror groups and Pakistani establishments to send terrorists into India, using tunnels dug under seasonal river beds along the International Border in the Jammu region. Last year, security forces discovered six such tunnels in Jammu. And then, there are drone issues. “In order to reduce the loss of life, the Pakistani establishment is airdropping weapons from across the border using drones. These drones can carry payloads of around 12 kilograms,” the army officials told the foreign delegation.

So, the logical concern is: How much infiltration may have taken place through tunnels and drones?

The winter capital of Jammu is already showing symptoms of possible infiltration. In February 2021 alone, security forces claimed to have nabbed at least three militants from the city of temples in less than a fortnight. As per police, on February 14, Suhail Bashir Shah, a resident of Newa village in Kashmir was caught with seven kilograms of explosives on the outskirts of Jammu city. Days before that, on February 6, Lashkar-e-Mustafa chief Hidyatullah Malik was caught by police. In another recent incident, on February 17, a person from Poonch accused of terror links was caught from Jammu airport soon after he arrived from Mumbai.

The cross-border funding channels have also shown new variants. On June 11, 2020, the Jammu and Kashmir Police claimed to have busted a huge narcotics-terror module. Apart from the arrest of three persons, the police had recovered 21 kg heroin and Rs 1.34 crore Indian currency, a total worth over Rs 200 crore from the operatives. There is also a sudden spurt in the construction of multi-storeyed buildings and many of them are allegedly illegal constructions cropping up in Kashmir in general, and Srinagar in particular. During a global financial slowdown due to Covid lockdown, money laundering through real estate investments cannot be ruled out.

Amid all this, the government is trying to keep the youth busy with sports and cultural events. Not much is being done for their employment.  Well, isn’t entertainment subject to livelihood? And then, the public alienation towards the Union government led by BJP has only furthered, even in the Jammu region, from where BJP had won both the Parliament seats in 2019.

The People’s Alliance for Gupkar Declaration swept the first-ever District Development Council polls held after the state lost its special status to abrogation of Article 370. Farooq Abdullah-led coalition won 110 seats out of a total of 278. The BJP couldn’t sweep even Jammu and bagged a mere 75 seats out of the 140 in the province.

The bureaucracy is often accused of ruthless corruption, which is presumably responsible for growing public alienation. At press conferences, mediapersons often appreciate Lieutenant Governor Manoj Sinha for his honesty, integrity and dynamism, only to raise their brow at bureaucrats who run the system.

Looking at the developments since the abrogation of the special status, it appears that the Centre, led by Modi and Shah, had a perfect masterplan to execute the bold move. But then, a similar immaculate plan for the road ahead seems missing.

Apart from revamping on other fronts, Jammu and Kashmir needs smart policing. And here, for a place as complex as Kashmir, smart policing cannot come through inexperienced hands, simply because the Modi-Shah image on Kashmir shouldn’t be put to hit and trial. Here, experienced hands with a proven track record can deliver more. National Security Advisor Ajit Doval should equally review the J&K policy framework.

The review beyond a rosy picture has become inevitable. This is mainly because beyond the festivities linked to the abrogation of the special status lies an evolving story that raises concerns on national security and public alienation alike.

Also Read | Rest in Pieces: Why I mourn the death of Jammu & Kashmir’s Article 370 special status