Article 370 is just the start: Is One Nation One Poll likely next step under India's two supreme leaders?

Let’s not pretend: people in Kashmir have been shut down, rendered voiceless only because they are Muslims and unlikely to ever be voters of the BJP. But what is next on the cards?

A state has been erased from existence, its people cut off from communication, its democratic leaders jailed.

To my mind, there is nothing democratic about the manner in which Article 370 has been scrapped.

And for the first time in India’s history, a state, once a showpiece of India’s secularism, has been downgraded to the status of Union Territory.

This act marks the end of even symbolic secularism in India — a value that was already gone in spirit and remained only in the letter of the law.

But no matter — many in India are celebrating while others don’t know or don’t care. The scrapping of Article 370 and the diminishing of J&K is apparently another electorally smart move for the BJP, now possibly run by two supreme leaders (or is that an oxymoron?) who know how to appeal to the lowest common denominator and game the first-past-the-post system.

Because the Supreme Leaders have decided what they want? (Photo: Reuters)

But there are some people, now electorally irrelevant, whose hearts do break and blood does run through their veins, though they happen to be Muslims.

The younger generation may not know the symbolic history of Kashmir, so let me digress. I grew up in a home where arguments were always made that it is important to reconcile the Valley with India and anything short would challenge Indian secularism. That was when Indian Muslims believed secularism was working and they would point to the linguistic and ethnic battles in Pakistan to say the ‘two nation theory’ was a disaster from the very beginning.

Now the Indian state has stopped the pretence of even engaging with the majority population in the Valley that happens to be part of the largest minority population of India.

Let’s not pretend: they have been shut down, rendered voiceless only because they are Muslims and unlikely to ever be voters of the BJP.

When some fine citizens of India cannot stand food delivery from a Muslim, how can the nation of their dreams tolerate a people who constantly challenge the Indian state? So now the Valley can just shut up or reconcile to a life of daily humiliating police and army checks. A life of intermittent communications black-out; a life when children must be kept indoors and taught to not go near the soldiers and check-points. It’s not unfamiliar to them — the misery has just been upgraded. One-way bridge? Kashmir's misery has only been upgraded with the end of Article 370. (Photo: Reuters)

And Indians can buy land in the Valley — though they still can’t in Uttarakhand and Himachal Pradesh unless they are original residents of the state.

But then, as we saw in the Triple Talaq matter, we have special laws for Muslims or areas where they live.

Even as Kashmir ceases to be a state at the head of India, on the East flank, the National Register of Citizens (NRC) wreaks havoc with lives.

The NRC in Assam still has many Bengali Hindus in its dragnet, but the ruling party of India that is changing all the rules promises a law that will correct that (for Hindus only, Muslims be damned). And yes, at any given time, on any political calculation, the NRC can be extended to any part of India. The honourable Home Minister, Amit Shah, passed an order that decreed so, three days in office. I’m sure poor Hindus will not be asked to prove citizenship but poor Muslims will — should the need arise in any locality, region, state.

So let’s forget about secularism altogether.

The even greater danger is to federalism.

Imagine tomorrow that it makes electoral sense for the BJP to bifurcate north Bengal from West Bengal.

The BJP can do it if they set their mind to it, given that opposition forces have shown no backbone. Suppose in the future, the region of Vidarbha holds the key to an Opposition revival in Maharashtra — it can always be made into a separate state.

We have in fact reached a point where legislators and people’s representatives are so purchasable that they have put themselves up for sale (discount offers) because the parties they belong to have been collapsing. Shame on the Congress too for persisting with its dynasty problems and failing to have internal elections as the India we know unravels.

It is only some of the Tamil Nadu parties, such the Dravida Munnetra Kazhagam (DMK) and Marumalarchi Dravida Munnetra Kazhagam (MDMK), whose leader Vaiko gave one of the strongest speeches during the Article 370 debate in the Rajya Sabha, that appear to have recognised the danger of what can come in the future. This is due to the state’s own unique political movements and history.

But opposition parties, including the Congress, have been divided and railroaded quite easily. Therefore, what lies in the way of One Nation One Poll? 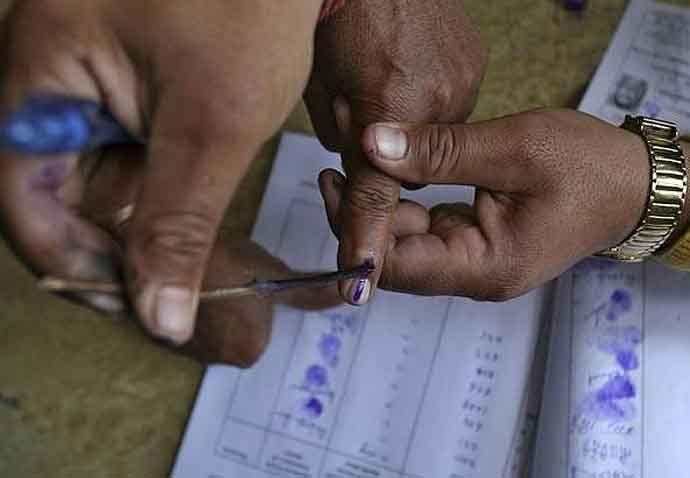 Just one stroke? Will the govt now push through One Nation One Poll? (Photo: Reuters)

The most grotesque joke has been the Aam Aadmi Party (AAP) and Bahujan Samaj Party (BSP) — two forces that claim to speak for subaltern power, going along with a move that disempowers the people of the Kashmir Valley.

After the ease with which the government managed to change this Constitutional provision, preparations must have begun to roll out PM Narendra Modi’s pet project of simultaneous state and central elections. It’s just a matter of getting some Assemblies to agree to dissolve before their term is over. Since politicians are migrating to the BJP, or being persuaded to do their bidding while in other parties, the One Poll goal seems doable to me.

We are just in the third month of a five-year term.