What Kashmir? For some Indians, Kashmir is paradise, for others, it's burning hell. For some others, it means nothing

Article 370 scrapped and its repercussions in Kashmir, as well as tensions with Pakistan, are like a fairy tale to many marginal sections of society. It means nothing in their everyday lives.

Kashmir has different connotations for various social communities in India.

For tourists, it is a beautiful place to explore while in the nationalist psyche, it’s a zone that needs to be fully integrated in the Indian state without any special privilege.

But there are also many Indians who are complete strangers to the enigma that is Kashmir.

Such as the inhabitants of a basti (hamlet) of saperas (snake charmers) in the Shankargarh block near Prayagraj, Uttar Pradesh —  who, despite all the noise about it, are utterly oblivious about Article 370 and the nation-wide debate it has caused.

Some of them know of Kashmir but the majority does not. Even though most of them have heard about Pakistan, in the context of “Pakistan se Bharat ki ladayi hoti hai” (India often goes to war against Pakistan), the nature of the war over Kashmir eludes them. 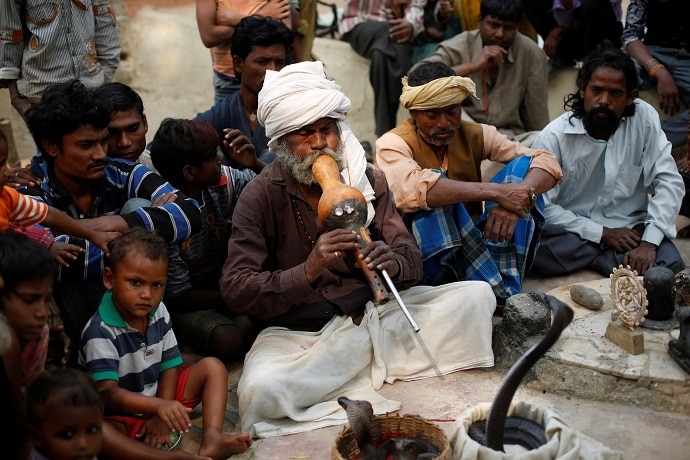 Their own tune: Ignorance is bliss for inhabitants of the bastis in Prayagraj. (Photo: Reuters)

Ignorance is also bliss in the basti of the sarwan (broom makers) in Bara Tehsil area. This community earns their livelihood by making and selling brooms as well as relying on their knowledge of the traditional way of cleaning ears.

No one in this basti knows anything about Article 370, leave alone its significance for Kashmir.

Only two people out of 60 in the basti had a slight idea of the recent development — courtesy conversations at their local teashop.

Meanwhile, in the Kol basti, inhabited mostly by underprivileged tribals, the news seems to have travelled fast. Even though a higher number of people knew about the Kashmir issue, the details were sparse. 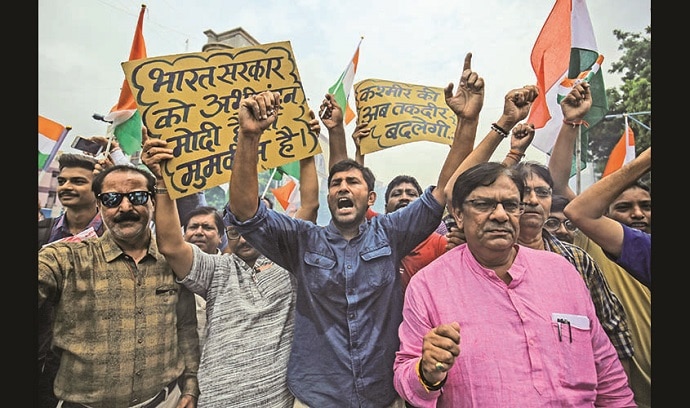 A middle-class thing? The jubilation over the scrapping of Article 370 seems limited to the well-off. (Photo: Reuters)

The issues of Kashmir and Article 370, which are very popular among the middle class and elites, do not hold much worth for the subaltern population.

On the issue of Article 370, most of the middle class, the youth of upper caste groups, a few OBC castes and developed Dalit castes expressed their happiness recently. At many places, a section of the public distributed sweets, burst firecrackers and celebrated the scrapping of Article 370. Ironically, the bastis, just a few kilometres away, are not even aware of the issue and the narratives.

So, even though it is true that Bhartiya Janata Party (BJP) and Rashtriya Swayamsevak Sangh (RSS), by their organisational efforts, try to disseminate certain influential issues across the country to evolve a master narrative based on their political discourses, this particular move has seemed to influence only the upper class and middle-class minds as of now.

The subaltern consciousness remains untouched by any of the storms on Kashmir.

Also read: Midnight's Most Confused Child: What Salman Rushdie's tweet on Kashmir tells us about him

Post your comment
#Narendra modi and amit shah, #Amit shah section 370, #Article 370 removal, #Article 370 jammu and kashmir
The views and opinions expressed in this article are those of the authors and do not necessarily reflect the official policy or position of DailyO.in or the India Today Group. The writers are solely responsible for any claims arising out of the contents of this article.