Goodbye, Article 370: Twitter is flooded with reactions on this historic move

From thanking PM Modi to calling the move illegal, Twitterati's diverse opinions are setting social media on fire over Article 370.

In a historic move, the government has revoked Article 370 of the Constitution that granted special status to the state of Jammu and Kashmir. 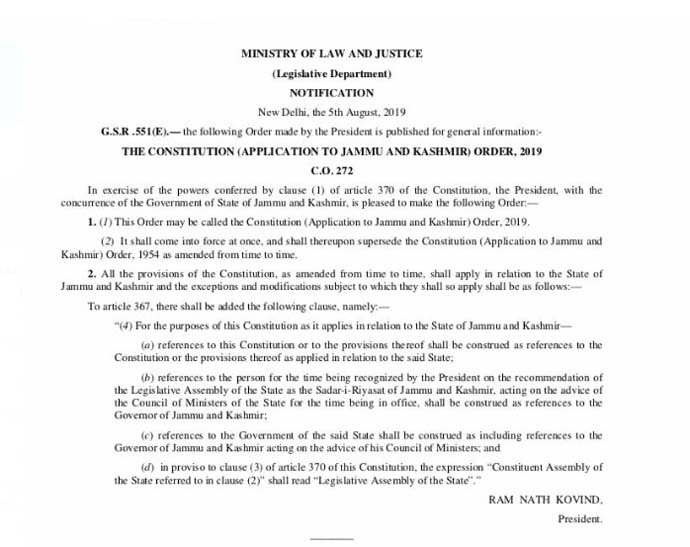 Notification on Article 370 signed by the President of India. (Photo: Ministry of Law and Justice)

Even as the live updates from Parliament were coming in, social media is already ablaze with reactions to the revocation of Article 370.

From hailing the Prime Minister and Home Minister and thanking them for this historic moment, to calling the move to revoke Article 370 outright illegal and unconstitutional, and accusing the government of making a move to oppress Kashmiris, Twitterati, from journalists to netas, and activists to authors, had much to say on the subject.

Here are a few diverse opinions:

The @AmitShah announcement revoking #Article370 says it has the consent of the Jammu and Kashmir government. But there is no elected government or assembly in place. So consent is that of the Governor. What happens when a new assembly is elected? All sorts of questions persist

What a glorious day. Finally d martyrdom of thousands starting with Dr Shyam Prasad Mukharjee for compete integration of J&K into Indian Union is being honoured and d seven decade old demand of d entire nation being realised in front of our eyes; in our life time.Ever imagined?🙏

We will challenge the order passed today in the Supreme Court. The move to replace "Government" by "Governor" and Constituent Assembly by "Legislative Assembly" is a fraud upon the Constitution. Appeal to progressive forces for solidarity. Protests today in Delhi and Bangalore.

Presidential Order on J&K is Modi Govt coup against Constitution. Demonetisation was no solution to black money - this coup is no solution for Kashmir. Emergency's midnight knock has reached Kashmir - will soon reach the whole of India. Joint protest at 3 pm, Jantar Mantar today

PDP's RS MPs Nazir Ahmad Laway&MM Fayaz protest in Parliament premises after resolution revoking Article 370 from J&K moved by HM in Rajya Sabha; The 2 PDP MPs were asked to go out of the House after they attempted to tear the constitution. MM Fayaz also tore his kurta in protest pic.twitter.com/BtalUZMNCo

Statement of Omar Abdullah, Vice-President of National Conference and former Chief Minister of Jammu & Kashmir, on revoking of Article 370 and other decisions announced by Government of India. pic.twitter.com/L9RXggb10k

We support the govt on its decisions on J & K. We hope this will bring peace and development in the state.

So J&K doesn’t exist as a state now- Jammu and Kashmir to be a union territory- Ladakh a second union territory- But the big question- Is all of this legal?- What is the role of J&K assembly which is supposed to ratify parliament orders for J&K or it is not needed at all-

So I am proved right. To abolish Art 370 we do not need a Constitutional Amendment. Amit Shah has however informed Parliament by way of a Resolution what President today has already notified. Art 370 died today. Collaterally so Art 35 A

GOIs intention is clear & sinister. They want to change demography of the only muslim majority state in India , disempower Muslims to the extent where they become second class citizens in their own state.

It will have catastrophic consequences for the subcontinent. GOIs intentions are clear. They want the territory of J&K by terrorising it’s people. India has failed Kashmir in keeping its promises.

Parliament is being INFORMED!!! It is not being asked to vote. It doesn’t need a vote AFAIC #Article370 pic.twitter.com/pPTXGsKosz

Also read: Ladakh: The third, and most overlooked, part of J&K