Lynching of Nilotpal Das and Abhijeet Nath: Why the Assamese is ready to kill his own

The deepening fault lines within the community are exposed again.

The young Assamese is angry — very angry, waging a perennial battle against the threat to his culture, language and identity.

While this anger is mostly against a common enemy — the "Miyas" from Bangladesh who have apparently taken over all our land — there are a host of enemies. Sometimes, it's the Bihari migrant ("kill them, they are taking our jobs"), sometimes the Bengalis (and their increasing social dominance) and when there is no one else left, the angry Assamese starts looking for the enemy within. It is then that the culture war transforms into a tribal versus non-tribal conflict, hills versus plains, caste-Assamese versus the rest. Even if you manage to rein in all these "natural" enemies and defeat them in your mind and social media timelines, the list just keeps growing. It seems like the entire universe, including supernatural forces, are conspiring against the Assamese. We have been fighting the 'witches' too, and valiantly beheaded so many of them, but then, they too are like the White Walkers — you can't kill them dead.

But it's "true" that we are a peace-loving people and the "outsiders" too swear by it — our hospitability, the warm welcome that we extend every time they visit our "prized" land as tourists. Who can complain that we don't treat them well, don't feed them enough, don't share enough of our culture (Bihu dance), don't offer enough respect greeting them with those meticulously woven silk gamusas?

Yet, the lynching of two young men from Guwahati — Abhijeet Nath and Nilotpal Das — in Dokmoka in West Karbi Anglong district of Assam has only exposed the Assamese more. While a ruthless blood-thirsty mob killed the two young men, "mistaking" them to be "Bihari" child-lifters, those seeking justice for Abhijeet and Nilotpal have found an excuse to channelise their suppressed anger, threatening to kill all Karbis — to burn down Karbi Anglong.

In those fierce cries — we want justice, justice, justice; Ulai Aah, Aaah oi Aah (come one and all, come out of your homes) —  lies the open threat to turn into the same murderous mob. The one that killed the two men. Suddenly, the Karbi is no longer the fellow Assamese who joins you on the streets in protests against the Bangladeshis, or joins you in abusing the Bihari labourer for apparently how dark and smelly he is, or in making fun of the chicken-hearted "Bongali". The Karbis have now become an enemy tribe. On the other side, at the centre of the Karbi angst is the Assamese "outsider" who has always tried to play the big brother and "subjugate" them.

Protests against the killers across towns in Assam, including the capital city of Guwahati, have clearly exposed the fault lines once again. The angry young Assamese is out there to finish everyone.

Yesterday, it was the Bodo. Today, it's the Karbi. Tomorrow, it will be the Mishing and all those tribes and sub-tribes who collectively take pride in calling themselves Assamese.

So, if everybody is Assamese, why have they turned against each other? Well, for the same reason the rest of India finds an enemy within to fight against — the Hindu versus the Muslim, the Brahmin versus the Dalit, the Shia versus the Sunni, the Kannadiga versus the Tamil, the "Bangal" versus "Ghoti", etc., etc. 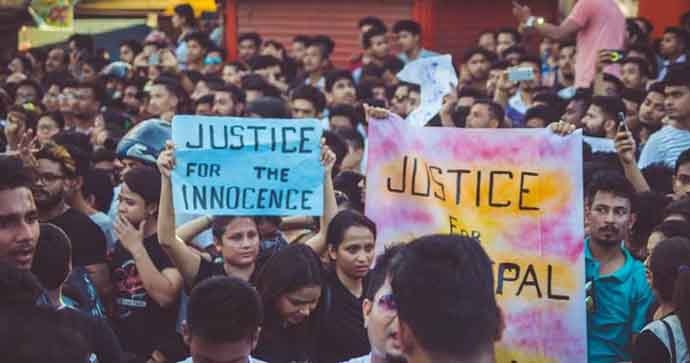 Why does the Assamese find himself in the middle of such identity wars, amid his own people?

It cannot get more bewildering — Indians who keep preaching to the entire world about the unity in diversity of this great motherland can't stop fighting among themselves.

The Assamese, like most Indians, is finding it hard to conceal his belligerence beneath that soft-spoken, hospitable, accommodating veneer. His disdain towards the outsider. In fact, the entire Northeast is replete with such episodes of contempt towards the 'outsiders' living there. The racism and stepbrotherly treatment that the Northeast keeps accusing "mainland" India of is being returned to the "outsiders" in equal, if not more measure.

The irony behind this is also out in the open for everyone to see. For instance, most states in the Northeast either have (Arunachal Pradesh, Nagaland, Mizoram) or are demanding (Meghalaya, Assam and Manipur) the introduction of inner line permit (ILP) to regulate the entry of "outsiders" (including fellow Indians from other states) into the state/s in the name of preserving ecology and tribal identities. But we wouldn't want similar restrictions imposed on us before entering any other part of the country, notwithstanding eco-sensitivity and tribal sensibilities. Interestingly, in Manipur, communities (Meiteis and Kukis) are fighting among themselves for and against ILP implementation.

Similarly, tribal and non-tribal identities disappear in Assam when it comes to protecting the land against the Bangladeshis. The contentious Citizenship Amendment Bill, for instance, is being opposed on the grounds that this would pose a threat to the identity of the Assamese people and harm the interests of the indigenous people. Of course, the Bill is also opposed, and rightly so, on secular grounds since it seeks to create divisions on  the basis of religion. But the Assamese people have time and again shown how protective they are of their own identity.

Then why does the Assamese today finds himself in the middle of such identity wars amid 'his own' people?

The brutal attack on the two young men is even more frightening, because the victims, according to the video clips that went viral on social media earlier, were heard pleading with the crowd to spare them, saying that they were Assamese.

One of the victims, Das, is heard pleading: “Do not kill me… please do not beat me. I am an Assamese. Believe me, I am speaking the truth. My father’s name is Gopal Chandra Das and mother’s name is Radhika Das… please let me go.”

While the Assamese is hugely responsible for the misfortune that has befallen him today, the solutions thrown at him by the Centre too has played a role. Because every time the region has seen subnationalist challenges from groups within the multi-ethnic state, demanding exclusive rights to resources and land, the response and 'solution' has been dividing the state into more halves. Every time there is a crisis in Assam — from insurgency, secessionism, ethnic conflict, linguistic turmoil — the response has been to ignore the real problem (availability and equal distribution of land, resources, employment), instead carving out a separate state out of the bigger state to satisfy individual groups.

However, such piecemeal solutions eventually fail to placate all sides, because everybody wants power for themselves and nobody wants to share it. This response to tackle the problems in the Northeast has actually given rise to more demands for separatist movements in the multi-ethnic region. The real problem is, no matter how many divisions are created, there will always be one group dominating the sub-group. The need is to rein in such inequality (of political power and social status).

But perhaps not all is lost. The young Assamese can still hope to salvage their pride and identity without nursing grudges against each other. What better example than Radhika and Gopal Chandra Das, the parents of Nilotpal Das. Even as protests continued to rage across the state, the parents have urged people to refrain from participating in the “politics of hate”.

In an immensely magnanimous gesture, they have issued a public appeal in a local Assamese daily, asking people of the state to exercise restraint and not to fall prey to fake news. “A group of miscreants are responsible for the incidents and we hope that they are punished. At the same time, we hope that no innocents are harassed for it.”

#Assamese nationalism, #Abhijeet nath and nilotpal das, #Karbi anglong, #Assam lynching
The views and opinions expressed in this article are those of the authors and do not necessarily reflect the official policy or position of DailyO.in or the India Today Group. The writers are solely responsible for any claims arising out of the contents of this article.