Assembly election results: 12 parties that have quit the BJP-led NDA since 2014

The election results from five states shows that 2019 is not going to be a clean sweep for the BJP. In case of a fractured mandate, the party would need allies. But will it find any?

Just about four and a half years back when the BJP stormed to power after the national election in 2014 with 282 seats in the 545-member Lok Sabha, the party looked invincible. Many experts had then said this is a mandate for a 10-year BJP rule in the country. The BJP is in a desperate need to woo more parties join the NDA if it wants to return to power in 2019. (Source: India Today)

However, with general elections just a few months away, it appears that the BJP can rely only on its own strength to make a comeback. It will need allies to enter the 2019 election fray.

But with 12 parties having quit the NDA ever since 2014, it looks like the BJP has taken coalition politics too lightly.

Here are the 12 parties that walked out of the NDA in the past four years:

Prime Minister Narendra Modi's Bihar ally Upendra Kushwaha quit the government and exited the NDA on Monday, December 10, in a move anticipated for months. Kushwaha’s resignation reportedly follows growing resentment with the ruling party and its seat-share deal with another ally, Nitish Kumar, for the 2019 national polls. Upendra Kushwaha-led RLSP has been the latest ally that the BJP has lost. (Source: India Today)

Vaiko party's Marumalarchi Dravida Munnetra Kazhagam (MDMK) was the first to quit the Narendra Modi-led NDA just after the Lok Sabha elections in 2014. MDMK parted ways with the BJP in December 2014, blaming the Centre of “being insensitive” and “betraying the interests” of the people of Tamil Nadu and of the Sri Lankan Tamils. The Maharashtra-based party had been BJP’s oldest ally. Interestingly, while Shiv Sena hasn’t withdrawn either from the central or state government, the party has declared it will into the 2019 general elections all alone. The party also adopted a political resolution and said it will contest all elections in the future on its own. 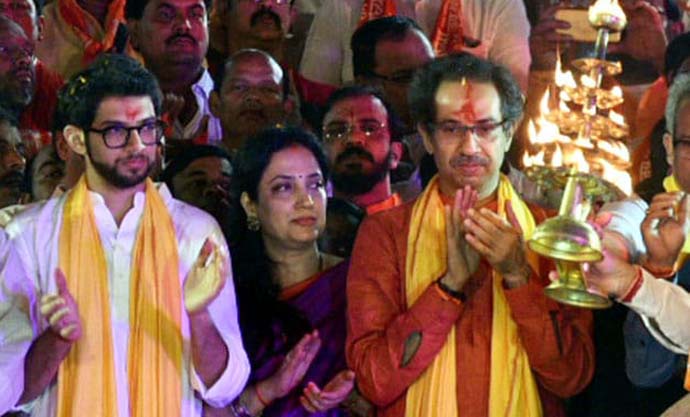 Shiv Sena chief Uddhav Thackeray’s recent visit to Ayodhya only added to the growing tension between the two parties.

TDP president Chandrababu Naidu quit the NDA after Andhra Pradesh was denied special status by the BJP-led central government. The party fought the Telangana Assembly election in alliance with the Congress. Chandrababu Naidu walked out of the NDA over the demand of special status for Andhra Pradesh. (Source: PTI)

Jana Sena Party president and film actor Pawan Kalyan has announced that his party will contest 2019 elections in all the constituencies where it is strong both in Telangana and Andhra Pradesh.

JSP had supported the TDP-BJP alliance in the 2014 Lok Sabha and Assembly AP elections. In 2014, Kalyan had addressed rallies with Narendra Modi and Chandrababu Naidu.

Kalyan has accused the BJP of practising vendetta politics by conducting IT raids against him, for expressing dissent against the Centre.

The S Ramadoss-led Pattali Makkal Katchi (PMK) was with the BJP in 2014 Lok Sabha elections.

Ramadoss wanted his son Anbumani to be inducted in the Modi Cabinet but the BJP didn't entertain his demands, a demand the BJP did not oblige on.

In the run up to the Tamil Nadu Assembly election, the two parties found their differences out in the open when PMK insisted that the BJP accept Anbumani as the chief ministerial candidate.

DMDk has ruled out the possibility of contesting the elections in alliance with the BJP.

Kuldeep Bishnoi, son of former chief minister Bhajan Lal’s son, had fought the 2014 Lok Sabha elections under the NDA umbrella. Not a single HJC candidate, including Bishnoi himself, could win the election. Kuldeep Bishnoi's HJC walked out of the NDA and merged with the Congress in 2016. (Source: India Today)

In the 2014 Assembly election, HJC managed to win only two seats in the 90-member Assembly. In 2016, HJC merged with the Congress.

Ally since 2016, Kerala-based Janadhipathya Rashtriya Sabha (JRS) quit the NDA in October 2018. Tribal leader CK Janu said the alliance was called off because the BJP betrayed the JRS over the last two-and-a-half years.

Farmers’ leader and Swabhimani Paksha president Raju Shetti left the NDA in 2017 alleging the BJP had cheated on the farmers. Shetti slammed Prime Minister Narendra Modi, saying that the farmers were cheated by promising double input cost as minimum support price (MSP) for their produce.

The BJP left the 15-year-old alliance in Nagaland with the Naga People’s Front (NPF) to forge a coalition with the Nationalist Democratic People’s Party.

In March this year, Benoy Tamang faction of the Gorkha Janmukti Morcha (GJM) pulled out of the NDA alliance accusing the BJP of betraying the trust of Gorkhas.

However, the Bimal Gurung faction of the GJM is still with the BJP.