Assembly polls verdict: BJP thought Ram Mandir dreams would distract voters from their problems. Now, it has a problem

Voters are not fools, as every party makes the mistake of assuming.

In the BJP’s increasingly shrill rhetoric ahead of the recent Assembly polls, some notes could be heard over and over again — Nehru-Gandhi, Ayodhya, Rahul Gandhi’s Hindu-ness, or the lack of it.

There was very little of the energy and promise of the pre-2014 ‘acche din aane waale hain’— this time, the campaign was around two repetitive themes of ‘Congress is bad, Hindutva is best’.

The campaign did not work. The party’s candidates were defeated in half the seats its new ‘star campaigner’, Yogi Adityanath, went to. (Photo: PTI/file)

The BJP lost power in Chhattisgarh, Rajasthan and Madhya Pradesh. The party’s candidates were defeated in half the seats its new ‘star campaigner’, Yogi Adityanath, visited.

In Rajasthan, the state’s — and the country’s first ever — cow welfare minister lost from the Sirohi seat. In Alwar, which had become the hotbed of cow vigilantism and where Pehlu Khan, Rakbar Khan and Umar Khan were lynched by ‘gau rakshaks’, the BJP won 2 out of 11 seats.

So, can the elections be read as a vote against the Hindutva rhetoric?

No, there were many other factors influencing these elections. The BJP was battling anti-incumbency in all three states. Rajasthan and Madhya Pradesh are the few states where the Congress actually has a popular, visible regional leadership. Unemployment, and acute farm distress, were major poll issues in all these states.

The BJP had no answer for any of these.

Pushed into a corner, it did what it does best — go out all guns blazing with Hindutva.

But what the polls seem to suggest is this — Hindutva does not work as a solo offering. Served as garnishing, or alongside another dish — of ‘vikas’, ‘corruption-free governance, ‘2 crore jobs’ — it is tempting. But the voter is not a fool, and visions of a glorious Ram Mandir will not distract her from unpaid loans, joblessness, fields than can’t feed.

There are many promises that the BJP made, and did not keep. Instead, it made grand announcements, which could not be implemented, adding salt to the wound. PM Modi had promised to double farm incomes by 2022. On the delivery front, the Centre has announced a hike in MSPs, which is yet to be implemented and which farmers anyway say is not enough.

In Rajasthan, the state government offered farm loan waivers, but was so cash-strapped that it put very strict conditions to avail it.

In Madhya Pradesh, Shivraj Singh Chouhan announced the Bhavantar Bhugtan Yojana — where the government would pay farmers the difference between the MSP and the rate at which they sold their produce — but had to drop some crops from the scheme after the Centre reportedly refused to give its share of funds.

In Chhattisgarh, the MSP set by the government for many crops in the Kharif season was less than the price being paid by contractors.

Unemployment, too, was acutely high in all three states.

In such a scenario, the PM in his poll rallies mentioned how Kartarpur went to Pakistan because the Congress didn’t care about religious sentiments, and Adityanath chose to discuss Lord Hanuman’s caste. 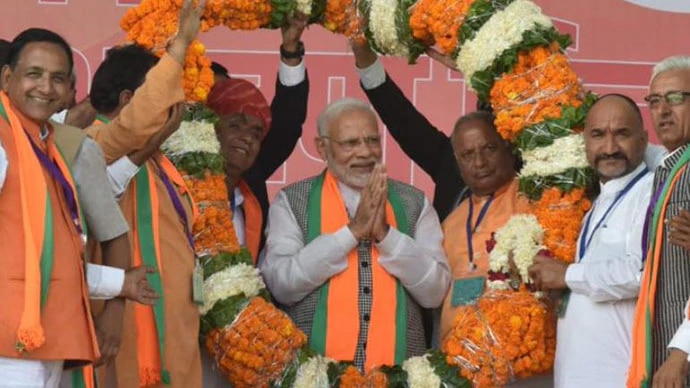 He has promises to keep. (Photo: Twitter/@narendramodi)

The BJP had a sharply polarised rhetoric in the 2017 Uttar Pradesh polls too, but there, the party was also promising ‘freedom from years of misrule’ by the SP-BJP.  And it romped home to a massive victory.

Also, Hindutva itself seems to have run away from the BJP and acquired a life of its own.

In Uttar Pradesh, after the Assembly poll results, curious hoardings came up proclaiming Modi as a ‘jumla-baaz’ and Yogi Adityanath as the true champion of Hindutva. In Rajasthan’s Alwar, even Hindus were irked with the BJP, apparently because the cow protectors were not getting a free rein and “innocent men” were being put in jail for the murders of Pehlu, Umar and Rakbar. The anger against figures of authority manifested itself in the brutal violence that took the life of an inspector in Bulandshahr. The riotous mob proved how rampant Hindutva could easily trample over the PM's 'good governance' model itself.

The BJP, thus, has clear lessons to learn. Hindutva is still potent, still effective, but is not enough to see it through. In addition, those the party has thus emboldened are now turning around to bite it back.

Ahead of 2019, the BJP needs to find another new shiny covering to package Hindutva in. Also, it needs to regain control of the narrative — for the party to reap electoral benefits from it, it needs to remain the only champion of Hindutva, a Hindutva it can control, one that it can speak for.