The enigma of elections: No one knows why, but everyone fakes it

No, it's not possible to accurately analyse exactly what happened in the Assembly polls. But we can foretell what's coming now.

Frankly, no matter how much anyone pretends to understand Indian politics, the fact is that no one has the faintest idea of what really works with the electorate, why people vote the way they do, why election results are what they are. The casuistry that is on display to explain election results is quite breathtaking in its sophistry, as is the intellectual gymnastics performed by analysts. Everyone seems to have a plausible explanation for what happened in the elections and why it happened — but the fact is that everyone reads the results to suit their predilection or their prejudice. 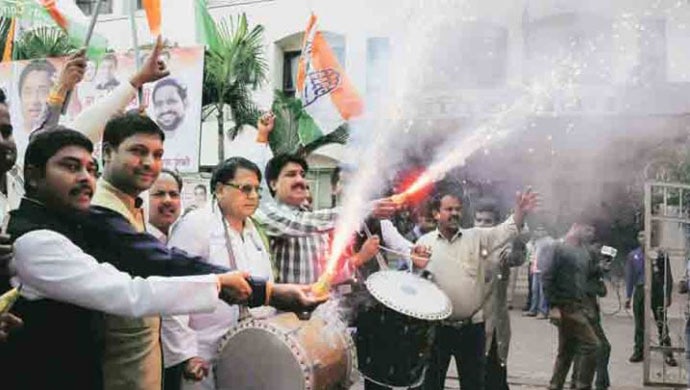 Whose party is it anyway? It depends on where you're looking from. (Photo: PTI)

Depending on what side of the political divide you are, the same result will be read by one side as the failure of hard Hindutva and by the other side as the half-hearted adherence to the Hindutva agenda. Indian elections are like the proverbial elephant in a dark room, and analysts and pundits are the blind men in that room, feeling the elephant and making it out to be what they imagine or desire — not what it is. Indian politics is just like that elephant — and everyone trying to describe it. (Photo: Wikimedia)

But because such analysis is so much fun, here is another of those ‘blind men’ trying to make some sense of Indian politics and the Indian voter.

To describe the jolt that the BJP received in the three states of MP, Chhattisgarh and Rajasthan as a wake-up call before the 2019 General Elections is clearly the understatement of the year. But deducing the trajectory of the 2019 polls from these results would tantamount to a flight of fantasy, simply because of the mysterious ways in which Indian politics plays out. Therefore, it would be very premature to proclaim that the verdict on December 11 is the beginning of the end for the BJP’s chances in 2019. If the past is any guide, then in 2003, even though the BJP won all these states, the next year, it lost the general election. Under him, one minute, India was 'shining'. The next minute, he had lost the elections. (File photo: Reuters)

A lot will depend on the arraignment of political forces going into the General Elections. The BJP very much remains the party to beat. But one doesn’t need to be a rocket scientist to figure out that if the opposition can cobble together a coherent and credible alliance, then 2019 will be anything but a cakewalk for the BJP.

For its part, the BJP can either spin its defeat as a ‘moral victory’ — a bit like the Congress on Gujarat — or it can do some serious strategising to fix the problems that seem to be impacting its electoral prospects.

The problem, however, is that no one is very sure what the problem is, much less how to fix it.

For instance, there has been a lot of talk of rural distress. But one analysis claims that while the BJP had a stellar performance in building rural assets, it wasn’t able to increase incomes. The same analysis also reveals that during the UPA years, rural incomes rose quite impressively. So, if the BJP, despite building rural assets, lost because incomes didn’t grow, the Congress lost despite double digit growth in incomes. Figure that out as best as you can, especially in light of the fact that the BJP did quite well in Mandsaur, the area of MP touted as the epicentre of the agitation over rural distress. 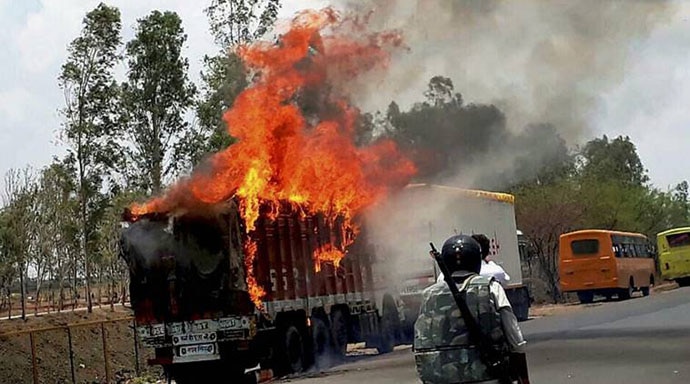 Farmers protested against the BJP government in Mandsaur. But, by the polls, they seem to have gotten over it. (Photo: PTI)

On social issues, a lot was made about Rajput disaffection with BJP — one exit poll even pointed to how big the BJP was losing in the Mewar region. And yet, the results are completely opposite to what was being projected by the pollsters. So, what explains this? Of course, the pundits will tailor their superficial, if also specious, analysis according to convenience — but it won’t really tell anyone anything worthwhile.

While it is virtually impossible to say honestly what went wrong in the elections, there are a few things that at least I believe the BJP needs to address to get back its electoral mojo.

The first is that the party apparatchiks need to get rid of their hubris and temper their arrogance. Rationalising defeat by pointing to the neck-and-neck voting percentage is a mug’s game, because it hides the fact of how much the vote share has come down from the last election. While it is entirely understandable for political parties to put up a brave front even in the face of defeat, it is a grave error to become a victim of your own propaganda. A big problem in the BJP has been its lack of receptivity to contrarian ideas. In fact, anyone with contrarian views or critical of certain policies has been immediately lumped as an enemy. As a result, there is hardly anyone who speaks frankly in party forums and tells the leadership where it is going wrong. And if someone has the temerity to do so, he is sidelined and treated as a pariah. Can you spot the dissenting voice? (File photo: PTI)

The worst mistake a party can make is to believe its own hype about its performance. It is all very well to trot out fancy statistics and lay out all the wonderful policies and schemes that the government introduced and sell them as vote winners — but what matters is whether these schemes and policies are affecting and changing the lives of the people, and instilling a sense of well-being in them. Although anecdotal, in my interactions with all my friends who are in business and industry, I haven’t yet met anyone who is happy with the government. The common refrain is that business is down, something which is at variance with the fancy growth numbers being churned out. Unless now 7% is the new 3.5-4% growth, one would have imagined it to reflect in creation of jobs, more business opportunities, more prosperity, greater sense of well-being. But that is absent.

When this is told to members of the ruling party, the standard response is that they first get offended, and then get offensive. The GST is a very good reform. But what is it about the government that it simply doesn’t understand the need to simplify the procedure and the structure of GST, which is causing enormous problems to trade and industry?

What should really worry the BJP is the fact that its leaders, including its mascot and icon — Prime Minister Narendra Modi — are today being ridiculed and lampooned through jokes and memes which are circulating like wild fire on social media. This, more than anything, is a tell-tale sign of the mounting anger against the tall claims of the government which clearly haven’t impacted the lives of people on the ground. He's looking serious. Has he heard of the memes on him? (Photo: Reuters)

One metric to judge the failure to meaningfully transform the lives of people is the emphasis that is now put on ideological issues, as opposed to the emphasis that was put on economic, governance and development issues in 2014. While lip-service is still paid to cause of ‘vikas’, there is a discernible shift to consolidating the vote bank by polarising society. This is not just having a negative impact on the economy of people —the results in the Alwar region is a marker — but is also spooking many supporters of the BJP who might oppose the blatant minorityism of the Congress, but do not necessarily support the brazen minority-bashing of some of the storm-troopers linked to the ruling party.

The BJP needs to figure out a way of keeping its core constituency but also understand that this isn’t going to be enough to win elections.

Without enlarging its support base beyond its core constituency, which means moderating its stand on some ideological issues and focusing on bread and butter issues, the BJP will find getting the extra voters an uphill task, what with its anachronistic economic policies, antediluvian social policies and uninspiring leaders like some of its chief ministers. Even the core constituency is getting miffed by the way the BJP has handled some ideological issues — it is almost as though the BJP wants to keep these issues as hanging fire and milk them till kingdom come. And in the meantime, instead of using its executive and legislative powers to sort out issues like the Ram Temple, they have unleashed their army of lumpen elements to polarise voters through hate-mongering. 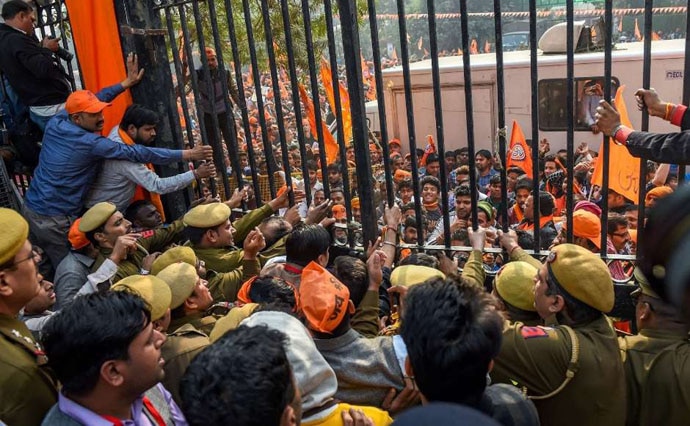 Instead of doing anything positive, the right wing is just pushing at the idea of the Ram Temple. (Photo: PTI)

The fear is that instead of taking corrective action to recover lost political ground and rebuild political support, the BJP will double-down on the policies that have brought it to this pass. This means more pro-poor ‘schemes’ that actually enrich the entrenched and make little difference in uplifting the target population, more populist slogans with little means of delivering, more promises that will never be kept, more polarisation that will make governance even more difficult in the years ahead, and more voodoo economics of the socialist type that will prevent the economy from taking off.

The tragedy is that those who want to replace the current dispensation will also do the same.

Post your comment
#BJP, #Congress, #Lok Sabha election 2019, #Assembly election results 2018
The views and opinions expressed in this article are those of the authors and do not necessarily reflect the official policy or position of DailyO.in or the India Today Group. The writers are solely responsible for any claims arising out of the contents of this article.