Atal Bihari Vajpayee: A true democrat, an unsparing critic and a friend of political rivals

Atal Bihari Vajpayee will be remembered for many things. As a democratically elected Prime Minister, one of his everlasting legacies would be his healthy respect for rivals, including Congress stalwarts, from Jawaharlal Nehru to Sonia Gandhi.

Unsparing in his criticism, Vajpayee is said to have attracted the attention of the country's first Prime Minister when he sought a special session of Parliament in the middle of the India-China War in 1962. Nehru conceded and debated the issue even though he was on the defensive. However, Vajpayee, till the end, never hesitated in praising "Pandit ji" at home and abroad. 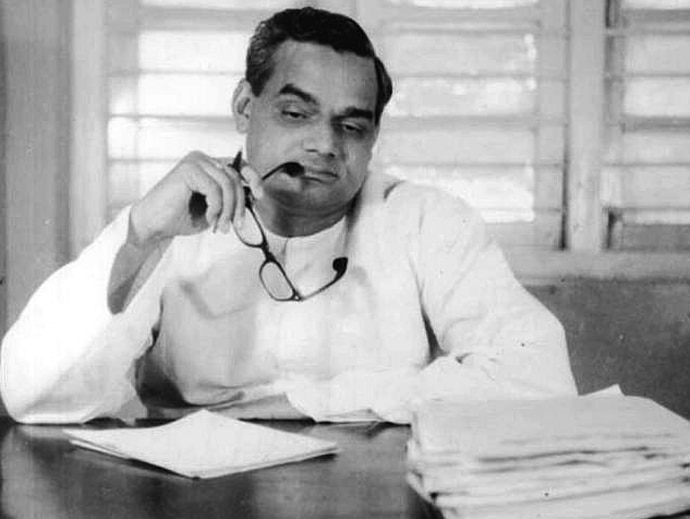 From a young critic to an astute leader: Atal Bihari Vajpayee. (Credit: Twitter/@IndiaHistorypic)

In fact, when Vajpayee became foreign minister in the Morarji Desai government in 1977, he asked officials to restore a portrait of Nehru on the wall behind the foreign minister's table and chair. Some over-zealous babus had removed Nehru's portrait as the first non-Congress government was formed at the Centre.

When Bangladesh was created in 1971, Vajpayee described Indira Gandhi as "Abhinav Chandi Durga" for defeating Pakistan in the war. Vajpayee's description of Indira as Durga helped the Congress Prime Minister cultivate a larger-than-life image. Indira had admitted to her friend and biographer, Pupul Jayakar, that she had had some intimations of "supernatural powers throughout the war and even previous to it, having had strange experiences". 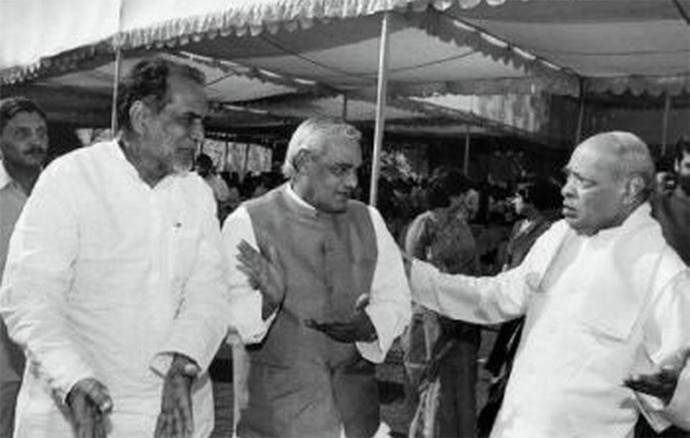 In an article titled, "Kiski Puja Kar Rahen Hain Bahujan?" (Who are the lower castes worshiping?), Prem Kumar Mani, a Dalit activist had recalled how communist leader SA Dange had protested against the 'Durga' tag given to Indira and reportedly told Vajpayee, "Atal Bihari does not know what is he saying and Indira Gandhi cannot understand what she is listening. Both should know that Chandi Durga massacred Dalits and backward classes."

Three days after PV Narasimha Rao's death, Vajpayee on December 26, 2004, made an important disclosure, crediting  Narasimha Rao as the "true father" of India's nuclear programme. Vajpayee was in his hometown, Gwalior, that day to participate in a writers' meet. Sounding a tad emotional,  Vajpayee revealed that when he assumed the Prime Minister's office in 1996 (the 13-day stint), he received a paper from his predecessor, urging him to continue the country's nuclear programme.

"Rao had asked me not to make it public. But today when he is dead and gone, I wish to set the records straight." In typical Vajpayee fashion, the former Prime Minister went on: "Rao told me that the bomb is ready. I exploded it. I did not miss the opportunity."

Vajpayee said he never blamed the Congress on this count. "They, too, wanted a strong India to counter Pakistan and China. In foreign policy matters, they never lacked a commitment," Vajpayee had said, oblivious of the future where, barely 10 years later, his own party's leadership would consistently blame the Congress for all the ills in the country.

Vajpayee had reason to have healthy regard for the Congress leadership. In 1994, when Pakistan was making a big issue about alleged human rights violations in Jammu and Kashmir at international forums, Narasimha Rao sent Vajpayee as the leader of the Indian delegation to the 1994 session of the Human Rights Commission at Geneva.  The image of a triumphant Vajpayee hugging Salman Khrushid (India's junior foreign minister then) after returning from Geneva on the India Today magazine cover are etched in many minds. The Indian side: Vajpayee with Salman Khurshid at Geneva in 1994. (Credit: India Today)

Vajpayee had fought bitter political battles with Rajiv Gandhi over Bofors, Shah Bano, the Ayodhya dispute, etc., but when the former prime minister was killed in a bomb explosion at Sriperumbudur in May 1991, Vajpayee called noted interviewer Karan Thapar to disclose that when Rajiv Gandhi was the prime minister (1984-89), he came to know that Vajpayee was suffering from an acute kidney ailment and required specialised treatment abroad. Vajpayee recalled to Thapar how one day, Rajiv called him up and said he was including Vajpayee in India's delegation to the UN. “He [Rajiv] hoped I would use the opportunity to get the treatment I needed. I went to New York and that's one reason I am alive today," Vajpayee told Thapar in a TV interview.

At another occasion, Vajpayee chose to name Sonia Gandhi while speaking in New York in 2002. He  recalled that when the Indian Parliament was attacked by terrorists on December 13, 2001, Sonia Gandhi had phoned PM Vajpayee to ask: "Where are you, are you okay? I am okay, are you okay too?"

Sonia was leader of the Opposition then.

"This is the greatness of Indian democracy," Vajpayee told his audience. "We have differences in our politics but the whole world also believes that India is moving unitedly ahead." Mutual respect: Vajpayee with Sonia Gandhi whose growth as a politician Vajpayee is also credited for. (Credit: AP photo)

In some ways, Vajpayee was instrumental in shaping Sonia as an astute politician. (I have mentioned the episode in my book Sonia A Biography; Penguin, 2003; pages 94-95). Vajpayee had chosen Sonia as leader of an Indian delegation to the USA in June 2001, that turned out to be a milestone of sorts for an otherwise somewhat hesitant and diffident Sonia, the politician.

Sonia Gandhi was then leader of the Opposition. Her elevation as Indian representative to the UN AIDS Conference caused heartburn within the BJP-NDA. Vajpayee’s health minister CP Thakur was hoping to lead the delegation and he reportedly sulked.

A high point came for Sonia when she had an one-on-one meeting with US Vice President Dick Cheney. In a series of meetings, press interactions, etc., Sonia consciously avoided bringing in domestic politics or her ideological differences with the BJP. She kept harping on the theme of a national consensus on tackling poverty, diseases and stabilising population.

Sonia developed a lot of respect for Vajpayee — and both Priyanka and Rahul continued to have the highest regard for the former Prime Minister. In private conversations, Rahul often rued that he did not get much chance to interact and learn from Atal Bihari Vajpayee.

Also read: Atal Bihari Vajpayee – A politician who was loved across party lines