With the Supreme Court paving the way for an early verdict, the politics around Ram Mandir is already getting a jumpstart.

A three-judge Supreme Court bench, headed by CJI Dipak Misra on September 27 ruled that the 1994 Ismail Faruqui judgment need not be referred to a larger bench.

In a majority 2:1 judgment, the SC declined to revisit its own 1994 ruling.

CJI Dipak Misra and Justice Ashok Bhushan denied the plea, saying the 1994 ruling was made in the context of acquisition.

Justice Bhushan, reading out the judgment on behalf of the CJI, said the earlier order of mosques not being integral to Islam was in the context of the State's right to acquire land under eminent domain. He said the earlier judgment has no bearing on the final Ayodhya verdict and hence, there was no need to reconstitute a new bench.

Since the earlier judgment was only with respect to immunity from acquisition, it would not impact the Ayodhya land title suit. The 1994 Ismail Faruqui judgement had held that a mosque is not an essential part of the practice of Islam. (Photo: PTI)

A three-judge bench will continue to hear the Ayodhya land title dispute and the hearing will resume from October 29.

However Justice Abdul Nazeer dissented with his brother judges and said whether a mosque was integral to Islam needed a comprehensive examination and there was a need to refer the matter to a constitutional bench.

He said what is essential to religion as laid down in the Ismail Faruqui case was arrived at without a comprehensive examination of religious texts. Hence, the issue needs to be re-examined in detail.

He also said that the observations in the 1994 ruling have permeated the Allahabad High Court Ayodhya verdict of 2010 and the judgment needs to be brought in line with the Shirur Matt case.

In 1994, while hearing a petition of Dr Ismail Faruqui, a five-judge Supreme Court bench held that a mosque is not an essential part of the practice of Islam. It said that namaz could be offered anywhere and a mosque was not required for it.

Dr Faruqi had challenged the acquisition of 67.7 acres land around the disputed structure.

The judgment paves the way for the resumption of the Ayodhya case and the timing of the verdict could alter the results of the 2019 Lok Sabha Elections. 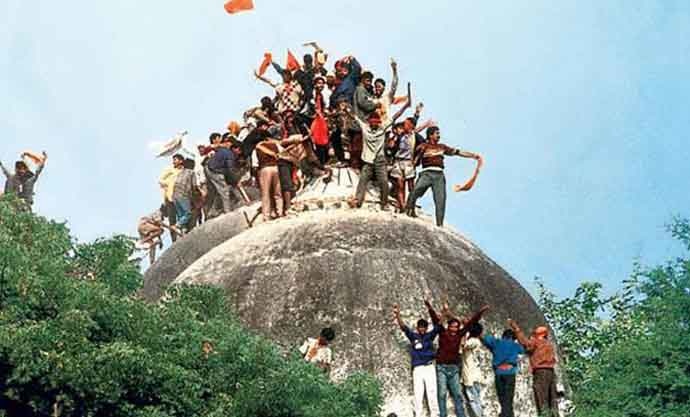 With the ruling BJP under the leadership of Narendra Modi already promising a Ram Mandir in its 2014 election manifesto, politics around the Ayodhya case will only heat up in the coming days.

The most significant aspect of the post-Babri Masjid political landscape was the changed social fabric of Indian society.

While communal strains between both Hindus and Muslims had always been there, the demolition and the subsequent communal violence displaced caste with religion in the political discourse.

The BJP was successfully able to take on caste-based parties like Mulayam Singh Yadav's SP and Lalu Yadav's RJD.

The party's dream of cobbling together a cohesive Hindu vote bank was finally taking shape.

After losing out to the Congress in 2004, and subsequently in 2009, the BJP had to fall back on its 'Hindu hriday samrat', Narendra Modi, to bring the party back to power.

Going into 2017's Uttar Pradesh Assembly elections without a CM face, the BJP eventually zeroed in on another firebrand Hindutva leader, Yogi Adityanath, to head its government in the state. 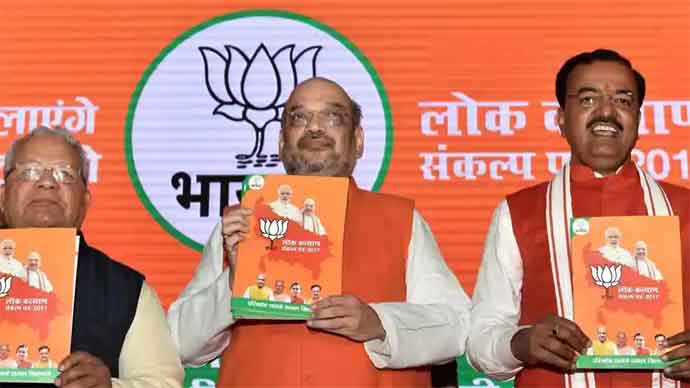 Mandir Wahin Banayenge: Ram Mandir has been a part of the BJP's poll manifesto. (Photo: PTI)

The party reaped a rich harvest of votes focusing its campaign on the so-called Hindu exodus in Kairana, love jihad and the preservation of cows.

But the last four years again altered the political landscape and threw a new set of challenges to the BJP.

With its 2014 promise of 'achhe din' gone out to pasture, the party is faced with alleged corruption and nepotism charges, lack of jobs, and the politically suicidal price rise.

All issues it had earlier taken up the Congress on.

The BJP also went back on its poll promise of scrapping Article 370, when it decided to put it on the back burner to form a government with PDP in Jammu and Kashmir.

Probably realising the importance of ramping up the issue again, the party decided to walk out of the alliance in 2018 citing irreconcilable differences.

Putting the blame for all that ails the country at the doorsteps of Nehru and the Gandhis is not bearing fruit anymore.

The Narendra Modi government is expected to provide a list of its own achievements, something it is finding increasingly hard to do.

Earlier asking for just five years to prove himself, the Modi government seems to have set a new deadline of 2022, but the voters are not taking the bait.

It is also faced with a united Opposition, which, having realised the dangers of a united Hindu vote bank breaching its own political fortress, have come together to stop Modi from getting a second term.

The 2017 by-poll defeats in Kairana, earlier held by the BJP's late MP Hukum Singh, who had floated the now debunked Hindu exodus theory, the Gorakhpur and Phulpur seats, vacated by the party's UP CM and Deputy CM, at the hands of a united Opposition, has put the party on the back foot.

The prospect of SC/STs, OBCs and Muslims coming together is a nightmare the BJP could do without.

A favorable verdict in the Ayodhya case could be a major shot in the arm of the the Narendra Modi government which had earlier been accusing the Opposition, and especially the Congress, of minority appeasement.

While the official party line is Ayodhya is a matter of astha (belief), the political benefits are not lost on the party. In an attempt to reassure its Hindutva vote bank, several leaders of the BJP have already said that the party could also take an ordinance route if the Ayodhya judgment was not favourable.

With the Supreme Court paving the way for an early verdict, the politics around the Ram Mandir is already getting a jumpstart.

#Namaz, #Supreme Court, #Babri Masjid demolition, #Ayodhya dispute
The views and opinions expressed in this article are those of the authors and do not necessarily reflect the official policy or position of DailyO.in or the India Today Group. The writers are solely responsible for any claims arising out of the contents of this article.