Jharkhand by-polls: Why it is a good time to be Babulal Marandi

It will be interesting to watch Babulal Marandi in his second innings, especially since he still retains the distinction of being perceived as Jharkhand’s most effective Chief Minister so far.

There are only a handful of first premiers of Indian states still around. Fewer still, who have retained their popularity for over a decade, while repeatedly getting robbed of power. Beginning his political career as the Sangh’s poster-boy in undivided tribal Jharkhand, Babulal Marandi rightly earned his place as the state’s first Chief Minister when it got separated from Bihar in November 2000. Even though he had to step down just over two years later, he can rightfully boast of an eventful and eventually fruitful political journey.

Stepping away from BJP in 2006, he did well to capture 11 seats and 9.1 per cent vote share in the 2009 Assembly Elections within three years of conceiving the Jharkhand Vikas Morcha (JVM). Most of these winning MLAs were later wooed by the BJP. But with Pradeep Yadav of Poreyahat constantly beside him, he rebuilt the party and braved the decimating Modi wave of 2014 to grow his vote share to 10.2 per cent, managing a tenth of the available 80 seats as well. A little short of an absolute majority, BJP was again successful in wooing six out of the eight winning JVM MLAs, leaving Babulal Marandi with the only option of legally challenging the move. 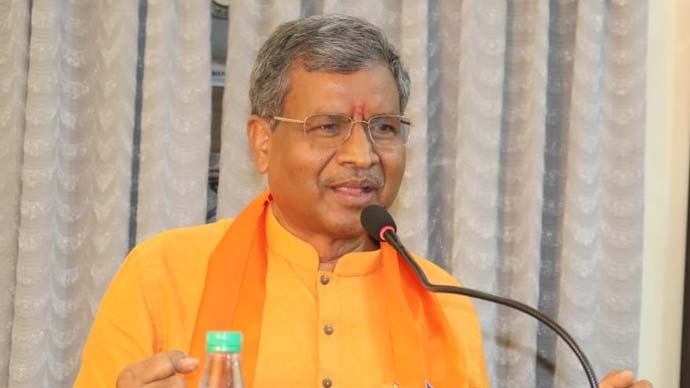 In 2019, as JVM finally succumbed to an all-time low of three seats, even the top leadership ran out of patience. When popularity and power failed to reach an equilibrium, they reached an agreement. While Pradeep Yadav and Bandhu Tirkey favoured the incumbent Congress, BJP’s prodigal son, Babulal Marandi, finally returned home with his followers in tow, but with no other elected representatives to account for. Though it’s not new for BJP to assimilate some very tall leaders from other parties, it is unprecedented for them to be accepted unconditionally and appointed its official face in the same move. While this alone might be testimony of Babulal Marandi’s ever-growing popularity and universal acceptability, acceptance at the highest level doesn’t always translate to acceptance among the party cadres.

We saw how being denied the premiership of Madhya Pradesh made Jyotiraditya Scindia jump ship mid-session, along with almost two dozen MLAs, and help topple the Kamal Nath government. Yet, even that would not be enough for him to earn the same in reward from his new bosses, because Shivraj Singh Chouhan was first in line to be BJP’s official face. With Raghubar’s departure from the centre-stage, even though this wouldn’t exactly translate into a ‘two swords in a sheath’ situation, there might have been several remaining aspirants for the top spot, who would’ve seen their candidature getting dwarfed with Marandi’s arrival.

Sometimes, these voices cluster together and shape a dissent; at other, the ruling rivals (read Jharkhand Mukti Morcha) do not just fail to exploit these fault lines but also amateurishly allow it to manufacture a collective voice of dissent from the ranks of a recently restructured BJP. Only this time, they stand together to defend Babulal Marandi’s right to be recognised as the leader of Opposition in the House. Hence, the perfect atmosphere for the state BJP unit to not just accept but factually rally behind their new face. The denial to accept his position as the leader of Opposition in Jharkhand Assembly is therefore merely a delay that Babulal Marandi would be happy to accommodate considering how smooth it has made his own assimilation within the party.

The days Raghubar Das spent in his office only helped simmer the dissent of the upper-caste and tribal vote-banks towards the party. Most upper-caste voters were back home supporting Modi’s BJP as soon as they were done venting their anger in the polls. Or in other words, as soon as Raghubar was handed a defeat at the hands of Saryu Roy. For the tribal voters, Babulal Marandi’s name suffices. It is with this confidence that the BJP is approaching the upcoming by-elections in Dumka and Bermo. In the recently conducted Rajya Sabha elections, BJP state president, Deepak Prakash, gained the support of 31 elected members including that of Saryu Roy, the most loyal rebel the party has seen and AJSU — an ally in the Lok-Sabha which couldn’t see eye-to-eye with Raghubar Das during the Legislative Elections.

Even the most optimistic supporter of the ousted BJP unit knows that 33 is far from the magic figure of 41, which it needs in order to cross the halfway mark in Jharkhand Assembly. Looking at these numbers, Babulal Marandi’s return to Jharkhand’s helm might appear distant. But the key to that return lies in the many cases of dissent (publicised and unpublicised) among the incumbent INC MLAs. The state is already aware of an episode of all four ministers of INC teaming up to visit Hemant Soren in his office to negotiate more leeway in selecting their officers and doing their job, but being denied his immediate audience. Add to that the trip that INC MLA from Jamtara, Irfan Ansari made to the AICC office along with two other MLAs and Rajya Sabha member Dhiraj Sahu, to voice their collective dissent. When a popular Hindi daily further aggravated the situation by publishing a piece hinting that it is only the INC MLAs hounding the CM for favours and transfer postings, an intervention from the party’s national leadership became even more imperative.

The Congress as a party is yet to collectively respond to any of the above. In not tending to these fault lines with any greater urgency than they did with Rajasthan or Madhya Pradesh, INC leadership is only digging its own grave. Given these circumstances, if Jharkhand comes to an encore of MP or Rajasthan, it would be unfair to blame the BJP if the incumbents couldn’t keep their house in order while they are still ahead.

Babulal Marandi echoed similar sentiments when he announced his decision to not contest from Dumka. In a media interaction recently, he said, “I am an MLA from Rajdhanwar. So why should I contest from Dumka? I do not have to prove the support base as I have defeated JMM President Shibu Soren and his wife in Dumka Lok Sabha constituency in the past. I personally do not have to contest elections to defeat their progeny. The BJP candidate will defeat the Soren family member in the Dumka.”

Jharkhand is a state to watch out for, post the by-polls. It will be equally interesting to watch Babulal Marandi in his second innings, especially since he still retains the distinction of being perceived as the state’s most effective Chief Minister so far.

#Jharkhand vikas morcha, #Jharkhand by elections, #Bharatiya Janata Party, #Babulalmarandi
The views and opinions expressed in this article are those of the authors and do not necessarily reflect the official policy or position of DailyO.in or the India Today Group. The writers are solely responsible for any claims arising out of the contents of this article.