How the election heat in neighbouring Bangladesh is seeping into India

Once in the electoral fray, the BNP will prove to be a formidable Opposition causing serious challenges to the Awami League.

Dhaka is steadily hotting up with hectic political activities as the parliamentary polls draw nearer. Elections will be held either end of this year or early next year. The main Opposition party, the Bangladesh Nationalist Party (BNP), which was lying dormant and dysfunctional till late, has suddenly embarked upon a flurry of belligerent political activities and appears to be getting direction from some powerful lobby belonging to the hostile quarters against the prime minister.

The BNP was in political hibernation until recently as its party supremo, former prime minister Khaleda Zia, is in prison and believed to have suffred a mild stroke recently rendering her politically irrelevant in the context of election campaigning. As is common knowledge, Khaleda Zia is facing serious graft charges and continues to be prosecuted, notwithstanding the fact that her party has engaged a high-profile British lawyer to contest the case on her behalf. What appears significant, however, is the BNP's overtures to India for support and “guidance”. The BNP is still undecided if it would at all contest the elections or not. To woo India, the BNP sent a three-member delegation to India last week under the leadership of former commerce minister,  Amir Khosru M Chowdhury, and two other senior party functionaries.

During their New Delhi stay, they held long parleys with several think tanks, including the Institute for Defence Studies and Analyses (IDSA), Observer Research Foundation (ORF) and Vivekananda International Foundation (VIF). The visiting BNP team vehemently criticised the Sheikh Hasina-led Awami League government for their alleged role in exterminating their political adversaries in the name of nabbing drug traffickers who are involved in smuggling of drugs from across the border, especially from Myanmar, drawing all-round condemnation from various human rights groups.

The BNP delegation also tried to highlight the alleged corruption cases involving Hasina and her cohorts on various counts. Their tenor, during the interactions, was not bereft of any assertions and instead, was business like and to the point. Essentially, they wanted India to hold BNP’s hand, extending support to it during the elections. Going by the theory of elimination, it can be safely assumed that Pakistan will extend all-out support to the BNP, its long-time friend, using every possible means to subvert Hasina and her regime.

However, the Indian experts pointedly told the BNP delegation about their party's opportunistic politics — when out of power, it tries to warm up to India but once in power, it openly supports anti-India and pro-Pakistani forces, alarmingly harbouring multiple Indian insurgents belonging to the Northeast. 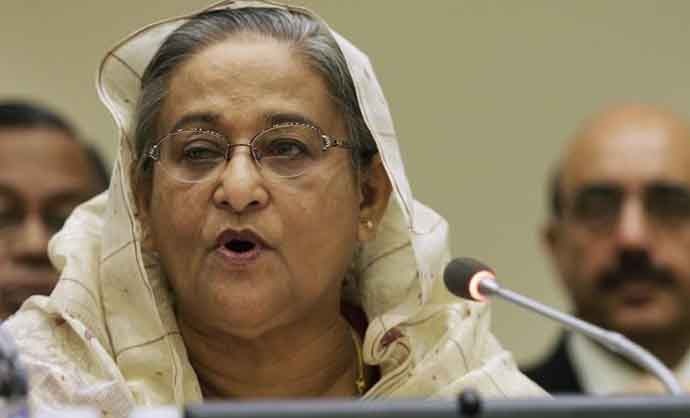 The BNP has already started recahing out to India against the Sheikh Hasina-led government in Bangladesh. [Credit: Reuters photo]

Now, in a desperate bid to come back to power, the BNP hinged on several promises in an apparent bid to elicit support. Yet, judging by the party’s past performance vis-a-vis India, the promises did not cut much ice during the interactions.

Back in Dhaka, ongoing encounters and cross-firing incidents are giving much ammunition to the BNP amid credible reports that if the Hasina government does not release Khaleda Zia before Eid, that is in a couple of days, the BNP would resort to a massive agitation subsequently galvanising a mass movement. But if she is out of prison, Khaleda Zia is expected to use all her charisma leading the movement from the front.

Once in the electoral fray, the BNP will prove to be a formidable Opposition causing serious challenge to the government in power. Therefore, Hasina needs to tread with caution to deal with the latest developments and any minor lapse of judgement or calculation, might cause a dent.

One must always remember that the BNP, while in power, had the right wing anti-India and pro-Pakistan Islamic fundamentalist party (the Jamaat-e-Islami) as its ally and partner in governance which had helped the latter to consolidate its grassroots cadres, abetting radical forces to foment terror as seen in the deadly cases in the past two years.

Meanwhile, recent reports trickling in about the killings of a couple of liberals indicate that the extremist forces may have bounced back and resorted to a renewed killing spree targeting liberals and minority communities. This can prove catastrophic if the BNP is out on the streets, especially from the electoral point of view.

For the Awami League government, to be confident on part is alright, but overconfidence in dealing with the critical issues could prove costly.

Post your comment
#India, #Awami League, #Bnp, #Bangladesh elections
The views and opinions expressed in this article are those of the authors and do not necessarily reflect the official policy or position of DailyO.in or the India Today Group. The writers are solely responsible for any claims arising out of the contents of this article.