It matters not if Maharana Pratap lost to Akbar - or Haldighati

The Mughal emperor never realised his desire: the surrender of the Rajput king or Mewar.

The hopes of the Hindu rest on the Hindu.

Maharana Pratap remains, undoubtedly, a unifying factor amongst Rajputs, ousting Maharana Sangha in living memory. When most Rajput kings had accepted Emperor Akbar as their overlord, Pratap held out!

The story of a battle is never the complete story and it matters little as to who won. A warrior must be judged keeping the entire background in mind and the accomplishment must be gauged keeping the advantages and disadvantages in mind.

Pratap’s father was Maharana Uday Singh, the youngest son of Maharana Sangha who had fought Babar, and for whom Panna Dhai had sacrificed her own son.

He was the last link, for his brother Maharana Bikramjeet was murdered. The line of the illustrious Sangha was preserved at great cost. 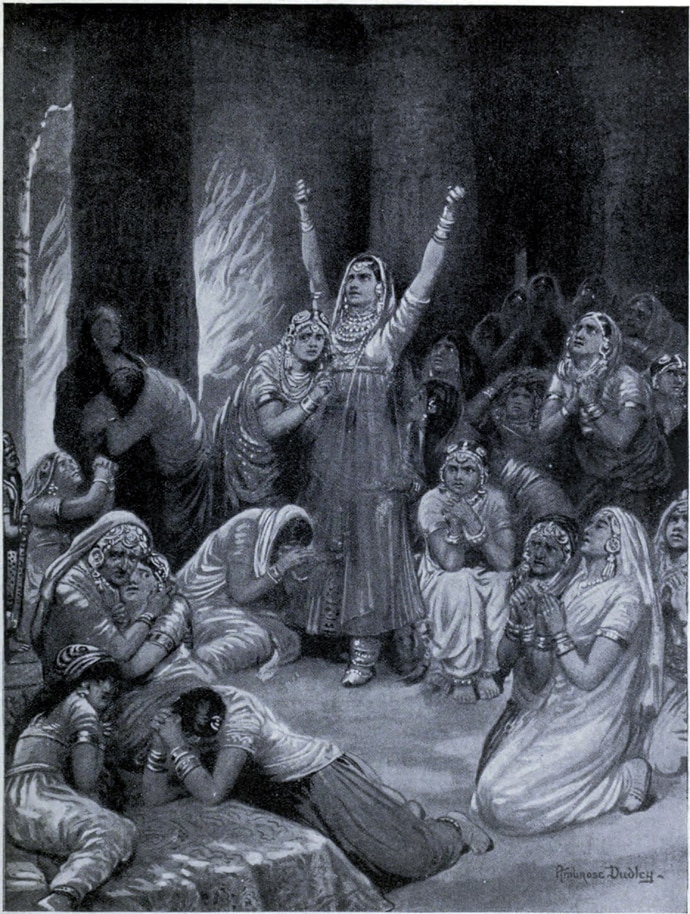 Chittaurgarh suffered a Saka made famous by the story of jauhar. Illustration from Hutchinsons History of the Nations

Chittaurgarh, the prized fort of Rajasthan, had suffered two Sakas, the one made famous by the story of Rani Padmini and the second by the story of the rakhi sent by Rani Karnavati to Humayun.

She was his eldest brother’s widow: the royal saint Mira Bai. But she failed to return to her "devar", her body having mysteriously disappeared. The escort returned with her jewellery and the golden idol of Krishna, whom she worshipped.

Had she been murdered, did she commit suicide or did the royal saint give up her soul to merge with Lord Krishna? 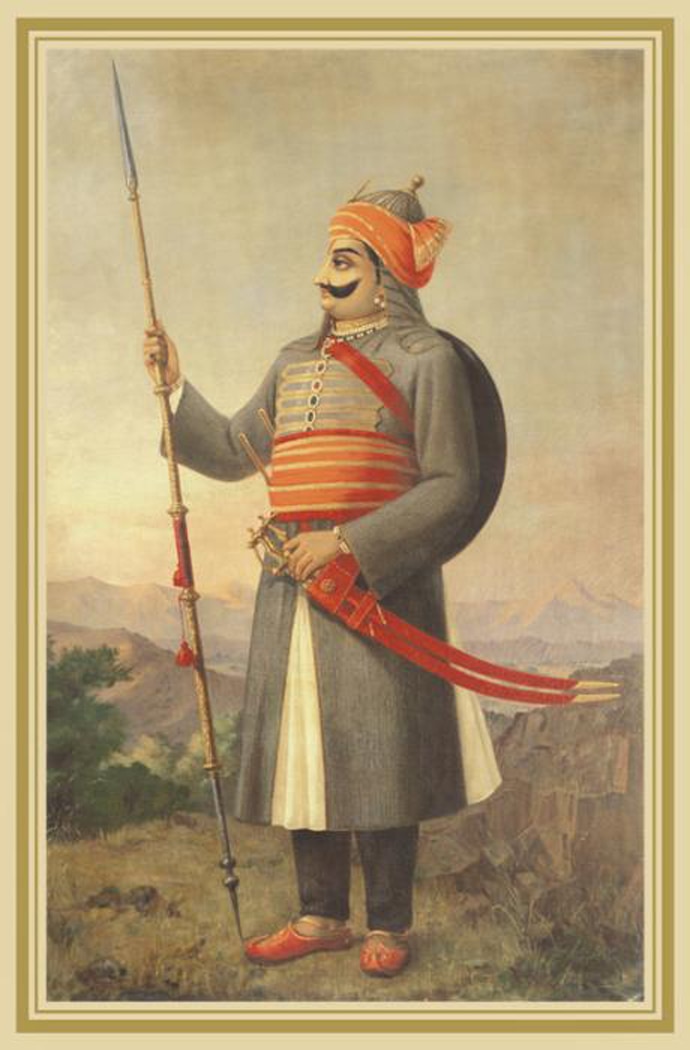 Within four years of Uday Singh’s accession, Sher Shah — founder of the Sur empire — having defeated Rao Maldeo of Jodhpur (the capital of Marwar), arrived to set up camp in the vicinity of Chittaurgarh.

Choosing discretion, Uday Singh presented the keys of Chittaurgarh to the Afghan. Sher Shah accepted, leaving a deputy behind; and Mewar in peace.

The bards lamented Uday Singh’s lack of kingly qualities. For when others die, bards gain a livelihood.

Sher Shah soon died and the keys of Chittaur remained with the Sisodias. But with the Afghan's restraining influence gone, Rao Maldeo of Jodhpur began flexing his muscles. Also waiting to test his strength was the 25-year-old Akbar, who longed to be known as the conqueror of Chittaurgarh.

Chittaurgarh’s vulnerability was obvious and, in 1559, Maharana Uday Singh began the construction of his new capital city, Udaipur.

Akbar’s conquest of Chittaurgarh was a long and ferocious battle from which the royal family of Chittaurgarh was conspicuously absent. Crown prince Pratap, then two months short of his 28th birthday, kept himself and his nine-year-old son, Amar, away. "Crown prince" is a wrong term to employ, for Uday Singh had named Jagmal, the son of his youngest queen, the heir. When the moment to crown the prince arrived, the nobles of Mewar took Jagmal by the arm and removed him from the throne. Pratap was then girded and crowned Maharana.

Chittaurgarh had already been lost. Maharana Pratap had inherited all the titles and glory, but no capital city and no money. All he was left with were the forts of Kumbhalgarh, Dharmeti and Gogunda.

But he was Maharana Pratap! And Akbar needed his personal surrender to validate the Mughal’s right to rule the Rajputs. For 25 years, Pratap successfully engaged the Mughals and their Rajput allies in guerrilla warfare fought from the mountainous tracts of Mewar.

It is said that both Raja Bhagwan Das of Amber and Raja Todarmal, Akbar’s revenue minister, took turns to persuade Pratap to give in. In hindsight, Bhagwan Das and Todarmal were wise counsellors.

At last, the final engagement took place at Haldighati on the 7th of Sawan (July 1576). The Mughal army was led by General Asaf Khan and the crown prince of Amber (new capital city Jaipur) Kanwar Man Singh. Akbar wasn’t present at the battle for he was busy with the conquest of Bengal – an extremely wealthy province and an asset to the empire.

Pratap’s army had the faithful Bhils and the mercenary soldiers of Hakim Khan Sur. Songs have been written about Pratap’s reunion with his brother Sakta on the battlefield. Sakta had long defected to Akbar’s camp.

Immortalised is the valour of Raj Rana Mana (Bida), the Jhala chief of Bari Sadri who, in an act reminiscent of the Battle of Khanua, snatched the royal umbrella from the nearly overwhelmed Pratap and made off with it, drawing the enemy away.

With the royal umbrella raised above his own head, the faithful Mana bore the brunt of the battle.

Also celebrated is the Tomar prince of Gwalior, who had been granted sanctuary in Mewar since his expulsion by Babar. With his son and clan members, Mana paid the debt of gratitude.

The rains saved the day and the Mughal army left the hills, only to return with the spring.

Kumbhalgarh was lost due to treachery. The Deora chief of Abu, instigated by Raja Rai Singh of Bikaner, poisoned the only well in the fort. With the source of drinking water gone, it had to be abandoned. Dharmeti and Gogunda were lost to Kanwar Man Singh, and Udaipur to Mahabat Khan.

Pratap was cornered in the south of Mewar. Unaccustomed to guerrilla warfare, the Mughal army was frustrated. And in the midst of adversity, Pratap held court with all the dignity reminiscent of Mewar in her days of glory. When the spies reported what they saw at the Mughal court, Khan-e-khana Abdur Rahim reportedly remarked:

All is unstable in this world. Land and wealth will disappear, but the virtue of a great name lives forever. Pratap abandoned wealth and land, but never bowed his head.

When Pratap despaired, the Rajputs at the Mughal court bolstered his courage. Prithviraj of Bikaner wrote to him:

The hopes of the Hindu rests on the "Hindu", yet the Rana forsakes them. But for Pratap, we would have all been reduced to the same level by Akbar. Our chiefs have lost their valour and our women their honour. Akbar has purchased us all from the flesh market, but the son of Uday proved far too expensive. Despair drove many of us to permit ourselves to be sold but from such infamy the descendant of Hamir alone has been saved. Our race will look to Pratap and his children to provide a pure breed of Rajputs with which we shall rebuild Rajasthan.

Akbar let Pratap live out his final days in peace. Maharana Amar Singh, who succeeded his father, fought 17 battles and was finally overcome by the forces of Prince Khurram (later Emperor Shah Jahan), fighting on behalf of Emperor Jahangir. Akbar had not realised his desire: the surrender of the Maharana or Mewar.

Khurram, with Rajput blood still strong in his veins, did not humiliate Amar Singh. He was allowed to live as the last independent king of Mewar.

It is the good soldier who wins the war. And a good soldier is never a dead soldier. The Mughals are long gone, so are the martial Rajputs. The course of history meandered its way into the inevitable outcome.

As to who won the battle of Haldighati, it is barely of any consequence.

#Akbar, #Battle of Haldighati, #Maharana Pratap
The views and opinions expressed in this article are those of the authors and do not necessarily reflect the official policy or position of DailyO.in or the India Today Group. The writers are solely responsible for any claims arising out of the contents of this article.