Whatever be the election results, Mamata’s politics will be limited to the electoral gains while BJP has a long-drawn ideological gameplan of aggressively absorbing the backward Hindus and Adivasis to a larger Hindutva frame.

In the 1980s, I used to hear my relatives initiating a conversation with any stranger by asking, “Are you edeshi or odeshi? We are edeshi Sadgop.” ‘Edeshi’ referred to natives of West Bengal, and ‘odeshi’ meant Bangladeshi refugees. Sadgop was the caste.

Over time, the ice-breaker questions had faded away. The rivalry of edeshi-odeshi remained as a dual of Ghoti and Bangal in Mohun Bagan-East Bengal football matches in Kolkata. The caste mostly remained in the matrimonial columns. The caste-based social relations and tensions did not come into the mainstream political realm.

During the Left rule, people in West Bengal were identified by their party affiliations: CPIM, Congress or TMC. Communal tension between Hindu para and Molla para was restricted to pockets and was sporadic. The moderates of the neighbourhood would soothe any such tension.

Scholars would attribute this political culture in West Bengal to the empowerment of the lower caste Hindus and Muslims through land reforms and the strengthening of Panchayati Raj institutions by the Left. The Left progressive Bengalis would take pride in staying away from caste-communal politics, which was seen as a North Indian construct.

But what started as wooing the Muslim and Matua vote bank by Trinamool Congress (TMC) Chief Mamata Banerjee in 2009 has now turned into a full-fledged battle to win over the religious communities and castes in Bengal in 2021. 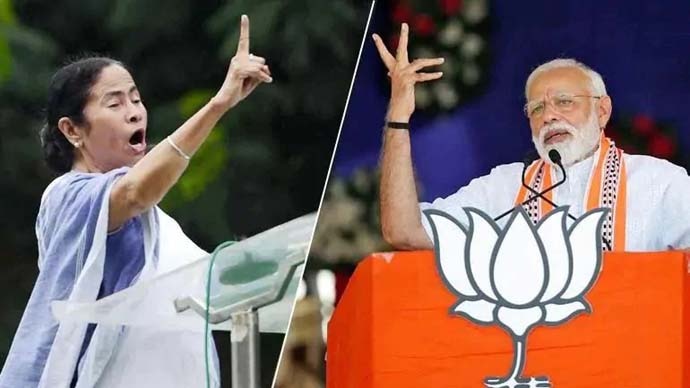 Mamata’s response to Hindutva and BJP’s aggression has been based on a weak ideological foundation. (Photo: Reuters / India Today)

TMC fielding more Scheduled Caste candidates than the number of reserved seats, targetting the Adivasi voters of North Bengal and Jungalmahal, efforts to woo the Rajbongshis of Cooch Behar, and both — BJP and TMC — promising reservations for backward Hindu castes like Mahishya, Tili, Tamul, Saha in their manifestos, reflect the political mood.

On top of that, there has been a competitive politics of religious polarisation, which emerged with the aggressive Ram Navami celebrations by the fringe Hindu organisations and the CAA-NRC debate. The fierce communal campaign in Nandigram (the seat where Mamata Banerjee is contesting from) is a testimony to the revival of pre-independence caste-communal politics in Bengal.

The Left too, could not escape the fire of identity politics as they have allied with Muslim cleric Abbas Siddiqui’s political outfit, the Indian Secular Front.

While announcing her candidate lists, West Bengal Chief Minister had told journalists, “Preparing the candidate list is very difficult. You have to take old and new; then there are different communities and castes and creed. This politics was never there in Bengal. But BJP has doing this divide-and-rule policy. So, we had to look into everything.”

Could Mamata avoid falling into the caste-community trap BJP has laid in front of her?

In pre-independent Bengal, the provincial government under the 1935 India Act was elected based on the religious demarcation of the constituencies. The Hindu-Muslim animosity reached such a head just before Partition, that Bengal witnessed the horrific communal riots known as the Great Calcutta Killing of 1946. Bengal was partitioned on a religious line in 1947. At that time, the caste politics through Bengal Provincial Scheduled Caste Federation and its leader Jogendranath Mondal had emerged as a political force. But it had a premature death after partition. So had the Hindu Mahasabha or Jan Sangh, due to the lack of leadership.

Congress’s agenda of nation-building immediately after Independence and the Left’s fight for social and economic justice had doused the caste-community fire in Bengal. The state did not have to witness caste politics the likes of which is prevalent in Uttar Pradesh or Bihar.

Since 2008, that pride began to collapse. After the Sachar Committee Report on the condition of the minorities indicated the poor condition of the Muslims in Bengal, the then opposition leader Mamata Banerjee tapped into the community. She had found a potential vote bank among the Muslims. Similarly, sensing the discontent, Mamata also nurtured the Matuas - the Namasudra Bangladeshi refugees settled mainly in the bordering districts of Bengal.

With the decline of the Left, which looked into the society through the prism of class and not caste, and the emergence of the saffron camp, which wants to appropriate the Adivasis and backward-caste Hindus into a bigger Hindutva force, Mamata Banerjee lost track in the battle.

It is true that TMC did poorly in Adivasi and Scheduled Class-dominated North Bengal, Jungalmahal and parts of the bordering district of Nadia in the 2019 Lok Sabha elections. It is also true that fringe RSS organisations like Vanavasi Kalyan Ashram or Bajrang Dal had mobilised the backward-caste population and even penetrated Matua Mahasangh. But the mobilisation was not enough to impact the 2019 Lok Sabha elections results.

Local corruption by the TMC leaders and workers, violence during the panchayat elections of 2018 — which prevented many voters from exercising their franchise — and weak organisation caused massive damage to Mamata’s vote bank in 2019. The debate over CAA-NRC had moved a lot of voters in districts bordering Bangladesh to the saffron camp. At the same time, the communal polarisation worked in favour of the BJP.

After the 2019 Lok Sabha debacle, Mamata Banerjee could not sustain the pressure of the BJP, which won 18 out of 42 Lok Sabha seats in Bengal. Poll strategist Prashant Kishore convinced her that it was prudent to address the communities separately. Hence began Mamata’s outreach and welfare schemes for the SC, ST, tribal and other communities by formulating separate development boards. Earlier, Darjeeling hills had seen such development boards for each ethnic-linguistic community, mainly to keep the Gorkhas tamed. Now, Mamata Banerjee wanted to woo almost every caste and community across the state.

In the process of shrugging off her pro-minority image, she also distanced herself from the clerics and other religious symbolism she used earlier and isolated a section of the minorities.

Mamata’s response to Hindutva and BJP’s aggression has been based on a weak ideological foundation. She could have emphasised more on her dole-development welfare politics, but she stepped into the Right Wing trap. TMC’s answer to Ram Navami has been Hanuman Jayanti. Allowance for Hindu priests was her reply to the criticism of allowance to the Muslim Imams and muezzins. Chandipath was her weapon to counter the allegations of minority-appeasement politics. She could channelise the social tension through her development-for-all pitch. She failed.

Whatever be the results of the Bengal elections, Mamata’s politics will be limited to the electoral gains while BJP has a long-drawn ideological gameplan of aggressively absorbing the backward Hindus and Adivasis into a larger Hindutva frame. Identitarian politics will engulf this Left-leaning state further.