Nobody says the M-word

Not long ago, Muslims and schemes for Muslims would be high points of election speeches of mainstream political parties. Not a word now. Not a word.

The greatest trick the Devil ever pulled was convincing the world he didn't exist.

Furfura Sharif is like Ajmer Sharif, famous for a pir and infamous for his heirs. Furfura heir Abbas Siddiqui has launched a political outfit: ISF. Indian Secular Front. Since Secular satraps are shy of openly advocating Muslim causes, openly Muslim outfits have stitched the secular tag to their partisan choga. If nobody will speak up for us, we have no option but to take the mic in our hands, that's the ruse, from Furfura. You got political compulsions, well we got no such compunction, is the message from overtly Muslim parties to secular parties who have started believing the BJP rhetoric that secularism is Muslim appeasement.

The Muslim vote in Bengal matters because of the sheer size and share. Mamata Banerjee weaned them away from the Communists, who could not openly profess their love for them because religion being opium and stuff. Mamata would make it a point to be seen at Muslim festivals, head covered neatly, eyes closed in prayer as if she were offering namaz. She didn't hide her love for the Muslim vote bank and Muslims did not hide their political affection for her. Once a sharp critic of Bangladeshi infiltration, she went on to become the chief protector of all things Muslim, Islam and Urdu and denier of illegal infiltration. 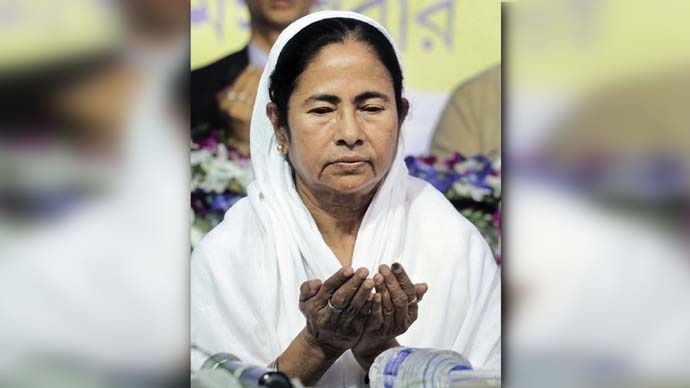 Mamata would make it a point to be seen at Muslim festivals, head covered neatly, as if she were offering namaz. (Photo: Getty Images)

Today, neither Mamata nor her party utter the M-Word. As the polling day nears, Banerjee is a Hindu girl who recites Chandipath before stepping out every day. The BJP made appealing to India's largest minority an act of appeasement. Now Muslims can't even get the customary election-time token announcements and lazy lip service lest the BJP cry appeasement. Top BJP leaders have repeated this rhetoric so many times that India's so-called secular parties cower in fear of being accused of appeasing a community, namely Muslim.

Nobody wants to be seen with them. Mamata's advisers have prevailed. She has announced a salary for temple priests to balance her earlier "salary for muezzins" of Bengal. She is seen visiting temples and maths.

Rahul Gandhi has been there, done that dhoti, tilak and janeu and all. The gotra tracing did not help. The pandit ancestry came to naught. Political pundits saw a change in hawa. Some termed it soft Hindutva, benign enough to not scare the minorities and strong enough to wean the Hindu hearts from the nouveau hriday samrats. The result was the same three leaves of the dhak or tesu. Rahul Gandhi has been there, done that dhoti, tilak and janeu and all. (File photo: PTI)

The cow-belt stalwarts openly making Muslims a part of their arithmetic like Lalu in Bihar and Mulayam in UP have faded. Their heirs have failed to recover the ground lost in the process. One of Lalu's sons dresses up like Hindu deities to win Hindu hearts. The other leads the party in the hope of reworking the magic of the Muslim-Yadav combo. Muslim support is suddenly a disadvantage.

So-called secular parties have begun maintaining distance from the Muslims, a minority numerous enough to tilt the balance in many seats. They could do that in a part of Bihar and pockets of Maharashtra. In Maharashtra, the All India Majlis-e-Ittihad-ul-Muslimeen (AIMIM) made its debut in both Assembly and Lok Sabha elections, tasting success outside Hyderabad for the first time. It exploited the growing chasm between Muslims and secular parties that no longer spoke about them.

AIMIM filled that space in the Muslim-dominated areas of Northeast Bihar in the last Assembly election.

Everybody wants some shade of saffron, this is the theory that AIMIM or ISF or AUDF of Badruddin Ajmal push to Muslims who feel disenfranchised because they are not used to be treated like just another voter in the election season. This was the only time in five years they were made to feel special, touched and hugged and shared meals with.

The BJP's appeasement rhetoric has put a full stop to that alignment. The fear of being seen in green has gripped the secular satraps who have saffron nightmares. This however benefits BJP. The openly Muslim parties taking Muslims into their fold makes the Muslim vote a Muslim property. The polarisation is complete when that happens. The polarisation benefits those on the two poles. The middle ground is soon a dreary desert. Ask Rahul Gandhi.

#AIMIM, #Rahul Gandhi, #Bengal elections 2021, #Muslim votes
The views and opinions expressed in this article are those of the authors and do not necessarily reflect the official policy or position of DailyO.in or the India Today Group. The writers are solely responsible for any claims arising out of the contents of this article.