In the high-octane electoral clash, social media is the sub-plot that both BJP and Trinamool Congress are banking on heavily.

On May 9, the BJP launched a social media campaign Bhoy Peyechhe Mamata (Mamata Banerjee is scared). The campaign followed about a week of the West Bengal Chief Minister giving a miss to media interactions. That would have gone unnoticed by the BJP had Banerjee not taken a jibe at Prime Minister Narendra Modi for never taking a question at any press conference since 2014.

No press conference in six years, versus a week of missing press conferences, is no comparison in real terms. Social media, however, offers both the real and that which can be made to look like real if you can get to trend it somehow - anyhow. 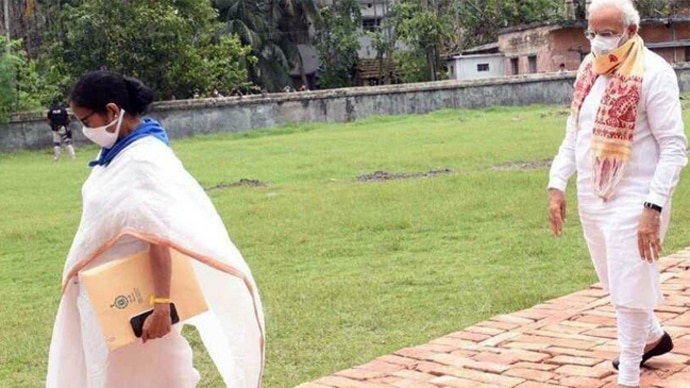 The battle for West Bengal is being waged both online and offline. (Photo: Twitter)

In West Bengal’s high-octane electoral clash, social media is the sub-plot that both parties – BJP and Trinamool Congress (TMC) – are banking on heavily. Not that there are just two players.

There’s the Left, buoyed by the success of its performance in the Bihar elections, and the Congress battling internecine social-media wars, spilling over to TV interviews and bites.

The BJP is known to have an edge, which beats others by miles, when it comes to social media. In West Bengal, however, it was Didi’s TMC that took the first lead. As the BJP rose from two seats in the 2014 Lok Sabha election to 18 in 2019 cutting down TMC from 34 to 18 in West Bengal, Banerjee dialled Prashant Kishor. Kishor came on board packed with I-PAC (India Political Action Committee).

Not only is Kishor the man behind Didi Ke Bolo (tell Didi about your problems) and Banglar Gorbo Mamata (Mamata is Bengal’s pride), but team I-PAC is believed to be actually running social media accounts of many TMC MLAs allegedly even without their knowledge.

A fact more widely known than that Banerjee sends Bengal’s misthi to PM Modi when all the public fighting is done, is that her nephew Abhishek Banerjee runs the show for the party along with Kishor. Many meetings of the party happen without party members other than Banerjee, Banerjee’s nephew and Prashant Kishor, who is working for the party but is not a party member.

A Sunday Guardian story says that I-PAC opened accounts in the names of TMC MLAs, got them verified and then began tweeting and posting from those accounts without the knowledge of the MLAs. Some MLAs reportedly got to know about tweets and posts in their name from their supporters. Many TMC legislators are old-style politicians who haven’t realised the potential of social media. Abhishek could have thought why waste time explaining when you can use the time tweeting and trending.

For TMC leaders who use social media, the instructions are to stay active and publicise the work done and that is being done.

To undo the TMC’s social-media blitz, the BJP decided to send in its best to the war front. BJP IT Cell chief Amit Malviya as co-in-charge of West Bengal along with Kailash Vijavargiya as the in-charge is actually just showing the importance BJP accords to the social-media war. Malviya has since been referring to Mamata Banerjee in his tweets as Pishi (aunt) for some ‘respectful’ badgering. Amit Malviya in Bengal after being appointed the state co-in-charge. (Photo: PTI)

But it is not like BJP has just woken up. When it comes to elections, BJP never sleeps. Ujjwal Pareek, convener of Bengal BJP’s social media cell, is said to track over 50,000 WhatsApp groups along with Twitter, Facebook and Instagram. Pareek’s team was behind the video of Mamata Banerjee losing her cool - which she never quite found - at people chanting ‘Jai Shri Ram’. It is said the video cost the TMC dear in the 2019 elections, projecting Banerjee as an anti-Hindu leader.

Unlike other states, where the BJP has been able to make inroads, in Bengal, the reach of Rashtriya Swayamsevak Sangh (RSS) is irregular and limited to border districts. The organisation doesn’t have the kind of social influence it enjoys in other states. BJP’s social media push in Bengal has to wedge that gap too. It has thus been using social media to rake up issues like atrocities on Hindus and appeasement politics of Banerjee.

In TMC, Prashant Kishor is identifying topics that will resonate with the people. In the most recent campaign after Banglar Gorbo Mamata and Didi Ke Bolo, TMC launched ‘Mark Yourself Safe From BJP’. The campaign crossed the 10-lakh mark in no time. But the bigger success of the campaign lies in the details. The campaign saw maximum participation from those in the age group of 18-35 years.

The problem for TMC lies in the fact that while there may not be resistance to the use of social media, there is resistance to the two men behind the game. Many leaders bowing out of the party and those rumoured to be on the way out, have said it as clearly as it can be said. They are not happy with Abhishek and Kishor. The resistance to Kishor could actually be the resentment towards the man he reports to.

For a cadre-based party, the paradropping of Abhishek as the Heir Apparent is being seen as a step towards making TMC a family enterprise just like many other regional parties in India.

While this may have a bearing on who joins and who leaves the party, it is unlikely to impact the social media strategy for TMC because Abhishek’s Pishi is in full control of the party she founded.

Amit Malviya too is in complete control of BJP’s social-media campaign. As voting day closes in, expect more fireworks on social-media platforms and more blood on the streets.

Active social media users are still actively using social media when people begin to queue outside polling booths. Their impact on electoral outcomes is often indirect by way of setting narratives. At the end of the day what matters is the outcome. In a high-stakes battle like the one underway in Bengal, everything that influences the outcome – directly or indirectly - counts.

Also Read: How Bengal 2021 will be the ultimate political battle of Mamata versus Modi

#Prashant Kishor, #Abhishek Banerjee, #Amit Malviya, #Bengalelections
The views and opinions expressed in this article are those of the authors and do not necessarily reflect the official policy or position of DailyO.in or the India Today Group. The writers are solely responsible for any claims arising out of the contents of this article.