Bihar shelter home case: How everybody compromised the 'system'

The narrow lane in Muzaffarpur Kalyaani locality called Sahu Gali ends almost abruptly at Brajesh Thakur’s four-storied house. One can’t go beyond his house on the lane, and so it was akin to a jail for the girls in the shelter home.

The iron gate leading to the compound is locked. A board announces it as the office of Pratah Kamal, the newspaper Thakur owns. A few feet to the right, a small part of the wall announces this was a shelter for girls in need of protection, with the Bihar government’s official emblem on top.

The painted signboard has Bihar Sarkar written on top and Sewa Sankalp, the organisation that ran it, at the bottom. The third floor, where the girls who were beaten, drugged and raped were kept, has two sections. The first had 40 beds while the second had 10 beds. A flight of stairs leads to the ‘torture room’ on the fourth floor.

The Balika Grih run by Thakur, which is at the heart of the shelter home sexual abuse horror, was paid Rs 40 lakh a year by the social welfare department. Thakur is the prime accused in the case, in which at least 34 minor girls were raped and tortured. 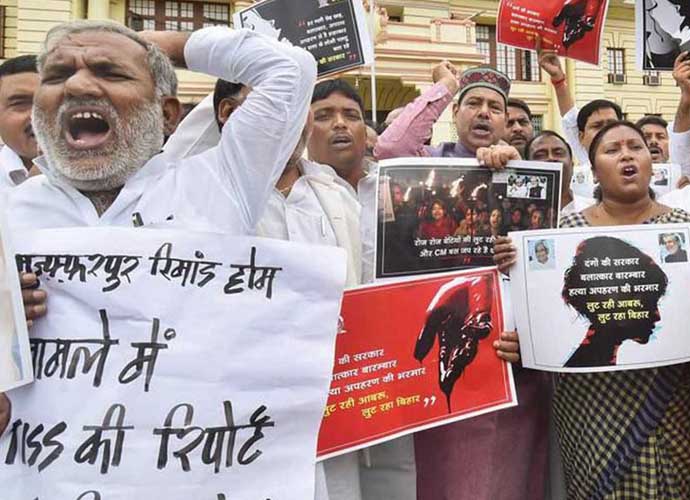 Most of the victims are orphans and homeless, which made them both vulnerable and unfortunate. They had no families to turn to. Ideally, the state should have taken over their guardianship. In this case, however, the state government outsourced the job to an NGO with questionable credentials. Their rape and sexual abuse continued for months as those assigned to monitor the shelter homes looked the other way.

Last week, chief minister Nitish Kumar also agreed that it was a system failure that caused sexual abuse in the shelter homes. Indeed, the system of surveillance and checks was compromised for successive months at every level.

The rules stipulate that every shelter home must be examined and approved by a district screening committee before it can be allowed to house girls. But, the rules were turned upside down in the case of Thakur’s Seva Sankalp Evam Vikas Samiti that ran the state government-funded shelter. Here, the State Commission for Protection of Child Rights and District Magistrate, Muzaffarpur, had written to State Welfare Department to shift the shelter. The officials in the social welfare department opted to ignore it.

Even the chairman of the child protection commission, Harpal Kaur, who visited the Bal Grih and submitted a report saying the girls were “sad” failed to pick the telltale signs of sexual abuse.

In the case of Muzaffarpur short stay home, Dilip Verma and Vikash Kumar, chairman and member of the district child welfare committee have also been found to be involved in the sexual exploitation of girls. With the CBI taking over the investigations, there’s hope for all culprits to be exposed.