Will 2020 be the sixth-year bogey for Narendra Modi and the BJP?

Can Modi government weather the storm set off by the protests against the Citizenship (Amendment) Act and National Register of Citizens (NRC)?

In India, six years has proved to be the tipping point for the last three governments between 1998 and 2019. The Atal Bihari Vajpayee-led government lasted six years through two iterations from 1998 to 2004.

The Manmohan Singh government was hit in its sixth year by a torrent of scandals — the Radia tapes, Commonwealth Games, 2G and Coalgate. The scams sparked the Anna Hazare anti-corruption movement in 2011, destroying the government’s credibility and leading to its rout in the 2014 Lok Sabha election.

The Modi government now faces its own version of the sixth year bogey. Its honeymoon period after the 2019 LS victory is over. Can it weather the storm set off by the protests against the Citizenship (Amendment) Act? While PM Narendra Modi’s nationwide popularity remains strong, that is no longer the case in state Assembly elections where regional issues — and strong regional leaders — hold sway. But that trend is fungible. How the states vote today, the nation could vote tomorrow, endangering the BJP’s lock on the national vote share of just below 40 per cent.

The BJP’s brains trust comprises two men: Modi and Union home minister Amit Shah. Among the shrewdest political tacticians in decades, they know that India has already cleaved into two halves. The first are followers of Hindutva to whom secularism is a fraudulent concept invented by Nehruvians to appease minorities and build a permanent vote bank.  The other half comprises minorities, regionals and a slice of Left-leaning secular Hindus who abhor Hindutva. The contest between these two halves will decide the future of Indian politics for at least the next decade. 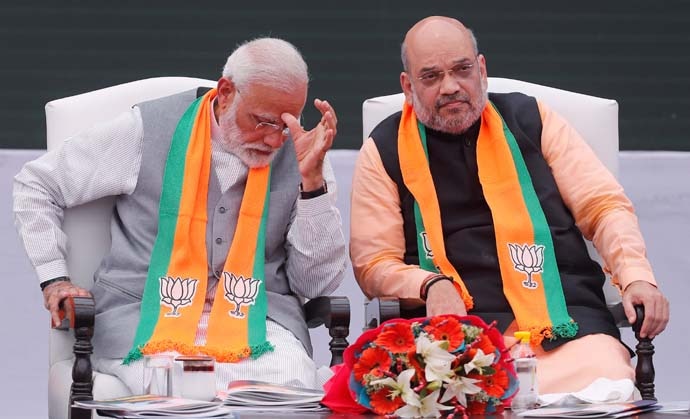 Modi and Shah are betting that they will add momentum to the BJP’s vote-gathering machinery — NRC or no NRC. But they also know that the sixth year bogey lurks ominously in the background. (Photo: Reuters)

Protests against the CAA and National Register of Citizens (NRC) are a symptom of the cleavage between the two halves. Both know that a combination of CAA and a nationwide NRC could tip the electoral arithmetic irreversibly in favour of the BJP by disenfranchising illegal Muslim migrants and re-enfranchising illegal Hindu migrants. Neither group, mostly from Bangladesh, has valid documents. The three-page official gazette notification of the CAA is seemingly harmless.

Who could object to persecuted minorities from Pakistan, Bangladesh and Afghanistan being given fast-track citizenship in India? Even the exclusion of persecuted Muslims from the six communities granted citizenship rights can be explained: Ahmadiyyas and Shias, for example, are not, strictly speaking, religious minorities but intra-religion sects (though Pakistan does not, by law, regard Ahmadiyyas as Muslims). Besides, India can’t be a refugee haven for all persecuted people in the neighbourhood — whether Tamilian Hindus in Sri Lanka or Rohingya Muslims in Myanmar.

The real intent behind the CAA becomes evident when the government concedes that only around 31,000 refugees currently in India would benefit from the CAA. So, why not just give them special citizenship status without amending the 1952 Citizenship Act? The answer lies in the NRC. Of the 19 lakh people excluded from the now-defunct Assam NRC, nearly 5 lakh were Hindus. The CAA has been part of the BJP manifesto in 2014 and 2019. Why did the BJP keep it on the backburner for over five years after taking office in May 2014? The answer again: The Assam NRC. With 5 lakh Hindus and 14 lakh Muslims excluded in the long-drawn-out, Supreme Court-supervised Assam NRC in 2019, the BJP used adversity to seize the opportunity.

The CAA was the fuse, NRC the detonator. Once a nationwide NRC is conducted (notwithstanding the BJP’s denial), stateless Hindus will be fast-tracked into citizenship under the CAA. Excluded Muslims will not qualify for citizenship as per the CAA’s exclusion clause. The result: A significant electoral advantage to the BJP. But isn’t a nationwide NRC dead on arrival? 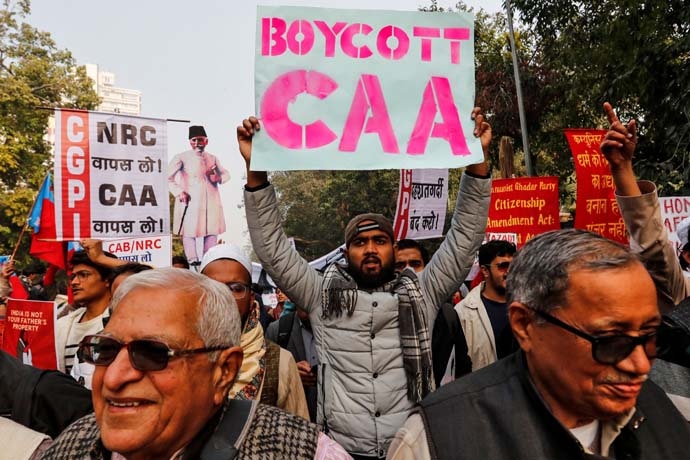 The CAA was the fuse, NRC the detonator. (Photo: Reuters)

Contradictory statements by the BJP’s ministers leave open a window for the NRC through the innocuous National Population Register (NPR) on which work is scheduled to begin in April 2020. If the defunct Assam NRC took years of Supreme Court-monitored work to produce a flawed citizens’ registry in one state, a nationwide NRC is for all practical purposes ruled out. The Opposition of the BJP’s key NDA allies to the NRC will make it impossible to win approval for it in the Rajya Sabha. Modi and Shah of course always knew that a nationwide NRC was a means to other ends. It was to be used in the runup to the 2024 Lok Sabha poll as an electoral Trishul: A promise that would electrify the party’s Hindutva base.

The violence set off by the CAA across campuses and fronted by several minority groups has consolidated the party’s silent Hindu majority. There is no telling how this invisible voter base, including erstwhile moderate Hindus — angered by the communally-tinged violence — will react. Modi and Shah are betting they will add momentum to the BJP’s already formidable vote-gathering machinery — NRC or no NRC. But they also know that the sixth year bogey that laid low the Vajpayee government and triggered the unravelling of Manmohan Singh’s UPA 2 lurks ominously in the background.

Also read: With CAA, BJP has voted itself out of power in Assam in 2021

Post your comment
#Amitshah, #Narendra Modi, #Caa-nrc, #BJP
The views and opinions expressed in this article are those of the authors and do not necessarily reflect the official policy or position of DailyO.in or the India Today Group. The writers are solely responsible for any claims arising out of the contents of this article.