Is the BJP really a party with a difference?

In 1996, soon after LK Advani resigned as a member of Parliament over his name surfacing in the “hawala” diaries, we asked the original BJP ideological mascot why he had taken what many believed was an “extreme” step.

“It is a conscience call. I come from a party with a difference which is committed to probity in public life,” he claimed. The notion of the BJP being a “party with a difference” stuck: that very year when Atal Behari Vajpayee’s government fell in 13 days, a section of the BJP took pride in the moment being a reflection of their uniqueness as a party that wasn’t power-hungry, in sharp contrast to the ancient regime of the Congress. It was a conscience call for LK Advani in 1996.

Now, the wheelings and dealings in Karnataka in 2018 have ensured that the mask has finally fallen: the moral high ground has slipped under the quicksand of individual ambitions and the arrogance of electoral invincibility.

The BJP’s distinctiveness was based on the twin pillars of ideology and idealism: while the basic ideology of Hindu nationalism was its USP in a cluttered political marketplace, there was a moral absolutism which the party claimed to derive from the puritanical world-view of the RSS.

The quintessential RSS pracharak was seen to be someone who was not just wedded to the idea of a Hindu Rashtra, but also to value-based politics premised on austerity, self-discipline and integrity. The ethics were supposedly inculcated in the military-like training offered in the early morning shakhas, a “moral” education that was seen to be in stark variance with the Congress’s departure from Gandhian values. The Advani-Vajpayee duo were products of the rigorous “shakha” culture, so are Narendra Modi and Amit Shah. Vajpayee and Advani were reared in the Congress era, when the Jawaharlal-Indira duopoly had ruled India imperiously for almost forty years after Independence. The BJP (or the Jan Sangh as it was known then) was a marginal political entity, labelled as an upper caste Brahmin-Bania party with a “Hindi-Hindu-Hindustan” ideological framework that limited its growth.

The Ram Janmabhoomi movement and the demolition of the Babri Masjid in 1992 was the first landmark moment in the evolution of the Sangh Parivar from being a peripheral group to one that was at the centre of the Indian politics. The Congress’s politics of “minority appeasement” through the 1980s opened a window of opportunity, one that the BJP determinedly seized to craft an aggressive Hindu mobilisation.

And yet, as Advani’s resignation over the hawala diaries showed, this was still a party where a measure of political idealism co-existed with ideological rigidity. The majoritarian ideology gave the BJP its core supporter who wanted to see India as a Hindu Rashtra; the “virtuous” nature of its leadership slowly brought in the crucial “plus” vote of those Indians who were tiring of the Congress’s dubious tryst with corruption and dynasty. It is that incremental vote which propelled Vajpayee to become the country’s first non-Congress prime minister to serve a five-year term and even more crucially enabled Mr Modi to lead a BJP majority government in 2014. 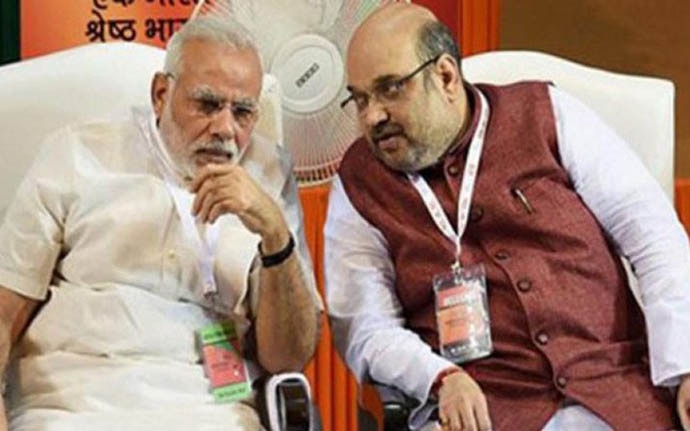 But, where the Vajpayee-Advani era claimed to revolve around a relatively benign and inclusive notion of a political “raj-dharma” or good governance as “duty”, the Modi-Shah period has seen an unapologetic adherence to “Chanakya-neeti”, an aphorism that reveals an obsessive urge only with the ends, irrespective of the means used to acquire the power at all costs.

Where a Vajpayee, for example, would readily cede space to his coalition partners, a Modi is clear that this is a “BJP-first” government in which the allies are mere appendages. Where an Advani would take refuge in the party’s ideological isolation in the mid-1990s, a Shah is determined to expand the BJP’s footprint from Kashmir to Kerala with an unmistakable ruthlessness, treating political opponents as “enemies” not adversaries.

The Sangh Parivar foot-soldiers still dutifully carry out their door-to-door campaign, but now they are backed by exhaustive data crunching, strategic vision, organisational rigour, a fat election war-chest and, above all else, a charismatic communicator as their helmsman. In the process, the BJP has been transformed from being just another opposition party, aspiring for power, into the most dominant and formidable election machine of post-Independence in India.

As a consequence, while its primary commitment to the Hindutva ideology is seemingly intact – despite compromises made while stitching up “unholy” alliances like with the PDP in Jammu and Kashmir – the BJP’s idealism is now negotiable on the high table of power. This is exactly what has happened in Karnataka (and earlier in Goa and Manipur): the push for a “Congress-mukt” Bharat has led the BJP to imitate the very Congress practices it once so abhorred.

A frequent explanation the BJP has provided in the last week to justify its drive to capture power in Karnataka is to point to the Congress’s appalling track record in misusing the Raj Bhavans and subverting democratic institutions: after all, long before Vajubhai Vala, there have been the likes of Ram Lal and many other governors who acted as political agents of the ruling Congress elite. 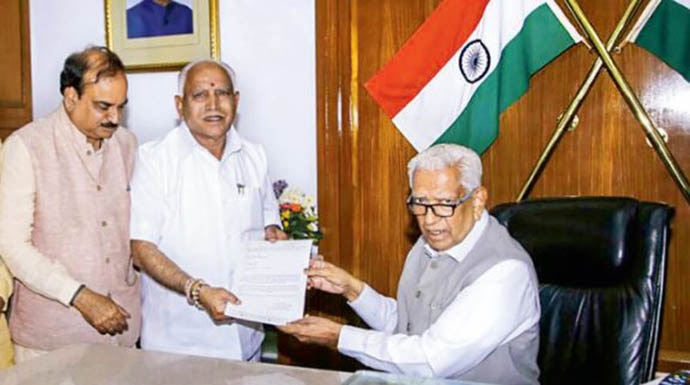 Long before Vajubhai Vala, there have been the likes of Ram Lal and many other governors who acted as political agents of the ruling Congress elite.

But that the Congress is guilty of undermining constitutional authorities in the past cannot be a reason to indulge in similar behaviour in the present, or future.

Yes, the Congress in Karnataka was just as desperate to capture power and halt the Modi-Shah juggernaut in the deccan plateau but does that warrant a matching response premised on money and muscle? Surely, any attempt to draw a moral and political equivalence with the Congress’s historical failings leaves the BJP open to the charge that it is no longer a party with a difference.

In 2014, Mr Modi was cheered when he stood up on the ramparts of the Red Fort and promised the nation, “na khaoonga, na khane doonga”; in 2018, after an acrimonious Karnataka campaign, which saw the likes of the controversial Reddy brothers take the centrestage, and a post-election “super-over” that has seen frantic attempts to cobble together a majority, by inducing MLAs to switch sides, the moral halo has been lifted. Mr Modi is still India’s neta number one, but his credibility as a crusader against corruption, who will transform the country’s venal political culture, has been scarred.

Post-script: In the aftermath of Karnataka’s 58-hour BJP chief minister BS Yeddyurappa’s resignation, there have been attempts to liken his “sacrifice” to that of Mr Vajpayee in 1996. The truth is that where Vajpayee resigned as a first resort, for Yeddyurappa it was the last resort, after all efforts to get the Congress-JD (S) MLAs to leave their luxurious resorts failed! As a viral WhatsApp joke goes: "In the good old days, it was said, ‘politics is the last resort of the scoundrel; now, resort is the last politics of scoundrels!”

#Congress, #Karnataka election, #Narendra Modi, #BJP
The views and opinions expressed in this article are those of the authors and do not necessarily reflect the official policy or position of DailyO.in or the India Today Group. The writers are solely responsible for any claims arising out of the contents of this article.