One year since Modi 2.0, BJP looks at years ahead

The party met its promises on Article 370, Ram Temple, Triple Talaq among others. It is set to tackle the challenges thrown by the coronavirus.

May 30 marks one year in office for the Modi 2.0 government. Anniversaries are time for stock-taking. A time when governments not only asses their performance, but also show their report cards to the public. The past one year has been a busy year for the BJP in terms of meeting the promises made in its manifesto when the party went to public, seeking to be voted back to power.

The biggest achievement of the party in this one year has been reaffirming people’s faith in manifestos. Each time the BJP introduced bold and unprecedented reforms, analysts ticked off tasks as completed from the manifesto the party presented to the public in April 2019. The party outlawed Triple Talaq, did away with the special status accorded to Jammu & Kashmir under Article 370, passed the Citizenship Amendment Act, ensured the peaceful starting of the construction of Ram Temple, merged banks as a step towards economic reforms and providing banks with relief from NPAs.

The government broadened the welfare net by strengthening systems to take benefits of welfare schemes directly to the people. The Modi 2.0 government has completed one year in office. (Photo: Reuters)

Just two months before the government was to complete its first year in office, India found itself grappling with a crisis that took the entire world into its fold - the coronavirus pandemic. The government’s response to the virus outbreak has been two-fold. The recovery rate from Covid-19 is 41.61 per cent. In March, it was 7.1 per cent. In just two months, the government ensured capacity enhancement, which has now brought India to the point where its fatality rate from the disease, at 2.87 per cent, is among the lowest in the world.

The Modi government, however, is not one to rest over its laurels. The pandemic has presented new challenges. and the government is ready to take them head-on.

To address the challenges in a post-Covid-19 world, effective coordination is required among the Centre, states and local governments. The Modi government is a strong proponent of cooperative federalism. The Centre-State relationship needs to be redefined to transform each of the 28 states as self-sustaining economic entities in matters of energy, water, food production, waste-recycling, production, transport and communication, supply chains and rule of law, among other things. The initiative would help eradicate the historical imbalance in growth across states that became more prevalent in post-Independence India.

States will have to be empowered by way of a proper and somewhat uniform allocation of funds from the Centre. This would enable each state to build capacities that can promote sustainable economic recovery.

This uniform growth across the states will have a cumulative effect on the macro-national economy, with a positive influence on the migrant workers, the poorest of the poor, and the MSME units, in terms of generating more employment and increasing incomes.

In a post-Corona world, universal social welfare must be extended to all. Governance structures must be re-organised to make India a welfare state. To that end, schemes like direct cash transfers, transfers in kind, etc., must be enforced, so that the poorest of the poor are never denied access to essentials like food. They must also always have access to liquidity. This will help insulate the most marginalised like those working in MSMEs, SCs, STs, women, the old and infirm and Divyang, from sudden disruptions like the one we saw over the past two months. The plan will pave the way for an ‘Aatmanirbhar Bharat’ of PM Modi’s vision. 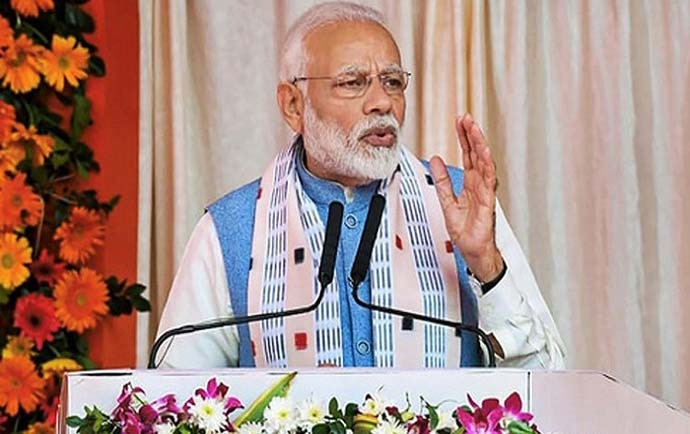 Prime Minister Narendra Modi has envisioned an 'Aatmanirbhar Bharat'. The government is working towards it. (Photo: PTI)

The welfare agenda will in turn lead to a change in the political structure as pro-poor policies will create a strong link between the government and its citizens.

The pandemic has proven issues such as better public and healthcare services are not marginal but central. Politics thus has to change. Elections in India would be fought on the parameters of education and health or social safety, rather than regional or parochial identity markers.

The government structure would have to be decentralised via devolution of powers to the village councils for effective micromanagement of primary health centres.

The doctor-to-patient ratio in India stands at 1:1,445. The country will have to move towards achieving the ratio of 1:1,000 set by WHO. A cross disciplinary expert group needs to be formed to put in place a comprehensive health policy that will address the twin issues of economic growth and demographic dividend.

The pandemic also presents an opportunity before India to reimagine its role in the global order. In the post-Covid-19 world, the competition and confrontation between US and China would continue and reduce their global authority. New Delhi must look at maintaining trade relations with all in the best interest of India. India’s geopolitical stance, however, will depend on the success of its domestic reforms, which would otherwise force it to ally with a major power on less favourable terms.

But the pandemic has taught India that the time for total self-reliance is now.

The government is thus pushing its “Make in India” initiative with full vigour. The BJP government is working with states to provide land with power, water and road access that would help attract new investments from overseas, who maybe looking for options to set up manufacturing units.

Introduction of investor-friendly land and labour laws, cutting red tape, emergence of a single-window clearance system, etc., are some of the measures being undertaken by the government to win foreign investors' confidence.

The government has started efforts to ensure we don’t miss the bus.

The pandemic has presented India with an unprecedented policy challenge, with a severe impact on its economy in the backdrop of an ongoing climate crisis. The government is rolling out low-carbon development strategies and policies to mitigate the economic damages caused by climate change in a post-Covid-19 world.

The last one year has been momentous for the BJP government. But the coming years are going to be more eventful from the governance perspective. The BJP is ready to turn the tragedy that has befallen the world, into an opportunity for India’s economic and social rise.

#WHO, #Cooperative federalism, #Coronavirus, #One year of modi 2.0
The views and opinions expressed in this article are those of the authors and do not necessarily reflect the official policy or position of DailyO.in or the India Today Group. The writers are solely responsible for any claims arising out of the contents of this article.