Boris Johnson is all set to become the new Prime Minister of the UK. His racist, sexist and hate-filled rhetoric has only been fuelled by a media delighted by anything that sells.

Columnists on newspapers do not have to take responsibility for their rhetoric — but politicians do. That distinction has always been lost on Boris Johnson and once you understand that about him, you understand all.

Three years ago, he notoriously promised the voters that there would be an additional £350 million a week for the National Health Service if the country left the European Union, which was the lie that almost certainly tipped the delicate balance in favour of Brexit and propelled him on the road to 10 Downing Street.

Leaving the EU had previously been a pipe dream that had begun to form in Johnson’s head over many years of ridiculing what he saw as its oppressive rules and regulations in his columns for the elderly readers of the Daily Telegraph newspaper. The facts seldom got in the way of his stories, but they played into a notion of British exceptionalism that a generation that had never fought in the Second World War — but had watched a great many old black and white films about it — were only too happy to buy into. No. He's much smarter than that. (Photo: Reuters)

Johnson understood from his earliest days in journalism that you don’t get to raise your profile — you certainly don’t get to be invited on television — by taking a rational and nuanced view of the big issues of the day. He understood, too, that racism has seldom, if ever, been far from the surface in the British psyche, nor disdain for other minorities.

Shamefully, he wrote of black people as “piccaninnies” with “watermelon smiles” and said Muslim women who wore burkhas looked like “letter boxes”. As for homosexuals, they were “tank-topped bum boys” and attractive women he saw as no more than “hot totty”.  On a visit to Myanmar during his short and inglorious spell as foreign secretary, he had to be prevailed upon to stop reciting The Road to Mandalay, a colonial-era Rudyard Kipling poem that included the line: “The temple bells they say/Come you back you English soldier”.

The last British politician to play the race card quite so openly was Enoch Powell, whose notorious 'Rivers of Blood' speech horrified right-thinking members of society in the 60s. A sense of responsibility and good taste meant that most major news organisations were seldom, if ever, willing to supply Powell with the oxygen of publicity after that outburst.

Rupert Murdoch’s subsequent dominance of the British media landscape brought with it a new set of rules — and, alas, racism became in journalistic terms, a highly marketable commodity.

Even though Murdoch’s The Times newspaper had to sack Johnson for lying, the right-wing tycoon is now an avid supporter of his and they have, almost inevitably, a mutual friend in the populist-in-chief Donald Trump. Like Trump, Johnson’s personal conduct has often been a source of dismay. Even during the leadership campaign, police had to be called to the flat that Johnson — recently divorced — shared with his girlfriend, Carrie Symonds, a former Tory party aide. She had reportedly been heard shouting at him — “get off me” and “get out of my flat” and even more revealingly, after he had apparently spilt red wine over her sofa: “You just don't care for anything because you're spoilt. You have no care for money or anything”.

However, Johnson’s all-time low in the campaign probably came in a leadership debate when he was given the chance to defend the British ambassador to Washington, Sir Kim Darroch, who had evoked the displeasure of Donald Trump after private communiques he had written were leaked to a newspaper.

Boris Johnson chose not to, which gave an unsettling foretaste of the craven relationship that Britain would soon be having with the Trump administration. 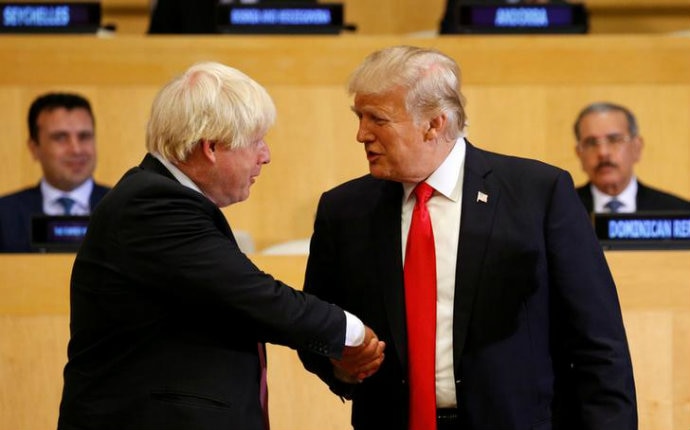 Senior figures in the European Union — whose newspapers are, by and large, more restrained than ours — have been horrified by the jingoism and the rage that they have seen the British media whipping up and now, they know that they will have to face in Johnson, the man who has orchestrated and personified all of the hatred the most.

Politicians once endeavoured to represent the people at their very best. In Johnson, we now see a Prime Minister who has all too often represented my fellow citizens at their very worst. I can only hope that my many friends in India will not judge us all by his standards and recognise that his administration — while profoundly damaging to us all — will quite possibly be the shortest in living memory.

Tim Walker is a London-based author, broadcaster, media strategist and award-winning journalist whose newspaper career says a lot about his personal political journey: the Daily Mail, the Daily Telegraph, the Daily Mirror and now The New European.