Total boycott of Chinese goods is impractical, but posturing is not a bad idea

Visuals of people throwing 'Made in China' TV sets from their balconies and nationalist groups protesting with anti-China banners are useful ‘conflict-time’ optics that the Chinese state-owned media did not miss.

The demand for boycotting Chinese Goods reminded me of an incident many years ago. We were on a trip to McLeod Ganj, Dharamshala. High on my wife’s agenda – perhaps even more than getting a glimpse of HH The Dalai Lama – was to buy Tibetan soup bowls. But, when we arrived, much to her surprise, all the shops had placards put up outside reading “Boycott Chinese Goods”. Visibly crestfallen, she asked one of the shopkeepers where else can we get them. The nonchalant Tibetan shop-owner told her matter-of-factly in Hindi, “Aur kahan milega pata nahin, lekin humara supply toh Dilli ka Sadar Bazaar se aata hai. (I don't know where else you might be able to get it, but our supply comes from Sadar Bazaar in Delhi)” What we discovered in Sadar Bazaar after our return to Delhi is another story. The cheap stuff we see in restaurants are all made in Uttar Pradesh.

Cut to the 2019 Lok Sabha election campaigns. Narendra Modi did not miss an opportunity to mock one of his prime adversaries saying that the leader did not know India is the world’s second-largest manufacturer of mobile phones. What was left unsaid, however, was how many of these instruments were merely assembled in India with imported components and what percentage of the phones were high-end models of top brands.

Coming close on the heels of “Aatmanirbhar Bharat” call (that was quickly translated into Videshi vs Swadeshi) – “Boycott Chinese Goods” appeared to be a natural extension of the same theme. Visuals of people throwing “Made in China” TV sets from their balconies in a fit of rage and nationalist groups protesting with anti-China banners were useful ‘conflict-time’ optics that the Chinese state-owned media did not miss.

Those who understand trade and commerce economics, as well as the realities of manufacturing and supply chain, know this is easier said than done. However, it has set the tone for a conversation to start within the country. There is absolutely no doubt that India needs to up its game in manufacturing. So far, results of campaigns like “Make in India”, despite the state-sponsored hype surrounding it, has been underwhelming. But, these changes never happen incrementally. History shows that every country that has successfully shifted gears needed a tipping point. Covid-19 and the border standoff with China can provide that impetus for India.

The Narendra Modi government had already embarked on a mission to attract global corporations out of China into India. Now, it is no longer just an opportunity but also a strategic imperative. India cannot hope to change the balance of power without reducing its economic equation with China. The Chinese state machinery probably understands this better than Indians. That probably explains the disproportionate reaction of the Global Times to stray protests against Chinese goods in India.

While popular perception associates Chinese imports with mobile phones, electronic goods and cheap plastic goods, in reality, the bulk of imports from China comprises of electrical equipment, machinery and mechanical parts. Organic chemicals is another big-ticket item. Commodities like steel and aluminium also constitute a significant part of the import basket. Whereas, the much talked about pharmaceutical imports is less than one per cent and plastic goods are around five per cent of the import bill. 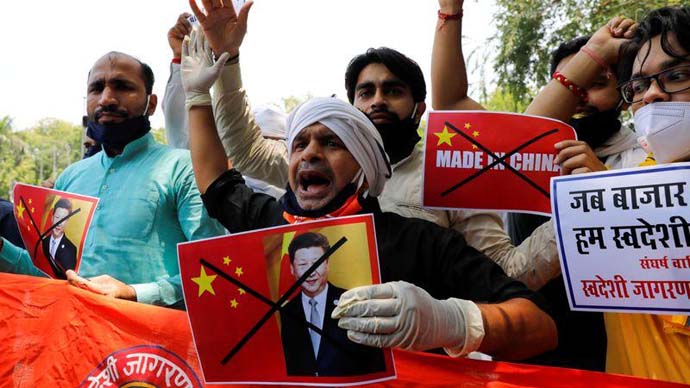 Visuals of nationalist groups protesting with anti-China banners are useful ‘conflict-time’ optics that the Chinese state-owned media did not miss. (Photo: Reuters)

Surely, the mandarins in Niti Aayog understand that such heavy-duty imports cannot be replaced overnight by developing indigenous capabilities or finding alternate international sources. What can definitely be curbed in the short run are non-essential imports. However, that will be a small change in the larger scheme of things. Making India the new global investment destination would require a systematic approach with a clear time-bound road-map.

The government appears to have identified three areas for intervention for attracting new investment – land, labour, and ease of doing business. But, none of these is going to be easy in our political system. It would be a tough act to follow China, with its totalitarian command structure that brooks no dissent, or even other Asian countries like Vietnam where people see investment in local manufacturing as the path to progress.

Of the three factors mentioned above, bureaucratic hurdle should be the easiest to overcome. But, as we have seen repeatedly in Narendra Modi’s six years, it has turned out to be the Achilles heel of reforms. For a radical change, a groundswell of public opinion is often the trigger. That is where the nationalist sentiments may play the role of a catalyst.

In the post-Covid world, one must also apply a reality check on the prospects of investments in megaprojects. In any case, larger projects take longer to implement and come with greater complexities, like with regard to land acquisition. They also have a lower investment to direct employment ratio. Unless the global economy picks up fast, the demand can also be an issue in many sectors.

The low hanging fruits, as it were, would be in midsize investment with high local value-addition that can be turned around at a fast clip. However, what we need are a few quick wins that will change the mood for investments. The Prime Minister is a past master at this, having perfected the art during his tenure in Gujarat.

Signals can go out even in the form of change in import tariff structure and revisiting the criteria of participation of Chinese firms especially in state-funded infrastructure and engineering contracts. Steps can be taken, as already initiated, to prevent predatory or creeping acquisitions of Indian businesses by Chinese investors taking advantage of lower valuations in a Covid-19-affected stock market.

Meanwhile, it does lighten the atmosphere a bit to see the Chinese media fret at some “time-pass” (to use a Mumbai lingo) protests. That can be the Indian answer to the much-vaunted Chinese psychological warfare.

Also Read: How India can hit China where it hurts them most

Post your comment
#Supply-chain, #India-china trade relations, #Boycott china, #Indiachinafaceoff
The views and opinions expressed in this article are those of the authors and do not necessarily reflect the official policy or position of DailyO.in or the India Today Group. The writers are solely responsible for any claims arising out of the contents of this article.