As The Belt Tightens: China’s Belt and Road Initiative (BRI) is only generating resentment in Pakistan. Particularly among the volatile Baloch

Even as Imran Khan visits China, the Chinese are concerned about their workers in Pakistan. They face pressure from the people of Balochistan, enraged at the misuse of their resources and the abuse of their human rights.

Prime Minister Imran Khan of Pakistan will travel to Beijing this week to attend the international conference hosted by President Xi Jinping on China’s Belt and Road Initiative (BRI) that is designed to extend China’s strategic outreach well beyond its land and sea frontiers.

However, there is no consensus in Pakistan on its participation in the project.

The China-Pakistan relationship has been labelled by leaders of both counties as an ‘all-weather friendship’. It has been variously described as being ‘higher than the mountains’, ‘deeper than the oceans’, ‘stronger than steel’ and ‘sweeter than honey’. The two countries have colluded in developing nuclear warheads and ballistic missiles. They also cooperate closely in manufacturing military hardware — most of Pakistan’s weapons and equipment now come from China.

Relations between China and Pakistan warmed up with the China-Pakistan Economic Corridor (CPEC) beginning to take shape. Together, the two countries have been assiduously wooing Afghanistan, Iran and Russia to join CPEC for mutual benefit. India opposes CPEC as the project is being built through disputed territory in Gilgit-Baltistan and Pakistan occupied Kashmir (PoK). Part of BRI, the $62 billion CPEC project will provide rail and road connectivity between the Xingjian Province of China and Gwadar port on the Makran Coast of Balochistan. 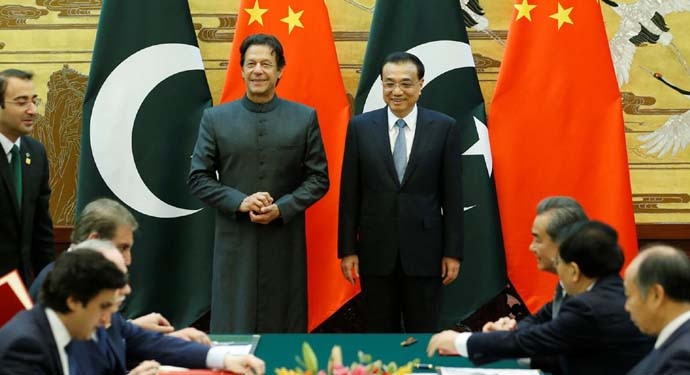 'Sweeter than honey' is how China-Pakistan describe their ties. But China is deeply concerned about its workers in Pakistan. (Source: Reuters)

China is extremely concerned about the safety and security of its workers engaged in construction, particularly those working on infrastructure projects located in Balochistan — Balochistan is Pakistan’s largest province, but has the lowest population (13 million) and is the least developed. The Baloch people never quite accepted the forcible merger of their province with Pakistan soon after independence from the British in 1947.

Since then, there have been several uprisings in Balochistan.

The current struggle of the Baloch people against Pakistani subjugation dates back to 2005 — the ethnic Baloch say they have been marginalised by the government and deprived of their rights. Thousands of people have been apprehended by the Pakistan army and police forces — many have gone missing.

Suddenly, the long-festering Baloch uprising took centrestage in world capitals with demonstrations being held in London to protest Pakistan’s brutal occupation — including several outside the Chinese Embassy to demand the cancellation of plans for the China-Pakistan Economic Corridor (CPEC). Demonstrations were also held in Berlin, Leipzig and Munich in Germany to showcase the Baloch cause for independence and to thank the Indian people for their support. There is anger among the Baloch over sharp poverty and the abuse of their human rights. (Photo: ANI)

Thanking the Indian PM for his words of encouragement, Khalil Baloch, chairman of the Baloch National Movement, said in a statement in Washington, “The Baloch nation hopes that the United States and Europe will join Prime Minister Modi and hold Pakistan accountable for the crimes against humanity and the war crimes it has committed against the Baloch nation in 68 years of its occupation of Balochistan and during the five wars that the Baloch nation has fought with Pakistan to win its national freedom.”

According to Nawab Brahumdagh Bugti, head of the Baloch Republican Party, "Balochistan is burning since the forceful occupation of the state in 1948. Since then, five major long-drawn military operations have been launched by the armed forces of Pakistan; the latest of them is still continuing. During this period of 66 years, Balochistan has suffered from gross human rights violations by the Pakistani forces which have been getting worse and accelerated with the passage of every single day."

Nawab Bugti had also said five years ago, "1,40,000 Baloch had been killed and at least 20,000 Baloch are missing since 2006." For over six decades, Pakistan has exploited the rich mineral resources of Balochistan extensively — the government of Pakistan does not pay them any royalty or give them what they consider their due share of the revenues generated from the mines. Due to the lack of transmission lines, electric supply to Balochistan is the lowest of all the provinces. Balochistan continues to remain the least developed province of Pakistan and poverty is rampant, leading to deep resentment among the people. Gathering Thunder: The Baloch independence movement is only growing. exactly where the investments are. (Source: Reuters)

It is also hampering efforts to build trans-national gas pipelines from Iran and Turkmenistan — with the potential to generate royalty worth US$ 700 to 800 million annually. Accepting responsibility for an attack on construction workers near Gwadar in which 10 labourers died in May 2017, Jeander Baloch, BLA spokesperson, said in a statement, "This conspiratorial plan (CPEC) is not acceptable to the Baloch people under any circumstances. Baloch independence movements have made it clear several times that they will not abandon their people's future in the name of development projects or even democracy." In previous years, some Chinese workers had also been targeted.

Pakistan is now raising a Special Security Division, comprising approximately 15,000 personnel, to provide security for the CPEC against terrorist attacks. Though the raising and maintenance of this force will considerably drive up the costs being incurred by Pakistan on CPEC, it is unlikely to be able to provide an acceptable degree of security because of the diversity of threats. The Chinese engineers involved in the construction of dams in Gilgit-Baltistan repeatedly asked for PLA soldiers to be inducted for security. Such a development in the case of CPEC — the presence of PLA personnel in Pakistan in large numbers — will further vitiate the security environment in South Asia.

An impression is rapidly gaining currency in Pakistan that the benefits of CPEC will accrue mainly to the Chinese.

Also, there are increasing misgivings within Pakistan regarding the long-term debt that the huge investment in CPEC will result in.

The Pakistani elite are watching carefully as more and more nations pull out from various BRI projects — of particular concern is the debt trap that the construction of Hambantota port and international airport has proved to be for Sri Lanka.

Also read: Pakistan had no intel about Balakot: How Pakistan is now amping up its surveillance

#CPEC, #Imran Khan, #India-China Relations
The views and opinions expressed in this article are those of the authors and do not necessarily reflect the official policy or position of DailyO.in or the India Today Group. The writers are solely responsible for any claims arising out of the contents of this article.