Christchurch vs Pulwama: Why the world's reaction towards the two terrorist attacks must be questioned

Both Christchurch and Pulwama were terrorist attacks, one against Muslims, the other against Hindus. Yet, why are both received so differently by the world in terms of reportage, analysis and emotional outpouring?

Located on the east coast of New Zealand’s South Island, Christchurch is an English heritage city. It is known for its quiet, picturesque bicycle tracks, gondola rides, street art, innovative projects, and more, making Christchurch a great tourist attraction. Before the first Europeans settled here in the late 1800s, it had been a dwelling place of several native indigenous tribes for centuries.

This beautiful city of about 4,00,000 residents — the third-most populous city of New Zealand — has seen its share of misery and destruction in recent past.

First, it was rocked by a series of earthquakes between 2010-2012 that saw large-scale devastation, including damage to many of its heritage buildings. This was followed by a major wildfire of 2017.

But what happened in the early afternoon of Friday, March 24, 2019, is not anything anyone would have imagined. 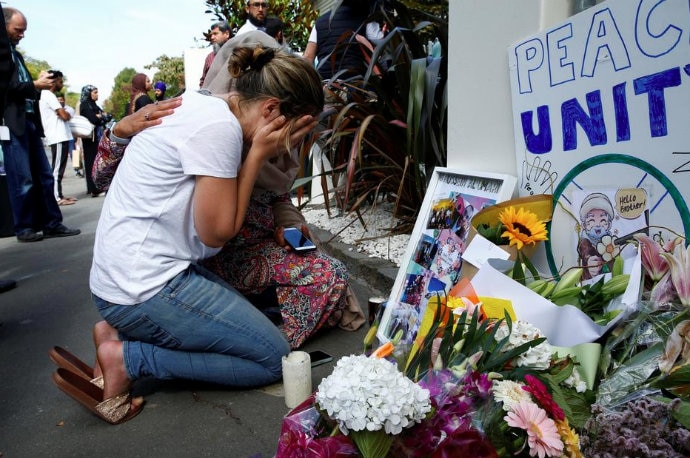 The people of New Zealand condemned the mosque shooting incident and stood up in solidarity. (Source: Reuters)

It started like any other Friday at the Al Noor Mosque in the suburb of Riccarton. The faithful had gathered there for the routine afternoon prayer. Suddenly, at about 1:40 pm, a shooter started indiscriminate firing at the congregation. By the time the ordeal was over, there were 50 dead and several others wounded. The perpetrator — a white supremacist — was arrested and charged with murder.

There was widespread condemnation of this ghastly attack, and rightfully so. This was a premeditated murder in cold blood, based on hatred and bigotry towards followers of the Muslim faith. The perpetrator belonged to the white supremacist ideology and that ideology was condemned in no uncertain terms. Leaders across the globe joined in condemning and calling out the hateful ideology behind it. Social media feeds trended hash-tags in sympathy. Op-eds were written by all major world media. In New Zealand, a week after the incident, the Muslim call to prayer was made across the nation on the day of mourning on March 22. The Islamic headscarf or Hijab became the symbol of solidarity the world over.

Barely a month prior to this terrorist attack, February 14, 2019, to be precise, there was another terror attack, in the picturesque Kashmir valley in India. A terrorist owing allegiance to the Islamic jihadist terror group Jaish-e-Mohammad (the Army of Mohammad) based in Pakistan had rammed his car full of explosives into a bus.

The bus was carrying members of paramilitary troops. 40 jawans died while others were left grievously wounded. The sharply anti-Hindu nature of the Pulwama attack was hardly talked about in international media. (Source: Reuters)

The perpetrator had released a suicide video. Besides political rhetoric, the video had purported references from the Quran. It also had specific reference to ‘impure’ and ‘polytheistic’ Hindus. Reference to ‘cow urine drinkers’ were also made.

In short, it was full of unambiguous hatred towards Hindus.

But, while Indians were trying to come to terms with the situation — after all, it wasn’t the first time they were subjected to such barbaric treatment — the world’s reaction, I felt, was far from what was desired.

The world press reported the attack. However, it was very tentative in writing on the incident, especially if you compare it to the reporting of the terrorist attack in New Zealand. In his brilliant analysis of the headlines and coverage specific to the US-based newspaper The New York Times (NYT), Vamsee Juluri of the University of San Francisco highlights the apparent bias in reportage. According to Juluri, “These stories convey some of the major events of the conflict, such as the attack, the Indian response (accusing Pakistan), the Pakistani counter-response (offering to cooperate in an investigation), the Indian airstrike, and the subsequent episode with the capture and release of an Indian Air Force pilot, all of these interspersed with editorials and opinion pieces on war, militarism in media and social media, and the agony of the Kashmiri writer.”

However, there were no sympathetic stories of the struggles of Indians who have been at the receiving end of Islamic terrorism for decades.

I looked at New York Times headlines on India since #PulwamaTerroristAttack closely and this is what I found. https://t.co/Dlee257jbA

Other international media outlets also presented a biased report of the event. Sadly, but not surprisingly, the anti-Hindu nature of the attack was entirely absent from international reportage. The following conclusion made by Juluri with regards to the NYT is also largely applicable to the rest of the world media:

“By spinning the mass slaughter of 40 Indians by a Hindu-hating suicide bomber into a vague discourse that hopped from India-smearing to outright marketing pleas for arms dealers… the Times has inadvertently raised some interesting questions indeed about what sort of path supposedly independent journalism is headed towards.”

Most world leaders were also not forthcoming in their condemnation of this terror attack as a targeted hate crime — despite all clear indications pointing towards it. A quick look at the Twitter timeline of these leaders will prove that.

On the contrary, the Christchurch attack was condemned by one and all as an attack on the entire Muslim community.

Similarly, we did not see a call for a Hindu prayer. Other than some protest marches and vigils by diaspora groups across the world, there were hardly any non-Indian groups who came forward in solidarity. On the contrary, such vigils in some quarters were painted as reactions from Hindu fundamentalist groups. In one such incident, a US professor (coincidentally of Indian origin) at the Ohio State University, Columbus, Ohio, complained in a letter to the editor about a vigil by one of the registered student organisations. 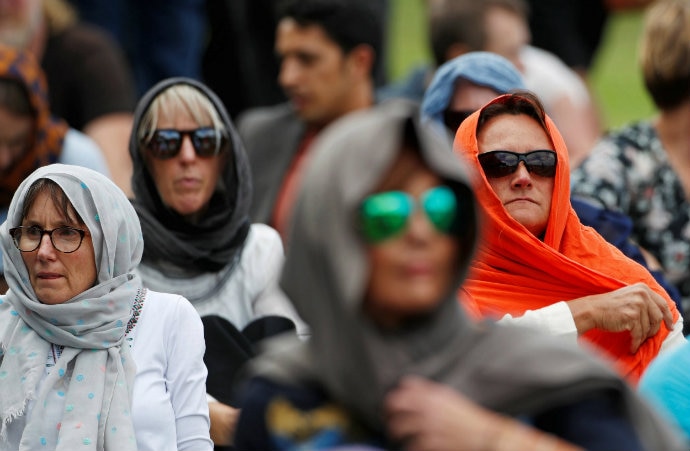 The 'hijab' became a symbol of solidarity. But after Pulwama, there was no mass application of 'tilak', for instance. (Source: Reuters)

There wasn’t any call for a mass application of ‘tilak’ or ‘sindoor’ either. Nor did we see people rush to wear ‘mangalsutras’ or ‘angawastrams’. Now contrast this to the mass emotions with women across the globe, especially in New Zealand and the West, wearing Hijab in solidarity with the Muslims.

Hashtag #Hinduphobia did not trend on social media either.

Indians have been persecuted for several hundred years now.

They have been persecuted for their beliefs that don’t conform to the predominant Abrahamic or Semitic belief system.

They have been persecuted for ‘moorti puja’ (idolatry), so-called polytheism, and their class structure.

Yet, they are probably the only ancient indigenous civilisation to have survived the onslaught.

And they continue to be the subject of scorn, devoid of any recognition and sympathy for their struggle and perseverance.