While the right-wing group called Hindu Sena (Hindu Army) was busy celebrating Donald Trump’s 72nd birthday in New Delhi — with a “havan”, cake and selfies alongside a larger-than-life poster of the US President — two other notorious Hindu-right groups, the Bajrang Dal and the Vishwa Hindu Parishad (VHP), have been classified as "militant religious organisations" by the Central Intelligence Agency (CIA), a civilian foreign intelligence service of the United States federal government.

According to a new report in The Print, as per latest updates made to the “World Factbook”, an annual encyclopaedic publication of the CIA that “provides information on the history, people, government, economy, energy, geography, communications, transportation, military, and transnational issues for 267 world entities,” the two organisations have been named as "militant religious outfits" under the tag “Political pressure groups and leaders”. 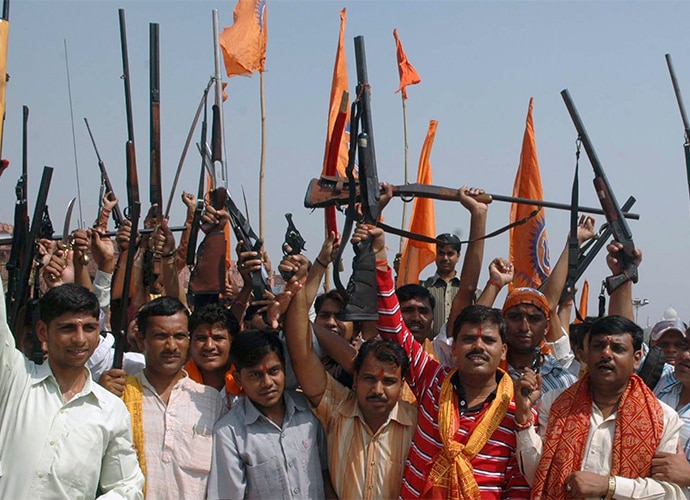 Meet the Bajrang Dal. (Not quite Bajrangi Bhaijaans). [Photo: Reuters]

They are not the only ones, however, that have received such earnest recognition.

And while the RSS’s categorisation can be debated (extensively), the Bajrang Dal and the VHP being called “militant” is a welcome step in identifying the menace hardline right-wing groups like them create in India. Of course, neither of them is particularly happy about this classification. Speaking to The Print, Manoj Verma, the national convenor of the Bajrang Dal said: “This came to our notice a few days ago. We are consulting experts and seeking legal advice to counter this.”

Another Bajrang Dal leader added: “Why would any intelligence agency cite our organisations as being ‘militant’. Who gave them the right? We have international branches as well but we’ve never troubled anyone. We are nationalists. We will see what can be done to get this right.”

Their indignation, however, is bluntly contradicted by their actions.

Barely 48 hours ago, on June 12, members of the VHP vandalised a 10x11 foot steel gate installed at the western entrance of the Taj Mahal by the Archaeological Survey of India, claiming it allegedly blocked access to the Siddheshwar Mahadev temple. Both the VHP and the Bajrang Dal often spout toxic anti-Muslim rhetoric and have been known to legitimise the “Love Jihad” bogey — where Muslim men supposedly conspire to seduce, marry and convert Hindu women to strengthen their numbers in India. The VHP, according to reports, employs a network of spies who work as restaurant employees across Western UP whose sole purpose is apparently to keep an eye out for “suspicious” (read interreligious) couples.

The Bajrang Dal, in fact, even organised an arms training camp to secretly train its workers and members to use arms; to "protect" Hindus, of course. Odd, for a group that claims it is not “militant”.

The VHP’s militancy has been a core feature of its ideology. One has only to see what VHP leader Pravin Togadia said in the wake of the BJP’s victory in the 2002 post-riot elections in Gujarat: “All Hindutva opponents will get the death sentence, and we will leave this to the people to carry out.”

And while this is not the first time a non-Indian government organisation has similarly classified such groups — the Bajrang Dal has apparently been previously described as “extremist” by the US State Department’s annual reports on International Religious Freedom because of assaults on religious minorities — this move by the CIA is a welcome reminder to a government that turns a blind eye towards such groups and the violence they perpetrate in the name of Hindutva.

It is only fitting that just two days after former CIA Director Michael Hayden called Donald Trump "unstable, erratic and thin-skinned," groups that have praised the US President’s Islamophobic tendencies have been brought to their own reckoning, at least in the eyes of the world outside India’s borders.