How Assam’s identity has been dealt a CAB blow

Assam has been at the receiving end of historical wrongs. Immigration is a sensitive issue in the state which needed a more nuanced approach.

The passage of the Citizenship Amendment Bill, 2019 (CAB) in the Lok Sabha led to huge protests by people from all walks of life throughout the Northeast region in general and Assam in particular. The North East Students’ Organisation (NESO), under the guidance of the All Assam Students’ Union (AASU), declared “11 hours’ Northeast Bandh” on December 10 in protest. The state has witnessed such an overwhelming spontaneous response for the collective cause of Assamese identity for the first time since the Assam Movement (1979-1985).

Even a strong critic of AASU would agree that the protest includes all sections of society with violent manifestations in certain parts of the state. The question is: Why such overarching protests against the CAB despite the Centre’s efforts to convince the people of Assam that it is in their favour?

There are many reasons for it.

Firstly, people consider CAB the final blow to Assamese pride and identity. AASU, along with other groups like Krishak Mukti Sangram Samiti, Asom Jatiyatabadi Yuva Chatra Parishad, and almost all University students’ unions, says CAB violates the Assam Accord of 1985 which was not based on religious grounds. The Assamese believe that the state has accepted March 25, 1971, as the cut-off date for the determination of foreigners, whereas it is March 24, 1948, for the rest of India. So, Assam bore the burden of 23 years of illegal foreigners. Subsequent Citizenship (Amendment) Acts of 1986, 2003 and 2005 have relaxed the process to acquire citizenship for the descendants of illegal migrants. 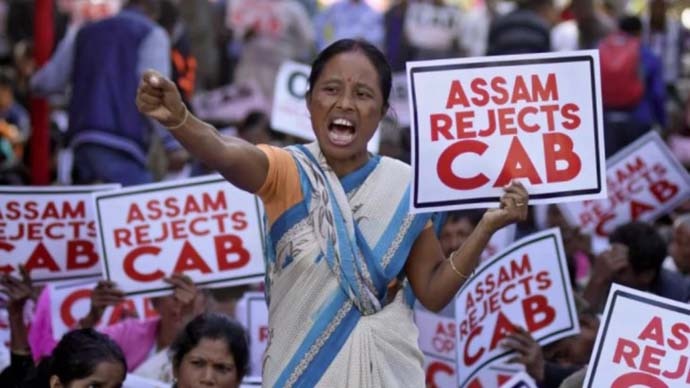 The fear is that Assam would soon become an immigrant-driven society. (Photo: Reuters)

Secondly, CAB, as presented in Parliament, would extend the determination of foreigners to certain religious groups from Pakistan, Bangladesh and Afghanistan till December 31, 2014. It is feared that the cut-off date is just a hoax to misguide the people as illegal Hindu migrants, as per the bill, don’t have to submit any persecution documents when they apply for registration as legal citizens of India. Mere declaration through affidavits would suffice to prove his/her citizenship. This may not authentically determine whether the person came before December 31, 2014, or till 2019.

The third apprehension is that the Bill does not suggest if such a deadline would be extended further as per political expediency. A person coming in 2025 may be able to apply for citizenship, though he actually came in 2014, as the bill does not prescribe any documents to be submitted as testimony to prove persecution or discrimination. This could open up a floodgate of Hindu migration in days to come, taking the already threatened Assamese language and culture to the brink of extinction.

The public imagination in Assam captures a figure of about more than 50 to 60 lakh foreigners in the state, the majority of whom are believed to be Muslims from erstwhile East Bengal. The number of nearly 19 lakh foreigners as identified by the National Register of Citizens of India (NRC) could rarely meet the expectations of the indigenous tribal and the Assamese people.

The mood for about 50 lakh illegal migrants was built by various non-BJP political dispensations at the Centre and in the state. On April 10, 1992, then CM Hiteswar Saikia gave the figure of 33 lakh in the state Assembly. On May 6, 1997, the then Home Minister, Indrajit Gupta, gave a figure of 40 lakh foreigners in the Indian Parliament. On July 14, 2004, then MoS Home Sriprakash Jaiswal said in a parliamentary statement that the total number of Bangladeshi infiltrators in India was 1.2 crore — 50 lakh (40 per cent of the total) in Assam — as of December 31, 2001. The numbers must have certainly increased in these years.

Meanwhile, there has been a huge change in the demographic and landholding pattern in the border and other districts of Assam. From merely two Muslim-dominated districts, today Assam has 11 East Bengal-origin Muslim-dominated districts. Between 1991 and 2011, Muslim growth in the state has been 5.79 per cent and Hindu growth has declined by 5.66 per cent. In seven border districts of Assam, from 1991-2011, East Bengal-origin Muslims have increased by 62.65 per cent compared to a 6.41 per cent decline among Hindus. Out of 126 Assembly seats, there are 51 constituencies where Muslims of East Bengal-origin play the most decisive role. This explains the near-extinction of a regional party called Asom Gana Parishad (born out of the Assam movement) that ruled the state twice.

The fear is that Assam would soon become an immigrant-driven society. The BJP’s contention is that the figure of excluded Bengali Hindus from NRC would not cross more than 5 lakh which can hardly cause any linguistic and cultural threat to the Assamese people. However, this figure, as BJP argues, would be detrimental in about 18 legislative constituencies in counterbalancing the challenge of Badaruddin Ajmal’s AIUDF. The anti-CAB agitation, its tone and penetration is very deep. Assam has been at the receiving end of historical wrongs. The passage of CAB in the Rajya Sabha is a defeat for BJP leaders. Immigration is a sensitive issue in Assam which needed a more nuanced approach.

Also read: A bumpy ride ahead for Citizenship (Amendment) Bill