Pulwama deaths are utterly tragic. But alongside civilians, an army jawan was also killed. Has he been forgotten already?

Kashmir has a long history of violence sparked by clashes between civilians and armed forces during encounters. To stop this nightmare, we must heed this history. Otherwise, we will simply keep repeating it.

Frenzied mobs of local Kashmiris gathered around the Central Jail, Srinagar, demanding the release of a mysterious non-state actor, a non-Kashmiri, an Abdul Qadir, who was under trial for a seditious speech reportedly made on June 21, 1931, after Friday prayers from the precincts of one of Kashmir's holiest shrines. As recorded in the Tarikh-i-Hurriyat, this apparent agent provocateur, most likely a British agent, who had mysteriously entered the state as a cook of a British Major, in his speech addressing local Muslims, reportedly asked them to use greater force, relying on their own strength to wage a relentless war against oppression. He pointed towards the palace and incited the crowds to raze it to the ground. He reportedly said, "We have no machine guns but we have plenty of stones and brickbats".

Despite precautionary measures taken by the administration, and pleas made to the crowds to turn back by the two Muslim lawyers representing the accused, thousands stormed the jail. They resorted to stoning officials, cutting off telephone lines and setting fire to police quarters.

Some prisoners were set free, firearms were snatched and police personnel were injured. When a lathi-charge proved ineffective and there was rampant anarchy, orders to fire were given by the District Magistrate and the Inspector General of Police, as a last resort.

What looked like mayhem and rioting became continued violence, much of which targeted local minorities. The Hindu traders of Maharajganj were apparently attacked and shops were reportedly raided. Vicharnag, situated five miles from Srinagar and inhabited by the minority community, saw hours of violence. It also saw the unfortunate deaths of 21 people who were amongst the rioting crowds.

The Army lays siege to Sirnoo, after getting information that three terrorists were holed up in the village. One of the terrorists, a local boy, Zahoor Ahmad Thoker, an army deserter, had gone missing last year from an army unit, decamping with his service rifle and three magazines. 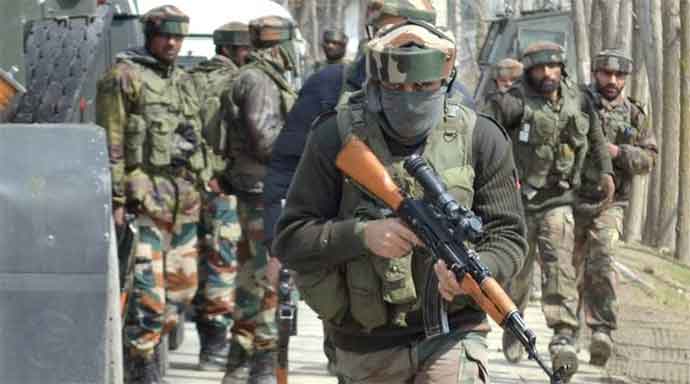 Security officials said when attempts, which included firing warning shots to disperse the crowds, failed, firing had to be resorted to. (Representational image/PTI)

He later surfaced as a Commander of the Hizbul Mujahideen and according to the security agencies, he was involved in many killings in the Pulwama district. Hizbul Mujahideen, the group Zahoor belonged to, has been declared a terrorist organisation by India, the European Union (EU) and the United States. This terrorist group, despite its claims, is not an indigenous movement — it is known to be reportedly funded and aided by the ISI, a non-state actor, and non-Kashmiri.

The news of this encounter spread like wildfire amongst locals via well-established communication channels. Immediately, frenzied crowds gathered at the encounter site, reportedly pelting stones and climbing over army vehicles.

The security officials said that when attempts – which included firing warning shots to disperse the crowds – failed, finally firing had to be resorted to. Seven civilians lost their lives.

An army jawan was martyred too.

Going back in time, the 21 rioters who unfortunately lost their lives on 13th July, 1931, were later declared martyrs by the Kashmiri establishment and a civic commemoration was institutionalised to pay homage to them every year henceforth.

The marking of this day ignored the grand conspiracy apparently waged by the British against a fiercely independent Maharaja. It overlooked the communalisation of an issue involving local governance. It turned a blind eye to the active role of an external non-J&K actor and the easy instruments that some local leaders became, thanks to their rising personal ambitions and greed for power and position. It also brushed aside the anti-Dogra campaign unleashed in the garb of 'anti-monarchy' anger, and the subsequent quashing of voices of other stakeholders in the state, widening the regional schisms in its wake.

Worse still, it rewarded a certain behaviour which, today, has become monstrous in its capacity to self-harm and harm others.

The tragic deaths of seven civilians in December, 2018, in Pulwama saw widespread anger and pain in Kashmir. The appalling incident received national and international attention. But the one uncomfortable fact that seemed to have slipped through the cracks in the coverage of this tragedy, as reflected in many a headline and byline, was that many of the civilians who had gathered reportedly in the hundreds at Sirnoo that day were part of an unruly mob, apparently trying to disrupt an encounter involving terrorists of the dreaded outfit Hizbul Mujahideen. Villagers and relatives grieve the death of those killed in the encounter in Pulwama on December 15. (PTI Photo)

This was later followed reportedly by thousands more arriving at the funeral of the slain terrorist, chanting pro-freedom and pro-Islam slogans.

Every loss of human life is deeply regretted — but the writing on the wall also states that many of those killed could have died shielding those who have been terrorising and killing innocents in the name of 'Azadi' and religion.

The Pulwama incident elicited widespread condemnation, and rightly so.

But somewhere lost in those replays and retweets was the utter horror of the minorities of the state, that yet again, a frenzied mob had gathered to protect a terrorist belonging to a terror organisation, known to have published a press release on 4th January, 1990, asking all Kashmiri Pandits to leave the Valley and which, till date, is killing fellow Kashmiris and JK-ians who stand opposed to their self-assigned mandate.

In the horror of the civilian bloodbath was also forgotten the martyred Army jawan from Rajasthan — who leaves behind old parents, a wife, two small children. He was duty-bound to protect his nation and its sovereignty. He did his duty. But perhaps, he has been forgotten. Already. Those in that village in Pulwama, who pelted stones and climbed onto army vehicles to stop him and his fellow jawans from doing their duty, saw him as their enemy. But many thousands more, across the same state, in Jammu and in Ladakh, saw the hero Shaheed Swar Kishore Singh was.

Most of the time, it is forgotten that the blood that often spills over in Kashmir is that of a soldier from the same state.

For every Hizb terrorist Zahoor is an Army Jawan Aurangzeb, hailing from Poonch district in Jammu and Kashmir, who bravely faced a brutal death in June this year, at the hands of terrorists, incensed apparently at his closeness to an army officer who had reportedly gunned down Hizbul Mujahideen Commander Sameer Tiger. Economic Times had reported some sources suspecting that in fact, an army deserter was responsible for Aurangzeb's abduction. Videograb of footage showing how army jawan Aurangzeb was kidnapped.

The civilian deaths now are deeply regrettable, as are the child soldiers that abound in this movement which finds no resonance with many Kashmiris, all Dogras, all Ladakhis and many other stakeholders in the state. We all think AFSPA must go — but before that, so must the weapon in the hands of a fourteen-year-old who fights for a cause that finds no consensus with the people of the land he fights on.

Calls for better-managed encounters are sound calls for better planning, but it is also important to call out those who were given the mandate to solve these deep-seated problems democratically, but instead played footsie with both democracy and soft separatism. Before more finger-pointing is done, the mirror must be shown to those so-called 'leaders of Kashmir' who feed off this violence by sending the poor man's child into harm's way.

It is also the responsibility of the media, experts and policy-makers to widen the discourse on the true nature of the conflict in Jammu and Kashmir and its resolution, by being inclusive and taking note of the opinions of all the stakeholders of the state, all of whom are organically interconnected.

Let's also be mindful of the fact that to every grand funeral of a slain terrorist in Kashmir stands a silent shrine or a small gate somewhere, dedicated to a soldier, a martyr, in Jammu region. People carry the body of a suspected militant, killed in retaliatory firing by the police in a gun-battle in Kulgam, during his funeral in Qaimoh, on 7th May, 2018. (Photo: Danish Ismail/Reuters)

On 13th July, 1931, Kashmir saw violent protests which had a non-state actor involved in instigating and abetting the violence. It saw the use of religious spaces to make speeches of hate and the riots that followed involved stoning and attacking military and police pickets, snatching firearms from police personnel, attacks on minorities, arson and a loot of public property.

To the Dogras and Kashmiri Pandits it remains a Black Day, even as the Kashmir-centric state government chooses to celebrate it as a Martyrs Day.

13th July 1931 most certainly set the precedent of pushing a single narrative and accepting only one victimhood — that of the Valley — as the only one for the entire state of Jammu and Kashmir. But what 15th December, 2018 in Pulwama brings into sharp focus is that this historical precedent also gave birth to a monster that has only grown stronger in the face of reward, and a lack of punishment. This has eaten away the Kashmiri Pandits from their homeland, oppressed the people of Jammu and does not stop from snuffing out dissenting voices from within the Valley itself.

Even as we must acknowledge the relentless role of the non-state actor in the Kashmir quagmire, let the onus of this tragedy, this violence, this nightmare be shared collectively.

Introspection, coupled with urgent course-correction, must be done now by parents, civil society, religious leaders and political representatives, to prevent any further loss of precious lives in the Valley. The abetment of dangerous patterns of behaviour must stop — and at least now, we must get our heroes from villains right.

Also Read: Pulwama killings: Kashmir is an ‘integral part of India’. If the integral part is bleeding, how is the rest of the country fine?

#Jammu and Kashmir, #Pakistan, #Zahoor ahmad thoker, #Pulwama encounter
The views and opinions expressed in this article are those of the authors and do not necessarily reflect the official policy or position of DailyO.in or the India Today Group. The writers are solely responsible for any claims arising out of the contents of this article.