2019 General Elections: Finally, the Congress gets it right

With the promise of implementing a Minimum Income Guarantee (MIG) scheme for India’s poor, the Congress has again begun the business of setting the narrative and a moral precedent. Whatever happens in the elections, the MIG promise is a recognition that India’s poor have never got their due as citizens with access to basic health and education facilities. Our most vulnerable citizens deserve legal and constitutional protection — and just the intent of this scheme sets the correct benchmark, never mind the fact that it has the potential to electorally benefit the Congress. I really don’t care about arguments regarding subsidising poverty and moving even further away from a free market. When we look at the extreme poverty and injustice all around us, we should rejoice at every little bit that goes to India’s poorest — besides, if corporate giants and failed airlines can be bailed out on public money, why can’t we create a small cushion for the poor?

For the Congress, the announcement of this scheme symbolises that moment in Election 2019 when they set the narrative — that is important for a party that is challenging the efficient and very rich election behemoth of the BJP.

If, on top of that, the Congress-Aam Aadmi Party (AAP) alliance is announced, it would be another instance of seizing the initiative and forcing the BJP to be reactive. The alliance with AAP would directly impact seven seats in the national capital but it would send reverberations across the political class that in India’s capital, the BJP can be defeated.

Potential BJP candidates are deeply worried and admit that only one seat — West Delhi — would be relatively safe while the possibility of defeat would be there in the other six seats in the face of an alliance. For AAP chief Arvind Kejriwal and Congress president Rahul Gandhi, it is, therefore, a straightforward ‘united we stand, divided we fall’ scenario in Delhi. 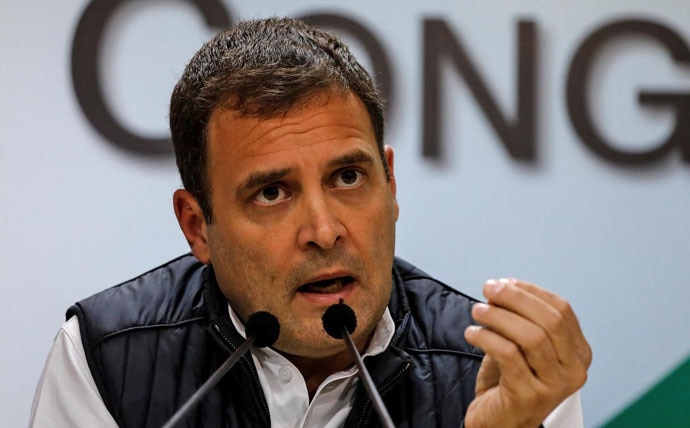 If you look closely: Rahul Gandhi, the Congress president, has been stitching alliances carefully across India. (Source: PTI)

Indeed, let’s look a little harder and recognise that while the media has been shouting about the failed national grand alliance, the Congress has, tortoise-like, sealed up almost all the alliances where the other side was willing to tango.

It’s easy to abuse the Congress — and the party has been a punching bag when a quick piece or column is required on the fly. There are multiple reasons to critique all political parties. But let’s look more closely, starting with the south.

The Congress is part of the DMK-led front that is best placed to perform well in Tamil Nadu. In Kerala, the United Democratic Front of the Congress remains intact and will be contesting the Left-led LDF. In Karnataka, the seat-sharing with the JD(S) has come through — in spite of all the doomsday scenarios painted by sections of the media. 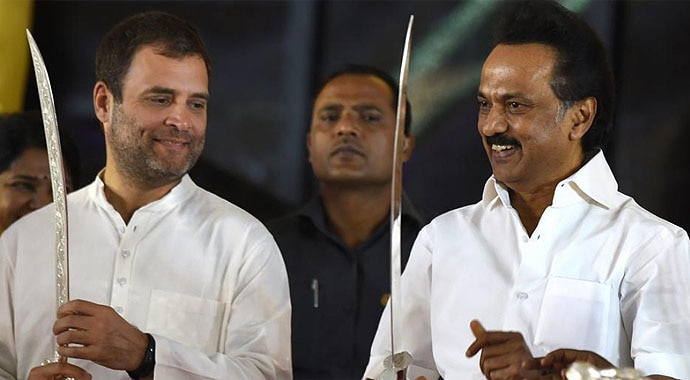 In Andhra, the Telugu Desam Party (TDP) is likely to go on its own against Jagan Reddy’s YSR Congress Party (Assembly polls happen simultaneously) but is unlikely to contest the Lok Sabha elections in Telangana where the Telangana Rashtra Samithi (TRS) just won the Assembly polls. The TDP has suggested it could transfer its support in Telangana to the Congress and thereby act as a ‘frenemy’. The Congress does not really exist as a significant force in Andhra any longer — it’s not clear what the strategy there is. The consolation is that the BJP too is a marginal player here.

Moving east, the Congress has finalised seat-sharing with the Jharkhand Mukti Morcha (JMM) and Babulal Marandi’s Jharkhand Vikas Morcha (Prajatantrik) in Jharkhand. Similarly, the Rashtriya Janata Dal-led alliance in Bihar has been settled after considerable wrangling that involved the Congress having to scale down its ambitions.

Where the Congress has failed is in sealing an alliance with Mamata Banerjee’s Trinamool Congress (TMC) in Bengal.

Rahul Gandhi recently attacked the law and order record of the TMC while campaigning in Malda, Bengal — and this does lead to questioning the very basis of the grand national alliance, were there to be an opportunity to create it after the results are declared on May 23. Also, it is well-known that there are no permanent enemies in politics. Our separate ways? TMC chief Mamata Banerjee is reluctant to forge an alliance with Rahul Gandhi in Bengal. (Source: PTI)

But frankly, the alliance not working is also partly due to the fact that the TMC is strong in the state and believes it can handle the resurgent BJP on its own. In the outgoing Lok Sabha, the TMC was the second-largest party — the Congress had 44 seats, the TMC had 34.

Equally, the Congress seems to have cut no ice with another formidable lady — Mayawati. The Bahujan Samaj Party (BSP) chief has been adamant about scuttling any possible inclusion of the Congress in the SP-BSP-RLD alliance that is arithmetically strong in Uttar Pradesh.

Left on its own, the Congress can’t exactly shut shop in the nation’s most populous state from where its own leadership stands. The party has, therefore, decided to follow its own data analytics input and put up candidates selectively and in a manner that minimises benefit to the BJP and in theory helps the grand alliance.

In the state with the second-largest number of seats, Maharashtra, the Congress has kept the traditional alliance with the Nationalist Congress Party (NCP) — but should have included Prakash Ambedkar’s Bharipa Bahujan Mahasangh (BBM) that will cut Dalit votes in the front it has formed with Asaduddin Owaisi’s All India Majlis-e-Ittehadul Muslimeen (AIMIM), with the latter getting a sprinkle of Muslim votes in specific seats. Sources say that Ambedkar wanted five seats that the Congress was not willing to give.

That brings us back to Delhi — where it’s critical for the Congress to stoop to conquer. It’s dragged on the process for way too long and AAP sources say they have instructions to begin the process of transferring their votes in the city to the Congress, the minute they get the signal from their leadership.

Will the tortoise do it — or does the hare win this race?

Also read: 2019 Lok Sabha polls: How Rahul Gandhi’s NyAY could bring the focus back to jobs and agrarian distress