The insecurity of one and arrogance of the other is what has led to the indecision over the seat-sharing agreement for the Lok Sabha polls.

A lack of clarity both within the Congress and Aam Aadmi Party (AAP) with regard to forging an alliance for the seven Lok Sabha seats in Delhi has left both voters and party workers confused.

With the elections so close, why exactly do the two parties appear so indecisive? In whose pocket? Congress and Aam Aadmi Party have failed to reach an agreement so far on an alliance in Delhi. (Source: Twitter)

I spoke to leaders on both sides and figured out that the insecurity of one and the arrogance of the other is what has led to the indecision over the alliance.

So, where do the two parties stand on the issue of the much anticipated tie-up?

The AAP wants an alliance in three states — Delhi, Haryana and Punjab. The Congress, however, is only willing for Delhi.

“Even for Delhi, the Congress is demanding 4 seats out of 7. How can we give more seats? The discussion is stuck at this for now. Without this alliance, the Congress will not be able win seats in Delhi. They should realise the alliance is important,” said a senior AAP leader.

According to sources in AAP, fresh rounds of talks were held on Thursday, April 4, on Delhi and Haryana. The issue of Punjab has been put on hold for now. The AAP leaders accuse the Congress for the delay in forging an alliance, saying the party is showing no urgency on the issue. The party states that an alliance victory today will “help Rahul Gandhi more and not Kejriwal”. The AAP leaders allude to the “slow thought process” of Congress leadership even as they await a confirmation from the grand old party.

The party feels the Congress-AAP alliance in three states can stop the BJP at least on 20 seats. So, AAP leaders ask, “if the agenda is to stop the BJP” from gaining more seats, then why are talks not progressing?

One reason why the AAP wants to win significantly in the Lok Sabha elections is that it wants to push for its demand of full statehood for Delhi. In order to push this agenda in Parliament, the AAP would need members in Parliament. One of the grounds on which the AAP is negotiating the seat-sharing deal is that the Congress should back its demand for full statehood.

The Congress has reportedly remained non-committal on this condition.

Sources in the party are cautious because AAP came to power by targeting Congress on corruption. A debutant politician, Arvind Kejriwal, defeating three-time chief minister Sheila Dikshit in 2013 had reflected poorly on the party.

Hence, the Congress is cautious to not be seen giving into the demands of a smaller party. Senior members of the party have already expressed their apprehensions over this issue to the national leadership. They feel the ‘grand old party’ will suffer by aligning with Arvind Kejriwal.

A senior Congress leader said, “The Congress is an old and big party. So, there should be no need for an alliance. We lost last time but we also won so many times. A lot of work done in Delhi was due to the Congress party. Plus, AAP has already declared candidates, so why is it approaching us now?”

Sources have agreed talks are on. 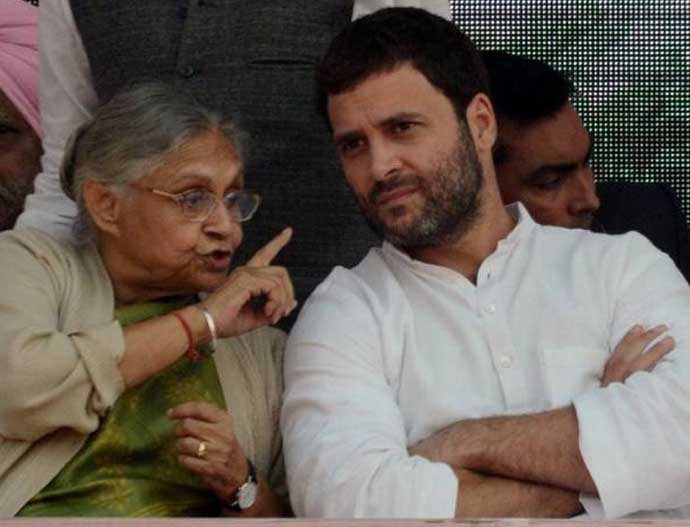 In her view? Source suggest the Delhi unit of the Congress is against an alliance with the AAP. (Source: PTI)

Interestingly, the Delhi Congress leaders were kept put of the recent round of talks between the AAP and the Congress. A leader involved in talks gave a guarded response, saying, “Too early to say anything about the talks. I cannot reveal any final decision at this moment.”

It is important to note that both the Congress and AAP have similar a vote-base — the lower middle-class.

Many economically backward localities were authorised and provided subsidies during the times of Indira Gandhi and Rajiv Gandhi. Decades later, people there still swear allegiance to the Nehru-Gandhi family and are willing to vote for the Congress. Sheila Dikshit’s reign was also known for infrastructure development in the national capital.

Will Congress be able to convince its key base to opt for a different party’s candidate — a smaller party at that?

A leader also added that the Congress cadres in Delhi and Haryana are not convinced. Many have expressed concerns over working with the AAP.

The Congress is aware the AAP is on a solid footing in Delhi and thus, an alliance may end up only making the AAP stronger — pushing the Congress out of the game completely.

The final decision on the issue, however, will be taken by party president Rahul Gandhi.

Also read: A bold new Congress: From alliances to AFSPA, how the grand old party is newly asserting itself

#Arvind Kejriwal, #2019 general elections, #Congress, #Congress-aap alliance
The views and opinions expressed in this article are those of the authors and do not necessarily reflect the official policy or position of DailyO.in or the India Today Group. The writers are solely responsible for any claims arising out of the contents of this article.