When The Hand Shakes: Congress looks incredibly weak and unsure. The Article 370 moment has hit it the hardest

Adhir Ranjan Chowdhury appears a joke; Rahul Gandhi tweets when he should be mum. And the CWC fails to mention the Congress' past achievements. Can a new leader even help?

Intrigue and confusion are fast becoming synonymous with the Congress — the abrogation of Articles 370, 35A and the bifurcation of Jammu and Kashmir into J&K and Ladakh could not have come at a worse time for the grand old party, battling not just leadership but also an existential crisis. Why is the hand shaking? India's grand old party is staring at an existential crisis. (Photo: Reuters)

Despite having a rich and nuanced history of dealing with the chequered past of J&K, the Congress came out as a thoroughly unprepared and hopeless party, both in the Rajya Sabha and the Lok Sabha. The Congress leader in the Lok Sabha, Adhir Ranjan Chowdhury, appeared every bit a joke, giving credence to some of the apprehension this columnist had expressed at the time of his appointment.

Even as many voices of dissent were heard from across the country over the Congress’ sloppy stand on the abrogation, the Congress Working Committee (CWC) met belatedly to make some amends. Its resolution sought to correct Chowdhury’s follies and asserted, “The Indian National Congress feels that J&K, including the areas under the illegal occupation of Pakistan and the part ceded by it to China, is an integral part of the Republic of India. The integration of J&K with India is final and irrevocable. CWC firmly asserted that all issues pertaining to J&K are internal matters of India and no outside interference will be tolerated.”

The CWC resolution, however, failed to mention the February 1994 Parliamentary resolution that was moved by Congress Prime Minister PV Narasimha Rao that the country had an “unfinished agenda” to capture Pakistan Occupied Kashmir (PoK).

Some other basic but significant elements were missing that could have reminded the younger generation of Indians that it was under Congress regimes that the country won three decisive wars against Pakistan. It was a Congress Prime Minister, Pandit Jawaharlal Nehru, who jailed one of his best friends, Sheikh Mohammad Abdullah, for nine long years on grounds of suspicion of hobnobbing with foreign forces. And it was a Congress president, Indira Gandhi, who made a Congress ministry in J&K, headed by Syed Mir Qasim, step down in favour of Sheikh Abdullah to restart the process of political reconciliation in J&K.

More importantly, the CWC failed to tell the story of the party’s hurricane efforts to defend, under most adverse international conditions, Article 370 notifications between 1950 and 1954, which helped to keep Kashmir calm.

It allowed the state’s integration with India and prevented Pakistan from taking any advantage at international forums or the catastrophic eventuality of plebiscite.

The CWC resolution, perhaps the strongest in terms of its wording in recent times, has come when the party is about to pick Rahul Gandhi’s successor.

The conduct of some of the key players, namely Jyotiraditya Scindia, Milind Deora and others, therefore needs to be seen in the context of an internal power tussle.

Scindia is certainly not a rebel or positioning himself for a life outside the Congress. Deora is edgy (Priyanka Gandhi has reportedly tried to persuade him and Amit Deshmukh to stay on). Given a chance, Scindia would reportedly want to be Rahul’s successor or one of the top five decision-makers. There is a fair chance of him getting that sort of position. In the already crowded BJP, chances of an entry and honourable existence are slim, given Amit Shah and Narendra Modi’s disdain for dynasts. If any Scindia supporter has a doubt, s/he needs to look at Varun Gandhi, three-time Lok Sabha winner, but nowhere in the reckoning.

The CWC is meeting again on Sunday.

There are two schools of thought within the Congress. One group wants a leader from the younger lot as the new president, such as Sachin Pilot, Jyotiraditya Scindia and Milind Deora. Others want Mukul Wasnik, Sushil Kumar Shinde or Mallikarjun Kharge as interim chief with three vice-presidents — Pilot, Scindia and Deora. 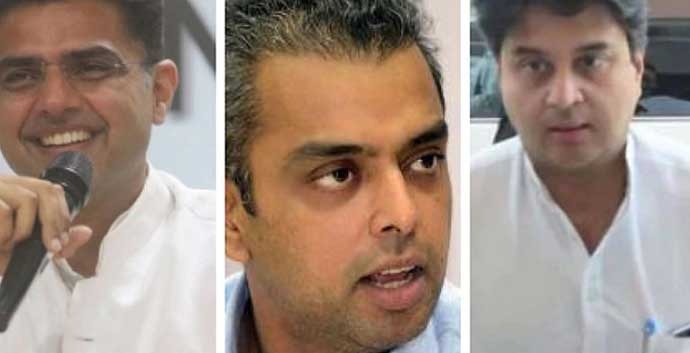 Possible Presidents? The Congress is split over whether these younger leaders should get the top job — or be VPs. (Photos: IANS)

These designs have a potential of upsetting the existing power balance within the Congress.

What is not being talked about enough is a lack of self-belief within the Congress due to the back-to-back (2014 and 2019) successes of the Modi-Shah combine.

The fall of a centrist party is not so much due to successive poll reversals but the prospects of a bleak future for another 10 years. For a large number of Congress leaders between the age group of 50 and 60 years, this phase is endless in terms of fetching loaves and fishes. This is one area where the Gandhis are utterly helpless — prepared to accept defections and desertions at all levels.

Privately, the Gandhis are deeply exercised over the Article 370 narrative being converted into a liberal versus conservative debate. For Priyanka, Congress action should be solely guided by what’s best for India’s sovereignty and federalism — but somehow, that message is not coming through.

Rahul apparently continues to be guided by the likes of Sam Pitroda and Jairam Ramesh. After making an unconditional offer to exit, the outgoing Congress president has made a habit of putting on tweets that cause acute embarrassment to the party. Post-August 10, or whenever the new party chief is named, Rahul’s presence as a leader-at-large is going to pose a bigger challenge than anything else.

A split within the next six months cannot be ruled out.