Reclaiming soft Hindutva: Why both Congress and RSS have the same strategy

The Rashtriya Swayamsevak Sangh (RSS) sarsanghchalak Mohan Bhagwat spoke of the need to integrate, the need to co-exist. He said that the very phrase “minority” is abhorrent in an inclusive society.

Although Bhagwat stuck to the basic premises like abrogation of Article 370, Ram Mandir and the uniform civil code (UCC), he did make an effort to assuage feelings of the minority communities. The ideologue, of course, did not espouse persecution; it is too Right-wing to be minority-friendly. But he seemed to make an effort to “explain” the RSS’s stance at the “Bharat of Future” event in New Delhi. Cow related violence was also addressed — he did not encourage vigilante style “gau rakshaks” in his address.

Was the RSS chief looking for an image makeover? Was he trying to project a softer face of “Hindutva” ahead of the 2019 Lok Sabha elections?

It could be true; or at least, partially so.

And he isn’t the only one trying to do so. Both of the main contesting fronts — the Congress and the Bharatiya Janata Party (BJP) — are attempting an image makeover. The young Congress chief, Rahul Gandhi, left no stones unturned to harp his “Shiv Bhakti” and who can ignore the new descriptor that Congress spokespersons have started using as a sort of prefix to Gandhi’s name: “Janeu Dhari”. 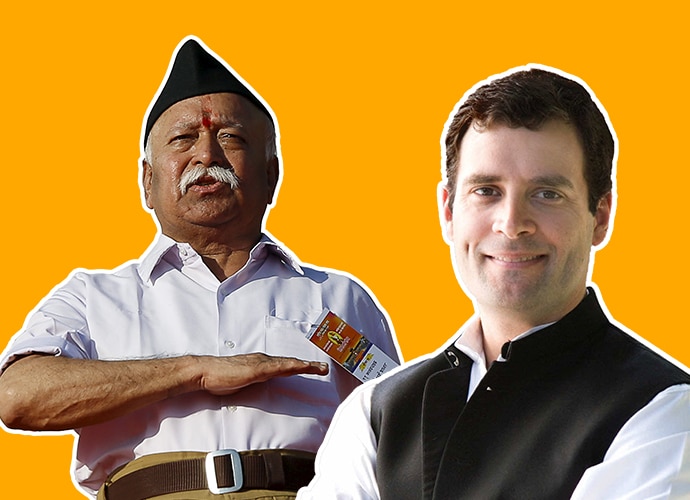 All paths lead to the same goal. Both, RSS and Congress want soft Hindutva. (Photo: DailyO)

Someone once famously said that all paths lead to the same goal. Although I do not remember who said it, I bow before the timelessness of his logic.

That a hardliner, and an ideologue, has to seek out a softer approach is symptomatic of many things that ail the BJP and the Hindutva Right. A lack of visible economic progress, galloping petrol prices, huge anti-incumbency in at least three states going to the polls soon. None of it spells good news.

Statistical "wizardry" does not hide the clear absence of a solid and dependable economy. No wonder that Bhagwat has been pushed towards peddling a slightly softer line. It is, however, possible that the RSS is already looking beyond 2019, perhaps to 2024, when the RSS would be completing its one hundred years.

Congress is facing its own crisis.

Despite a Karnataka victory (of sorts), the organisational spurt to take on the formidable election machinery of the BJP is still not in place. These upcoming assembly polls will be crucial for the party. At least two states needs to be in the Congress kitty to boost the morale of party workers ahead of the general elections.

Anything less and voters would be tempted to extend support to the BJP.

Besides, as powerful regional satraps work behind the scenes to sew up a non-Congress, non-BJP opposition, the Congress party finds itself in an existential void —they are no longer the automatic choice to lead a secular, slightly socialist coalition.

The RSS usually does not try to catch up, strategy-wise in an electoral chess board. It’s almost a rarity.

The government, of course, can be expected to do some damage control in the run-up to the elections, like pushing through an ordinance annulling Triple Talaq. The Opposition will find it difficult to block it in Parliament, especially because the Congress may no longer find that every Opposition party is keen to toe its line in the house of the people.

#Soft-hindutva, #Rahul Gandhi, #Congress, #RSS
The views and opinions expressed in this article are those of the authors and do not necessarily reflect the official policy or position of DailyO.in or the India Today Group. The writers are solely responsible for any claims arising out of the contents of this article.