How to make a new Congress: A blueprint for a grand new opposition party

The old party needs a Plan B that involves dissolving what remains of the national party until a new leader is elected/selected/chosen.

And if the enterprise is failing, surely a restructuring is the need of the hour.

It’s been over two months since the May 23 defeat of the Congress (and many other opposition parties). Since then, a government in the state of Karnataka has fallen — but we have no clarity on anything in the Congress party. The grand old party that once led us to independence now appears to be comatose with a few signs of life from individual state leaders.

Since many of us now expect a long uninterrupted reign of Narendra Modi and Amit Shah, we have almost stopped caring.

Yet, every now and then, we need to force ourselves to follow the tedious story in the Congress basically around Rahul and Priyanka (will they, won’t they). Can they manage? Or not? Rahul and Priyanka Gandhi must make their stand clear on the Congress' leadership. (Photo: Twitter/Congress)

We need to care not because dynasts matter but because democracy, without dissent or a viable opposition, is no democracy at all. And at the end of the day, the Congress is still the most significant opposition force in the country.

Here’s what we know has happened up to now.

Rahul Gandhi has resigned as Congress president and says he’s determined to quit and expects the Congress to find a new president — but nothing has really moved on the front. We wait for him to return from the US for further updates on this now two-month-old story.

The second parallel storyline is about Priyanka Gandhi.

There continue to be Congress members and journalists who believe that Priyanka will eventually rise to the occasion. She has, meanwhile, posted wedding pictures of herself and Robert Vadra during a #sareetwitter trend earlier this month. She also posted a childhood picture with the great Nelson Mandela, saying he had told her she ought to be in politics. Many read deep meaning into that tweet.

The world misses men like #NelsonMandela more than ever today. His life was a testament to truth, love and freedom. To me, he was Uncle Nelson (who told me I ought to be in politics long before anyone else did!). He will always be my insipration and my guide. pic.twitter.com/JaPeHkT69g

Priyanka then went off to Uttar Pradesh, giving the impression that she was in for the long fight till the 2022 Assembly elections in the state. Articles were written on this. Then she returned to Delhi and new articles appeared, saying she has told senior Congress leaders she is not interested in becoming president of the party. She will apparently do so much and no more.

That’s where the story currently stands.

There are only two conclusions we can come to: both brother and sister are not interested in being Congress president. Or, both secretly want it but because of injured pride, existential dilemmas and/or sibling concerns, they are saying no. If the truth lies in reason number two, then someone should remind the first family of the Congress that it’s the feelings of the voters they should be concerned about, not some inner family dynamic.

But let’s say Plan A involving dynasty is not taking off.

How about a Plan B that involves dissolving what remains of the national party till a new leader is elected/selected/chosen?

Step 2 of Plan B involves making the Congress a federal front of all the parties that are actually offshoots of the original Congress.

Call it the 'New Congress' that includes the NCP led by Sharad Pawar, TMC led by Mamta Banerjee and YSR Congress led by Jagan Reddy. Obviously, none of the important state satraps would merge if their egos and interests are not met. This would involve the Congress making way for state forces and in fact even dissolving some state units, such as in Andhra Pradesh or Bengal, as an act of good faith. (Even after the defeat on May 23, the Congress has moved in a unilateral direction, for instance, when it appointed Mamta-baiter, Adhir Ranjan Chowdhury, MP from Behrampore, leader of the Parliamentary party. But, in the end, for any future opposition, the separate parties will have to act together in a more sustained way than they did in the 2019 election). 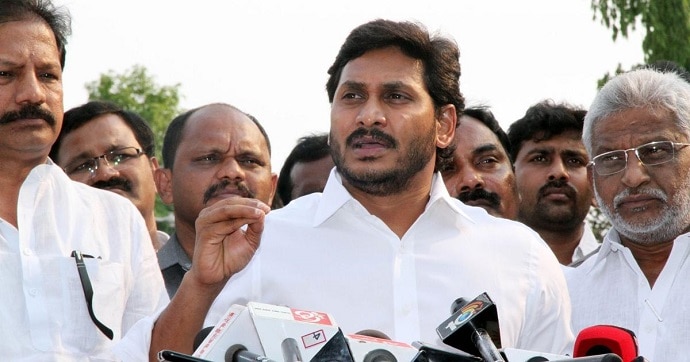 Part of Plan B? Could Jagan Reddy be a link to a Naya Congress? (Photo: IANS)

But to return to Plan B, besides the regional parties born of the Congress, we do indeed have a few Congress state governments left, so there is something left to save. There are still Congress chief ministers in Madhya Pradesh, Rajasthan, Chhattisgarh and Punjab.

And finally, the chief minister of Punjab is right — the new leader has to be young if there is to be any hope for the future. Young, telegenic and articulate are the bare minimum requirements in the age of multimedia explosion.

That is beside the necessity of creating a genuine federation at the time when the BJP is moving towards a more centralised model.

Also read: Get a grip, Congress! The party blames BJP for all its woes. But has it ever looked at these weaknesses within?