Coronavirus pandemic: The impact of a delayed harvest

Farmers are worried about the fallout of Covid-19 on the harvest season.

The rains in the first three weeks of March followed by the nationwide crackdown on the Covid-19 could delay the harvest of wheat in North Indian states. The harvest season for Rabi crops—largely wheat, sown between October and early December — starts in the first week of April. It is expected that due to inclement weather the delay could be for at least a fortnight. But their fear is; because of Covid-19, farmers in most parts of these states may not find ample labour.

The Nirmala Sitharaman-led ministry of finance is looking at an improved disbursal mechanism of minimum support price (MSP) to kickstart the economy in rural India. The Narendra Tomar-led ministry of agriculture expected that this year’s wheat crop could be around 109 million tonnes, 6.27 per cent more than the previous year’s output. For this year, the minimum support price for wheat is Rs 1,925 per quintal. Although the agriculture ministry’s MSP list has more than two dozen crops, state and central agencies procure wheat in Rabi and paddy in Kharif season. 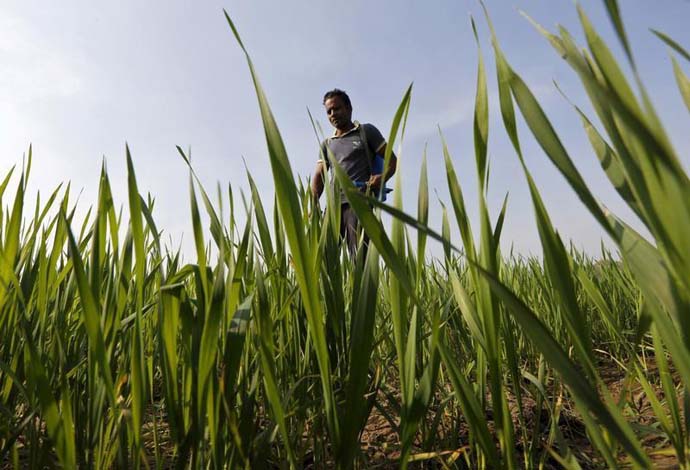 Though the government had high expectations from the wheat crop earlier, due to the recent delays and crises, there may be trouble brewing for farmers. (Photo: Reuters)

Farmers are worried about the impact of Covid-19 and the crackdown on harvest and may find it difficult to hire labour. On March 22, the union government in consultation with their counterparts in 22 states and UTs, announced lockdown in 75 districts. For one week, Punjab and Haryana, along with many of these states will have a shutdown of the public transports. The farm labour generally travels from eastern UP and Bihar to do the job in Punjab and Haryana.

Meanwhile, the farmers say that their fields are clogged with rainwater, or hailstorms have flattened the standing crops. The wheat requires bright sunshine to evaporate the moisture. This requires more time in the field before the crop can be harvested. But the damage is inevitable. Punjab and Haryana have already asked revenue officials to ascertain the losses. These are extraordinary days and will require extraordinary solutions.

Also read: Why Finance Minister relaxing IBC is the most important move for businesses

Post your comment
#Coronavirus in india, #Coronavirusreliefmeasures, #Farmer crisis, #Covid19
The views and opinions expressed in this article are those of the authors and do not necessarily reflect the official policy or position of DailyO.in or the India Today Group. The writers are solely responsible for any claims arising out of the contents of this article.