While Beijing needs to flaunt its ‘true friend’ to the world, and Islamabad needs a counterweight to its ‘eternal enemy’ India.

One of the consequences of the Covid-19 pandemic is that China is losing admirers and friends faster than the virus is infecting people. This isn’t so much because the origins of the virus lie in China as it is because of the way China has handled the entire crisis.

The cover-ups coupled with calumnious diplomacy and the coercive tactics adopted by China's ‘Wolf Warrior’ diplomats have incensed global public opinion and hardened official attitudes towards China in most parts of the world. Slowly but surely a backlash is developing.

From closing Confucius Institutes to demanding a ‘pandemic tariff’ on Chinese goods, from recommending cancelling Chinese investments in government securities to moving out manufacturing facilities from China, from imposing controls and restrictions on Chinese investments to inching towards building alliances to contain China, it is all happening. 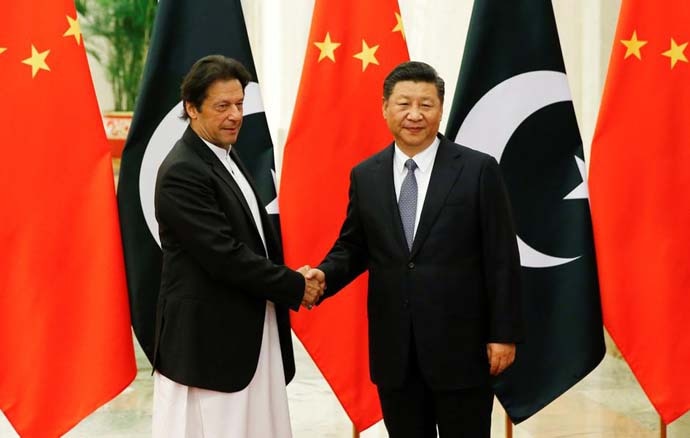 For its part, Pakistan cherishes its friendship with China and will want to preserve it at any cost. (File photo: Reuters)

In many ways, China is today becoming as friendless as it was before it started opening up to the world in the late 1970s. It is precisely because of this unfolding spectre that China will double down on keeping its relations with the few friends it has left. Among the top in the list is India's neighbour from hell – Pakistan. For the longest, the Chinese and Pakistanis have described their friendship as being ‘higher than the Himalayas, deeper than the oceans, sweeter than honey and stronger than steel’. In recent years, they call each other Iron Brothers. A top Chinese general had once termed Pakistan as China's Israel. When once asked why China puts Pakistan on such a high pedestal, a seasoned Chinese diplomat is believed to have replied that China doesn’t have many friends, and would, therefore, like to nurture the few friendships it does have. And this was when China's name wasn’t in the mud. In fact, at that time China was busy making new friends and, as the phrase goes, ‘buying influence’. If this was then, now more than ever before, China will do everything possible to keep its friends on its side. In other words, for the foreseeable future, Pakistan will remain China's BFF (best friend forever).

For its part, Pakistan cherishes its friendship with China and will want to preserve it at any cost. While Pakistan will eagerly grab any money that the gullible West throws its way, it will not do anything to jeopardise its relations with China. Simply put: both China and Pakistan need each other – China needs to flaunt a ‘true friend’ and what it can do for that friend to raise its game; Pakistan needs China as a counterweight to its ‘eternal enemy’ India, and for all the economic, military, technical, diplomatic and political assistance that China provides it. In a sense then, this is a relationship of mutual dependence between two unequal countries. Given the asymmetry between the two countries who gains more from the other is somewhat complicated.

For instance, over the last couple of years, the Chinese have been pumping in billions of dollars to save Pakistan from economic bankruptcy. This is over and above the around $20 billion investments made by China in the China-Pakistan Economic Corridor (CPEC). On the face of it, therefore, it would seem that China is now Pakistan's Sugar Daddy. But look a little more closely, and what you see is that China isn’t giving any free lunch to Pakistan. If anything, it is charging the Pakistanis top dollar by setting up projects at grossly inflated prices, by capturing the Pakistani market through cheap exports and steadily ensuring Pakistan's deindustrialisation, by developing a strategic relationship that is aimed at giving China more than a toe-hold in the Western Indian Ocean, and by plying Pakistan with loans that bind it irretrievably to China.

Pakistan, of course, knows it is being had. But two interlinked factors prevent it from questioning China’s sharp practises. The first is that China is the only game in town for Pakistan. Who else is ready to sink in as much money into a black hole like Pakistan? Second, the Pakistanis feel that when the payback time comes, they will be able to leverage their friendship to get the Chinese to write-off their loans and alter the terms of business deals in Pakistan's favour. A few weeks back, the Chinese ambassador declared that China will never force Pakistan to repay its loans in time. Pakistanis are also now trying to renegotiate their repayment obligations on the CPEC power projects set up by Chinese companies. The Pakistanis calculate that China values them so highly that it won’t do anything to sour the relationship.

Cut to the chase, both China and Pakistan think they are getting what they want out of the relationship. This mutual dependence will only increase as the backlash against China intensifies. Pakistan will feel that it can get more out of China on the economic, military and diplomatic front by sticking with it even as the rest of the world starts adopting diplomatic distancing norms with China. As far as India is concerned, China has hardly shown any consideration for India's core interests. As recently as January, China tried to once again raise the issue of Jammu and Kashmir in the UN Security Council to appease Pakistan. India, therefore, needs to stop its strategic hedging on China and become part of the developing international consensus against an unfriendly communist China.

Also read: Why India should not worry about China-Pakistan ties