How PM Modi scored with COVIDiplomacy

Prime Minister Narendra Modi has once again, proved that if there is anything predictable in his foreign policy, it is unpredictability. Disrupting conventional thinking, he invited all SAARC leaders for a video conference to fight the Wuhan Virus.

I would like to propose that the leadership of SAARC nations chalk out a strong strategy to fight Coronavirus. We could discuss, via video conferencing, ways to keep our citizens healthy. Together, we can set an example to the world, and contribute to a healthier planet.

Within a couple of hours of his tweet, all the SAARC member countries responded positively, except of course for one country – no prizes for guessing which one. Pakistan went into a major huddle trying to figure out how to play the ‘googly’ bowled by Mr Modi.

But it wasn’t only the Pakistanis; Modi’s detractors in India received the initiative with their trademark derision of everything he does. They sniggered over India was reaching out to SAARC countries when India itself had questioned the relevance of the regional grouping. Worse, there was wild speculation about whether this was Modi’s way of climbing down on his tough policy towards Pakistan, whether this was a ice-breaker to restart some kind of an engagement with Pakistan, and whether the Modi government is re-evaluating its stand on SAARC. Unfortunately, instead of understanding the purpose of Modi’s COVIDiplomacy, these people reduced it to only Pakistan, little realising that Pakistan was at best a sideshow in the larger scheme of things.

Let us for the sake of argument accept for a moment that Modi’s COVIDiplomacy was aimed primarily at Pakistan. Unless Modi is being misled on Pakistan by his officials, or by his interlocutors in rest of the world, or has been bitten by the bug that afflicted his predecessors of emerging as an international statesman by winning over Pakistan, he would know that nothing good is ever going to come out of engaging Pakistan, at least not until Pakistan undergoes a complete ideological metamorphosis and stops looking at India as an enemy that must be destroyed. Clearly, there is no sign of any such transformation. Quite to the contrary, with the Islamofascist Imran Khan at the helm, the prospects of any rapprochement are practically zero. On Pakistan, Modi has shown far greater realism and harbours far less romanticism about Pakistan than all his predecessors. Therefore, if indeed his latest gambit is primarily aimed at Pakistan, then with what purpose? It is unlikely that he was looking for an opening with Pakistan. 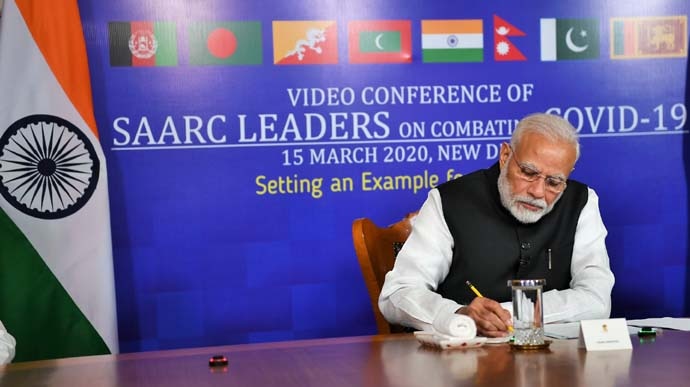 Almost all regional leaders looked to India to take the lead, which Modi was quite prepared to do.  (Photo: Twitter/ @narendramodi)

What is more likely is that he used the Coronavirus crisis to make a double-play: one, play the statesman by reaching out to India's neighbours and even rising above all the bad vibes with Pakistan to focus on urgent crisis facing all the countries of the region; two, catch Pakistanis in a quandary, and isolate and expose it as a churlish, petulant and puerile country incapable of rising to the occasion and responding maturely to what is tuning out to be a global health emergency. Modi appears to have succeeded in both his plays.

His COVIDiplomacy clearly emphasised his ‘Neighbourhood first’ policy. He positioned India as the most well-prepared country, which is willing to coordinate with its neighbours and devise a common action plan, lend assistance and expertise where required, and share best practices given the commonality of problems, and challenges confronting all the countries in the region.

All the regional leaders appreciated the initiative, shared their experiences and made important suggestions on how the region needs to work together to not only combat the health crisis posed by Corona, but also mitigate the economic impact that this crisis will leave in its wake. Almost all of them looked to India to take the lead, which Modi was quite prepared to do. In fact, even before this initiative, the Modi government had reached out to assist Maldives and also evacuate citizens of neighbouring countries from China. In a way, Modi has emphasised India's stakes in the region and not allowed China or any other country to capitalise this crisis.

As far as Pakistan was concerned, it was caught wrong-footed by Modi’s COVIDiplomacy. If Imran Khan had ignored Modi’s proposal, he would have looked bad – remember that thing about ‘small men in big offices’? If, on the other hand, he accepted the proposal, he would have exposed himself to attacks by his opponents and it would make his anti-India, anti-Modi rhetoric sound hollow.

The Pakistanis understood this and that is the reason they took so much time responding. And when they did respond they agreed to participate but at the level of a special assistant to the Pakistan PM. Of course, Imran’s flunky behaved no better than what was expected of a Pakistani. He made a stupid, inappropriate, factually incorrect and completely disingenuous reference to Kashmir. Equally grating was the fact that at every stage he sang out of tune by wanting everything to go through the SAARC secretariat rather than India. Like a good client state, he went ahead to suggest bringing in SAARC observers – read China – to also participate in the collaborative efforts being contemplated by the regional grouping.

While there can be no quibble with the merits of Modi’s COVIDiplomacy, perhaps the SAARC platform shouldn’t have been used for this purpose? The same thing could have been done by reaching out individually or collectively to all SAARC countries except Pakistan – the Modi 2.0 swearing-in model. That would have achieved the same result with a much clearer messaging to not only the friendly neighbours but also the enemy country.

Also read: SAARC: Modi reveals one for all, all for one vision