The stubble burning season is here and with Covid already playing havoc with our respiratory systems, the political apathy of state governments is the last thing we need.

The number of Covid-19 cases is increasing in India. While on the one hand the Dusshera and Diwali festive season is round the corner, on the other, it is also the time when air pollution is at its peak in North India. A major reason for this is the stubble burning in the agrarian states of Punjab, Haryana, parts of Rajasthan and western Uttar Pradesh. Considering that Covid-19 is primarily a respiratory disease, affecting the lungs and the oxygen saturation in the body, the state governments should be proactive in preventing the stubble burning this year.

However, media reports and the State Pollution Control Board reports suggest the contrary. According to the reports, the cases of farm fires have actually increased in the states instead of going down.

In Punjab, the incidents of stubble burning have witnessed a six-fold increase in the first 20 days of the harvesting season as compared to the previous two years, says a report. According to satellite data, the state recorded 1,926 farm fire incidents from September 21 to October 9, against 412 incidents in 2019 and 399 incidents in 2018 in the same period. With 920 farm fire incidents, Amritsar district ranks on the top, closely followed by Tarn Taran (405 incidents), Patiala (153 incidents) and Gurdaspur (102 incidents) districts, as of October 10, 2020.

Since farm fires is not a new or recent phenomenon, the state governments have to show an intent to act on the issue. Every year, it is the same situation - with northern India engulfed in a thick blanket of toxic smog. This year, with the pandemic additionally playing havoc with the health of people, the smog could be lethal. With each state government working on measures to curb the spread of Covid-19 in their respective states, the agrarian states burning stubble need to show some empathy towards their own citizens and that of the rest of the country. This level of apathy by the agrarian state governments towards the effects of pollution during the pandemic is condemnable. With the opposition and the ruling government engaged in a never-ending blame game, the common man is bearing the worst of the brunt. 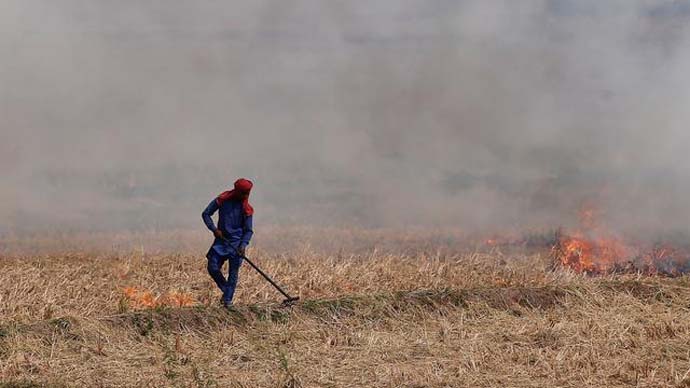 It is not just stubble burning that is poisoning India’s air, but also thermal plants. For instance, a news report suggests that of the 11 thermal power plants operating in the National Capital Region, 10 have missed the deadline of December 2019 for installing FGD equipment, that is installed to cut down emissions. The Center for Science and Environment (CSE) noted that regulation on the thermal power plants of Delhi-NCR can significantly bring down the pollution levels. While the Delhi government has shut down the two coal-based thermal power plants in Delhi, the other states are yet to take action in this regard.

The capital city faces massive air pollution during this time of the year. While Delhi has its own share of local sources of pollution, the stubble burning in the neighbouring states play a key role in generating pollutants. The air quality of Delhi is already in the "poor" category. From October 15, the Graded Response Action Plan (GRAP) by the Supreme Court-appointed pollution watchdog Environment Pollution (Prevention & Control) Authority for the National Capital Region (EPCA) will come into play. GRAP is an emergency action plan to control pollution levels by imposing various restrictions. On October 12, Delhi witnessed the worst air-quality this year and the smog is already at our doorstep.

Standing in 2020, when technology has grown leaps and bounds, scientific research and discoveries are better than ever before, it is difficult to understand why states like Punjab and Haryana are yet to adopt proper techniques to avoid stubble burning altogether. Recently, the Delhi government along with the Indian Agricultural Research Institute (IARI) developed a bio-decomposer solution to rapidly decompose farm residues. This will help farmers not burn the stubble. Delhi government will start spraying this solution across 700 hectares of farmland from this week. The Aam Aadmi Party-led government is shouldering the cost of Rs 20 lakh for this exercise for the benefit of the farmers, who don’t have to pay anything.

This acknowledgement of the problem and trying to find a solution to combat pollution is the need of the hour. Till date, pollution has not become a political issue, and therefore is not considered important by most of the political parties.

It is high time the governments of Punjab and Haryana realised this problem and worked aggressively towards a solution. We do not yet know how badly the toxic air will affect Covid patients. However, if the situation worsens significantly, then all the state governments and the Centre should take responsibility for this apathy and work towards solving the problem of stubble burning.

#Government apathy, #Covid-19, #Stubble burning, #Airpollution
The views and opinions expressed in this article are those of the authors and do not necessarily reflect the official policy or position of DailyO.in or the India Today Group. The writers are solely responsible for any claims arising out of the contents of this article.