Sex and Pakistan Politics: Why Cynthia D Ritchie has the military's ear

Pakistan’s mighty military and eulogised spy agencies seem to have less on her than she has on them.

"She absolutely had his ear, it was terrible!”

Joanne Herring was an American woman who came over to help Pakistan and became so close to the powers that be that she influenced policy, jihad and Pakistan’s internal politics. She is credited with introducing Charlie Wilson to Pakistani dictator Gen Zia-ul-Haq and thus began CIA’s “Largest Covert Operation in History”. Joanne Herring had no problem with the execution of the elected leader Zulfikar Ali Bhutto by the military regime led by Gen Zia. She endorsed it. She was from Texas. That was the 1970s.

Nearly a half century later, Bhutto’s legacy faces ruin and the charge is led by another white woman from Texas who absolutely has the establishment’s ear. Unlike Joanne, she knows a lot about Pakistan’s grassroots truths and surreal realities. While Joanne had Gen Zia’s ears, she has everyone eating out of her hands. Politicians of myriad hues and power’s who’s whos.

Amateur filmmaker, communications consultant, NGO worker, blogger, vlogger, Pakistan’s gori lover, Cynthia Dawn Ritchie is the new Joanne Herring, if not Mata Hari, as some Pakistanis call her. A startup consultant yesterday and a strategic adviser tomorrow, her wings span wide. She has access to corridors that are shut not only to the average Pakistani but even the rich and famous. Pakistan’s mighty military and eulogised spy agencies seem to have less on her than she has on them.

Cynthia has access to corridors that are shut not only to the average Pakistani but even the rich and mighty.

Cynthia D Ritchie not only visits but is photographed visiting sensitive military locations. On her own admitting, she has been gallivanting in protected areas during war-like times; President’s house, PM’s house, ministers’ bungalows. On Twitter, she rips apart critics and immediately dishes out info on them. It’s almost as if she has ready files on every person of consequence in a country where the regime does the file-keeping.

With no known sources of income, she claims to spend her own money to help build Pakistan’s image on the world stage. But she has done nothing of consequence in the decade she has spent in Pakistan. She has made films for YouTube that are viewed by Pakistanis and not one video has reached a 100,000-view mark. Cynthia D. Ritchie not only visits but is photographed visiting sensitive military locations.

When was the last time you were a guest at someone’s house and dictated how the hosts ran their household? Well, Cynthia D Ritchie does that and more. We in India have had many Indophiles who stay on here for the love of India. They would however keep off domestic politics. While she hasn’t been much active on the world stage, she has been very reactive when it comes to Pakistan’s internal matters. She is batting for the ruling Pakistan Tehreek Insaaf (PTI) because she admires Imran Khan since he visited Texas before she moved to Pakistan. As if that was not enough, she has now vowed to finish PPP (Pakistan People's Party). When was it last that a guest used the host family’s fissures to finish one off to favour another? All this in a country where not a leaf turns without military and intelligence approval.

Cynthia D Ritchie is brazen about being a mouthpiece for ISPR, the public relations department of ISI.

More loyal to Pakistan than Pakistanis, she has been trying to inculcate patriotism and love for Pakistan among Pakistanis. If love for Pakistan means hate for India, then so be it. Cynthia D Ritchie joins fellow Pakistanis in wishing death for Modi and runs for Kashmir Baneyga Pakistan. She says she has been investigating PTM (Pashtun Tahaffuz Movement), an organisation fighting for Pashtun rights. She campaigns on social media against PTM, apparently plans to expose them. She claims to be a human rights activist! She taunts with sexual undertones Pakistani women who speak ill of her while she claims to be in Pakistan to save poor brown women from the same. She respects minority rights but goes with the official anti-Ahmedi narrative. 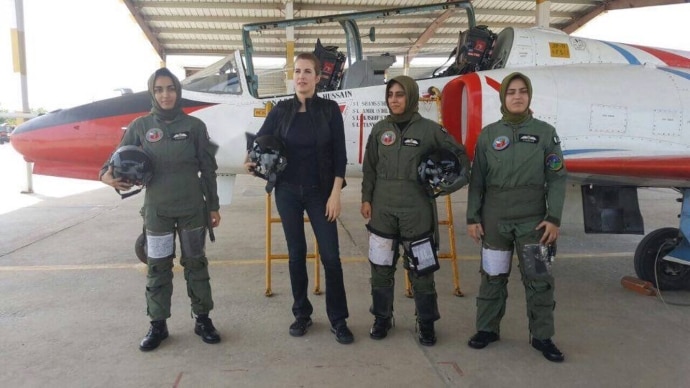 She was fighting for Pakistani bloggers forcefully ‘disappeared’ by the agencies for their blasphemous posts on social media. At one point, she was pleading Pakistan to get rid of the blasphemy laws. Waqas Goraya was one such blogger she supported. Then her tune changed. Last Eid, she found “lakh laanat” the most appropriate wish for him. Why would a guest working to polish Pakistan’s image target a Pakistani already hounded out of Pakistan by the devious agencies?

Since I'm blocked from Goraya and several like-minded accounts, I am unable to send Eid wishes to them.Also, meri Urdu is tutti phutti, so I hope this message from Osama Bhai is appropriate. pic.twitter.com/6MaP1BVwC1

Cynthia D Ritchie is brazen about being a mouthpiece for ISPR, the public relations department of the spy agency ISI. “Even if I did ‘consult’ for ISPR, so what?? It's called "PR" for a reason – they do PR, as do ALL world powers. ISPR may speak in certain ways as per their policy/mandate. I speak of Pakistan & share experiences as per my genuine care for Pakistan & its people. I always have,” she said once, replying to Taha Siddiqui’s claim that she worked for ISPR. It’s important to note here that an American citizen cannot by law work for a foreign intelligence agency. It's been a terrible two weeks for Pakistan's Opposition Pakistan People's Party. Its assassinated leader Benazir Bhutto, an iconic woman of the world and former PM, has her character assassinated on social media by Cynthia D Ritchie. PPP reacts by suing her. She reacts by accusing top PPP leadership of sexual depravity. These are serious charges that need proper investigation.

Very little is known about her life in Texas. We know she went to University of Texas, Austin; she worked in a company that provided janitorial services. Very few Pakistanis know the whys and hows of her continued stay in Pakistan. She knows all the right people in the right places.

She came to Pakistan in 2009 as a tourist and fell in love with it. A fellow Texan, Azam Swati, was the science and technology minister then. She came back in 2010 to work with Health Minister Makhdoom Shahabuddin, whom she last week accused of going too far down while giving her a back rub. She then got to know then Interior Minister Rehman Malik, who she has accused of rape and the Prime Minister, Yousaf Raza Gilani, who she accused of touching inappropriately as he gave her a hug. 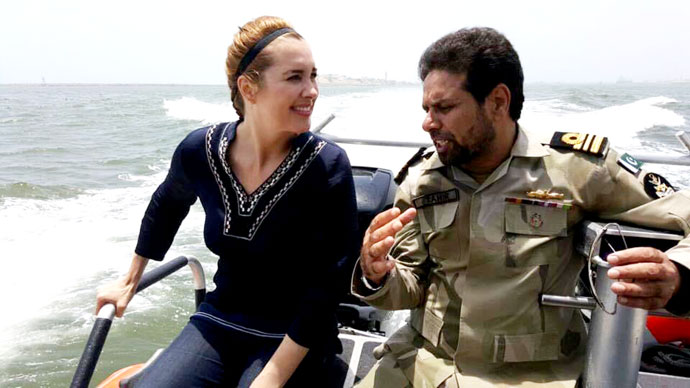 That’s as bitter an experience as can be. But she distanced herself from these PPP leaders once she got to know Imran Khan the rising star. According to socialite Ali Saleem, aka Begum Nawazish Ali, Imran Khan once proposed to Cynthia, not marriage but sex. She knew the right people in Nawaz Sharif’s Pakistan Muslim League as well. Cynthia clearly is attracted to powerful people, or power naturally gravitates towards her.

While sexual preference is a personal matter, being gay is potentially suicidal in a deeply Islamic polity. Sex itself is weaponised to damage public life of politicians in conservative societies. By calling out Bilawal Bhutto’s sexual orientation and Benazir’s obsession with boy toys, Cynthia D Ritchie has attempted to kill two birds with one sex stone: chip into the late leader’s constituency and delegitimise the young leader in the society’s eyes. She has learnt this from recent political history of Pakistan.

Ayesha Gulalai had revealed she received lewd text messages from Imran Khan. Bilawal used that revelation as a tool to attack Imran Khan and his PTI. All that did not go down well for Gulalai. PTI politicians believe Gulalai did it at somebody else’s behest.

Just before the elections that Imran Khan won handsomely, his former wife Reham Khan self-published a book that spoke about Imran Khan’s sex life in lurid details, including his penchant for rubbing black lentil over a body part and his preference for young boys in the true tribal tradition of bachabaazi. Imran won the election anyway. But Pakistanis believe the book was sponsored by the opposition. While the charges levelled by Cynthia D Ritchie are yet to be probed, many Pakistanis are sceptical about her story. The contention is that she has done this at the military’s behest to delegitimise PPP, a political force to reckon with, and the only party that still rules a state. Nawaz Sharif has been neutralised. His brother faces arrest. With both the main opposition parties delegitimised and decimated, there will just be their puppet in power.

David Coleman Headley was also an American-Pakistani. He arrived like an operative working for the Americans but he was bought over by the Pakistanis. He played the double-edged sword that bloodied India during the Mumbai attacks. Indians remember the name.

Murmurs within the Pakistani media fraternity suggest that American Cynthia D Ritchie has crossed over to the dark side. If she complained to US embassy officials about her rape in 2011, there’s very little chance the US embassy would remain silent about the assault on a US citizen on foreign soil. But they mysteriously did. Now that she has made the matters public, the embassy is treating it like a personal dispute between her and Rehman Malik. If that smells strange, consider this: the Pakistani agencies have not only remained silent, but facilitated the activities of a foreign operative on Pakistani soil for over a decade and allowed her inside places they won’t allow Pakistani officials and journalists.

Because she absolutely has their ear. What’s terrible is that she has more than just their ear. While this scandalous episode should end in prosecution and punishment, it will definitely mean the end of Cynthia’s 10-year-long picnic in Pakistan. She has done her job. If she goes any further, she will risk exposing the strings and the hands playing her.

A flame burns brightest just before it goes out.

(In an earlier version, the article mentioned Ayesha Gulalai as Gulalai Ismail.)