What explains the importance of DK Shivakumar for the Congress

The one person who stood for the Congress under all circumstances is D K Shivakumar.

In the political drama unfolding in Karnataka, many characters have played a central role. Within the Congress, the rebelling MLAs have been the focus of attention as have been former chief minister Siddaramaiah, current deputy chief minister Parameshwara and Karanatak Pradesh Congress Committee (KPCC) president Dinesh Gundu Rao.

Yet, one Congress leader who has always been in the limelight, especially when the party faces a crisis, is its trouble-shooter DK Shivakumar. DKS, as he is popularly called, evokes extreme reactions of unflinching loyalty and praise on the one hand and trenchant criticism and ridicule for grandstanding on the other. In the current crisis, he has jogged the limelight with his trip to Mumbai and relentlessly pursuing rebel MLAs who stayed back at Bengaluru. While he appears to have achieved little success both at Mumbai and at Bengaluru, this has not dimmed his enthusiasm and 'never give up' attitude.

Karnataka Minister DK Shivakumar on Renaissance Mumbai Convention Centre Hotel cancels his booking: They should be proud of a customer like me. I love Mumbai. I love this hotel. Let them cancel. I have other rooms also. pic.twitter.com/QWWTZ2Ciuj

Always in the thick of controversy, DKS seems to revel in it rather than shy away from it. He has frequently rescued the Congress at moments of crisis be it in shepherding its Gujarat MLAs during the famous Rajya Sabha election involving Ahmed Patel or in dealing with the frequent convulsions faced by the current Congress-Janata Dal (Secular) coalition. His critics would, of course, vehemently argue that his is part of the problem and not the solution!

DKS has made no bones about the fact that he sees himself as a potential chief minister of the state. In 2013, when the Congress rode back to power in the state, DKS staked his claim to be considered for the chief ministership. Not only with he not make it to the top post, but was denied a place in the Siddaramaiah cabinet. He bided his time, made the right noises within the party and made sure that he was inducted into the cabinet in a reshuffle. DKS has always raised his hand to lead the party in the state. (Photo: Facebook)

Early in his career, DKS had the support of powerful and influential leaders of the party. He emerged as a power to reckon with when SM Krishna became the chief minister in 1999. The last two decades have seen his steady rise. He was seen to be close to SM Krishna and was the one who monitored the swearing-in ceremony from the sidelines, giving the green signal to Krishna to rise for the oath taking at the exact auspicious moment! He was much more than a mere minister in Krishna's cabinet and was seen by many as the de facto chief minister. As a senior politician from the Congress referred to DKS as the chief minister’s ‘hatchet man’. Hatchet man he may well have been, but critics argue that he often had an agenda of his own!

The end of Krishna’s chief ministership also saw a phase of coalition governments, ultimately leading to the BJP coming to power in the state. This phase saw the true rise of DKS and his moving away from his mentor SM Krishna's shadow. He never lost his Assembly seat, though the delimitation process required him to change his constituency. This was also the time he built networks with politicians across the political spectrum and advanced and diversified his business interests. This was also the phase when he built his contacts with the Congress leadership in Delhi. 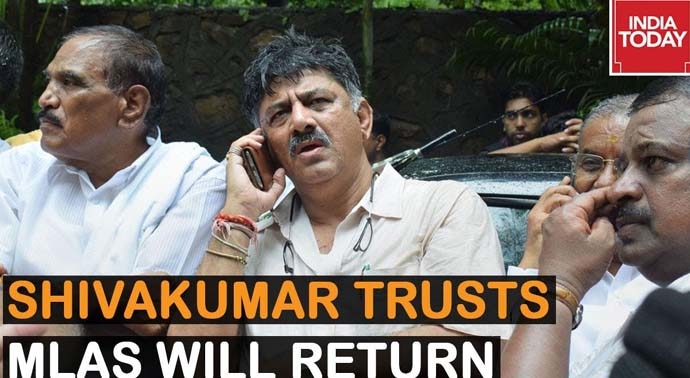 The Congress party relies on DKS whenever they are in trouble waters. (Photo: India Today)

Over the years, he has demonstrated fierce loyalty to the party and taken on tasks on behalf of the central leadership. He has not shied away from controversies and often been at the centre of it. The party has often relied on him when it faces a serious crisis or setback. Initially, his help was sought for extinguishing 'fires' within the state. In the last decade, his help has also been sought for problems that the party has faced in other states and at the national level.

His style of problem solving has often not been appreciated by his own party colleagues. That did not dim his enthusiasm with his favoured techniques and methods. His tactics were often controversial, abrasive, brusque and often lacking finesse. He often succeeded but as in the case of the latest crisis, he has had to concede that his approach has not succeeded. Even as he retreated, he continues to bide his time and wait in the wings. Till the right time comes DKS continues to sit in the shadows in Karnataka. (Photo: ANI)

Having his fingers in multiple pies, DKS has, in recent times, had to face sustained interrogation and questioning by the investigating agencies of the state. Many saw this as his past catching up with him. While the investigations continue, this has not dimmed his penchant for controversies. The 'hatchet man' continues to make himself important and relevant for the Congress.