This is how I see the 2019 Lok Sabha shaping up

It is Indian politicians’ worst nightmare: a deadlocked Lok Sabha in 2019.

Can the BJP-led NDA scrape together the 272 seats it needs to win a second term? Or will the Opposition mahagathbandhan pull off a blinder and stitch together a workable majority?

The Opposition grand alliance has a fatal flaw.

National Conference leader Omar Abdullah summarised it recently in an interview: “About (the) 2019 elections, I don’t think anybody knows what the heck is going to happen. It is such a fluid situation. Is a mahagathbandhan going to happen? Who knows. What will Mayawati do in Uttar Pradesh? Will N Chandrababu Naidu succeed in rallying anti-BJP parties? He has become the cementing factor. Modi versus the rest: Will the Opposition mahagathbandhan pull off a blinder and stitch together a workable majority? (Credit: AP photo)

“When we make it look like we are all ganging up against Prime Minister Modi, we are actually playing to his advantage. It allows him to be victim. It’s the biggest favour that we can do him. I don’t think it helps our case when 14-16 of us sit together on a stage and then blast him. It would be much better strategically if we did this state-wise — have an understanding in Uttar Pradesh, in West Bengal, in Andhra and Telangana — instead of lining up on a stage.”

Three events have since altered the arithmetic: the ongoing Rafale case; the internecine CBI battle; and the increasing likelihood of the Congress winning two of the three big states — Rajasthan, Madhya Pradesh and Chhattisgarh — in Assembly elections where the contest is largely a BJP-Congress binary.

Defeat for the BJP in Rajasthan, and possibly Madhya Pradesh, will give the Congress momentum ahead of the 2019 Lok Sabha polls. Cadre morale will rise. Fence-sitting allies will flock back to the Congress-led UPA. The BJP will feel the full force of anti-incumbency.

Uttar Pradesh, Maharashtra and Bihar will decide the BJP’s fate. The SP-BSP-Congress alliance in UP could halve the BJP’s 2014 tally of 71 seats (73 with ally Apna Dal). Possible defeats for the BJP in Rajasthan and Madhya Pradesh will give the Congress momentum ahead of the 2019 Lok Sabha polls. (Credit: PTI)

In Maharashtra, if the Shiv Sena sticks to its promise to fight solo, the BJP could retain the 23 seats it won in 2014, but the intra-Hindutva fight will split the vote share in favour of the Congress-NCP alliance. Fighting together, the BJP-Shiv Sena in 2014 won a combined 41 out of the state’s 48 seats. That number could fall unless the BJP and Sena restore their pre-poll alliance (which they probably will in the interests of self-preservation).

Bihar presents the most fluid picture. The JD(U) has forced the BJP to give it 17 of the state’s 40 seats in a 50:50 deal despite winning just two seats in 2014 when it was not a BJP ally. 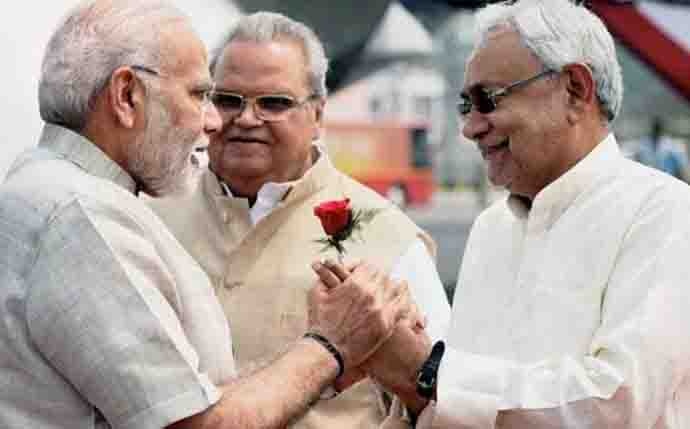 The fifty-fifty partnership: The BJP-JD(U) alliance is likely to sweep the state despite the RJD’s resurgence.

The BJP-JD(U) alliance will probably sweep the state despite the RJD’s resurgence but the BJP itself, compelled like the JD(U) to contest just 17 seats, could end up with little over half its 2014 tally of 22 seats. That will not help it bump up its numbers in a tight election.

The RSS’ strong stand on building a Ram Mandir is an indication of how close the 2019 Lok Sabha election is likely to be. The Sangh has lakhs of cadres on the ground — it knows which way the electoral wind is blowing.

UP Chief Minister Yogi Adityanath’s decision to build a Ram statue in Ayodhya is further indication of the BJP’s growing anxiety over the electoral damage the SP-BSP-Congress alliance in UP could cause.

Uttar Pradesh is not the BJP’s only problem.

The party could lose significant numbers of Lok Sabha seats in Rajasthan, Madhya Pradesh, Chhattisgarh, Jharkhand and Haryana. In Punjab, it may draw a blank. Gujarat though will hold firm with minimal losses.

Gains in the Northeast, West Bengal and Odisha will not be enough to compensate for seat losses in the north and west.

So what does the math look like five months from election-day? 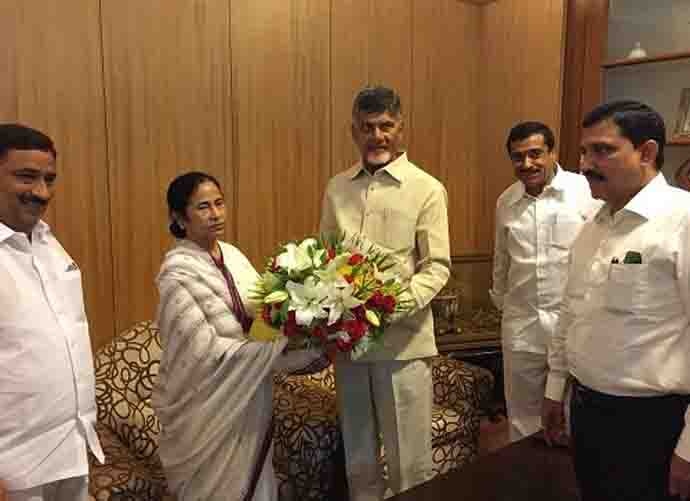 The TMC, BSP, SP and TDP will form the bulk of the third front's Lok Sabha contribution. (Credit: PTI)

My seat-wise, state-wise projection for the BJP:

Cluster Three: Tamil Nadu, Andhra Pradesh, Kerala and Telangana, along with the seven union territories, could add around 8 seats to the BJP total.

That’s a small decrease from the projection of 228 seats in August 2018.

Now to the NDA allies.

Principally, these are the Shiv Sena and the JD(U). The others — Akalis, LJP and smaller parties — will add little to the NDA tally. The Sena is likely to fall from the 18 seats it won in 2014 to around 15 seats if it contests in alliance with the BJP, though much will depend on candidate selection. The Shiv Sena is likely to fall from the 18 seats it won in 2014 to around 15 seats if it contests in alliance with the BJP. (Credit: IndiaToday.in

The JD(U), riding on a combined vote share with the BJP of over 50 per cent in Bihar and shepherded by its new national vice-president Prashant Kishor, will however be lucky to win 12 seats of the 17 it contests. Other allies, like the LJP, will add their bit to the overall non-BJP NDA tally in Bihar which will hover around 30 seats.

That’s way short of a simple majority of 272 seats and reflects three factors: one, poor ally management by the BJP leadership over the past four and a half years; two, the likely impact of the Opposition mahagathbandhan, especially in UP; and three, anti-incumbency.

How is the Opposition likely to fare?

The Congress will nearly double its 2014 tally but the electoral arithmetic stops it at around 80 seats. Other UPA allies like the NCP will struggle. Only the DMK will contribute significantly.

The Third Front now comes into play. Mamata Banerjee, Akhilesh Yadav, Mayawati and Chandrababu Naidu may have state-level alliances with the Congress in West Bengal, UP and Andhra respectively, but along with the TRS, BJD and the Left, they could form an independent Third Front which will enter into a post-poll alliance with the UPA. 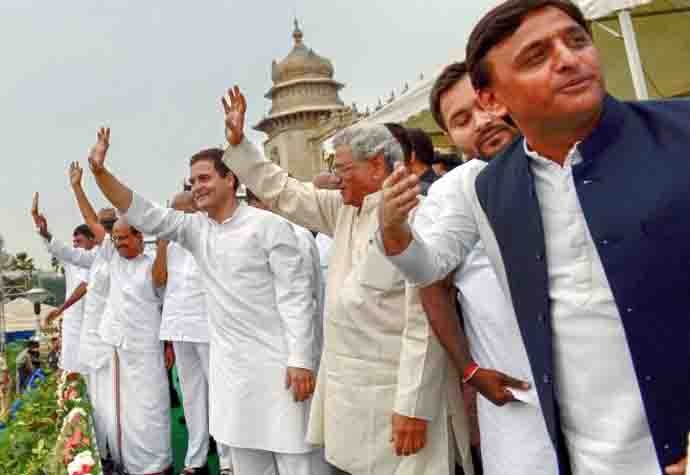 How is the Opposition likely to fare? (Credit: PTI)

How many seats will the Third Front garner? The TMC, BSP, SP and TDP will form the bulk of the Third Front’s Lok Sabha contribution while the more independent-minded TRS, BJD and Left will join in if circumstances are favourable, taking the TF tally to 125-130 seats.

The NDA has around 250 seats. The UPA and Third Front together also have 250 seats.

That leaves 43 Independents and unattached small parties like the YSRCP to tilt the balance.

For Modi, the gap for the NDA to breach 272 seats is potentially 22 seats. He will need all his personal chemistry to close that gap in the most pivotal Lok Sabha election in a generation.