Forget Pakistan. China-Bangladesh is the one to watch

Defence ties between the two countries is considered a major strength of the relationship.

China-Bangladesh relations have undergone dramatic transformation from a formerly adversarial relationship to an enduring strategic partnership. During the liberation of Bangladesh in 1971, China supported Pakistan. Post-liberation of Bangladesh, China even vetoed that country’s entry into the United Nations. Since then, the bilateral relationship has undergone significant transformation. Today, Bangladesh considers China an all-weather friend and trusted ally. During Chinese President Xi Jinping’s visit to Dhaka in 2016, the two countries established a strategic partnership.

China and Bangladesh diplomatic relations were established in January 1976, just a few months after the assassination of Sheikh Mujibur Rahman, leader of Bangladesh’s freedom movement and the country’s first Prime Minister. In August 1975, Sheikh Mujibur Rahman was killed in a military coup. The military dictatorship that succeeded Mujibur Rahman is credited with enhancing Bangladesh’s ties with China. In 1977, military dictator General Ziaur Rahman visited China, the first visit by any Bangladeshi head of state to China. The visit gave major impetus to the relationship and it has grown steadily. There has been a consistency in Bangladesh regarding its policy towards China. In 1991, democracy was restored in Bangladesh and democratic governments have backed the relationship. The democratically elected leaders have been visiting China regularly. The current Prime Minister Sheikh Hasina visited China in June 2014. There are various facets in Sino-Bangladesh relations. The two countries share defence, economic, political and people-to-people ties.

Defence ties between the two countries is considered a major strength of the relationship. China is the only country with which Bangladesh signed a defense agreement. China is the biggest arms supplier to Bangladesh. Bangladesh defense forces are equipped with Chinese arms including tanks, missile launchers, fighter aircraft and several weapons systems. Recently, Bangladesh purchased two Ming class submarines from China. Besides, China provides training to officers of the Bangladesh army. Bangladesh’s dependence on Chinese arms has made the army a major supporter of the defence relationship.

It is worth noting after liberation, the Bangladesh Army had inducted repatriated officers of Pakistan army who were familiar with Chinese arms. Because of this familiarity with Chinese arms, Bangladesh army preferred sourcing weapons from China. The influence of the Cold War also cannot be ignored. Mujibur Rahman was considered pro-Soviet because of his closeness to India despite India and the Soviet Union supporting Bangladesh in its liberation from Pakistan. China and Bangladesh have reconciled with the past and the relationship has grown in every sector.

Economic ties are an important aspect of bilateral relations. China is Bangladesh’s biggest trading partner with bilateral trade worth $10 billion dollars. However, the trade balance favours China with the trade gap between China and Bangladesh worth $9 billion dollars. Bangladesh pressed for concessions to reduce the deficit and China obliged giving duty-free access to Bangladeshi products. However, despite these concessions by China there is no visible change in the deficit. China is also investing in Bangladesh mainly in the area of manufacturing. 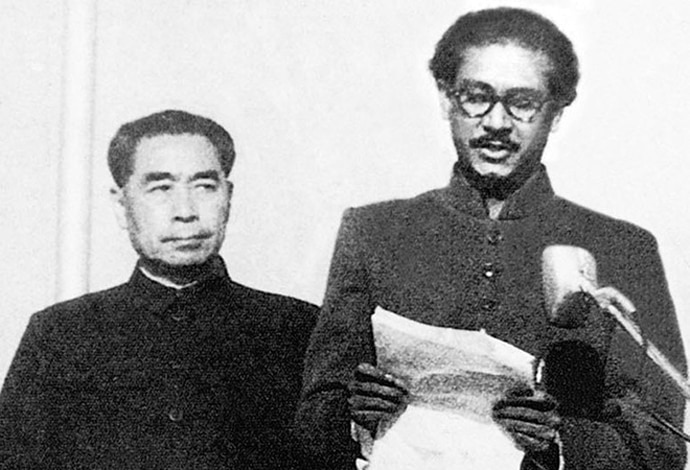 Development cooperation forms an important part of the bilateral relationship. China is a major development partner of Bangladesh in infrastructure. China is building bridges, roads, railway tracks, airport, and power plants. Chinese developmental assistance mostly comes as lines of credits. During President Jinping’s visit in 2016, China promised to give $24 billion dollars in economic assistance to Bangladesh primarily as lines of credit for twenty four projects.

These development partnership initiatives have helped China burnish its image in Bangladesh. Through the development partnership, China is able to portray itself as a friend seeking the wellbeing of the people and progress of the country. This image of China contributed toward its popularity in Bangladesh. China has wisely capitalised its popularity in gaining political advantage by convincing Bangladesh to back its entry into South Asian Association of Regional Cooperation as an observer and convinced Dhaka to join the Belt Road Initiative (BRI).

In addition to these initiatives, Beijing is providing scholarships to students to study in China and encouraging Bangladeshis to learn Chinese. A Chinese language centre was established in Bangladesh University of professionals, run by the Bangladesh army, to learn the Chinese language. Furthermore, today, there is flight connectivity between Beijing and Dhaka via Kunming in Yunnan.

A crucial reason for the growth of Sino-Bangladesh relations is due to a national consensus in Bangladesh. China has skilfully created a perception in Bangladesh that it is politically neutral and non-interfering by refraining from commenting about Bangladesh’s internal issues in public.

Bangladesh claims that economic considerations are the crux of this relationship. For Bangladesh, Chinese investments are lucrative, as it needs them for developing of its infrastructure. Bangladesh is aiming to become a developed nation by 2040 and to achieve that target the country needs to develop its infrastructure and boost economic productivity. China has been generous in providing financial support for Dhaka’s development projects.

China’s main interest is in Bangladesh’s 160 million strong market. Besides, Bangladesh is a good outsourcing destination for its manufacturing industries because of the cheap labour Bangladesh offers. Again, ports in Bangladesh are an important motivation for China because it offers a lucrative alternative route to reduce its dependence on the Straits of Malacca for the supply of its energy. Given Bangladesh’s geographical proximity to China’s Yunnan Province, its ports can be easily accessed for the supply of energy resources. China is a major development partner of Bangladesh in infrastructure.

Nevertheless, there is an India factor for the bonhomie between China and Bangladesh. There is a large section in Bangladesh supporting stronger ties with China to counterbalance India. For China, developing a relationship gives it a presence in a major country in South Asia, which is India’s backyard. Bangladesh could work as a bridge to access the Indian markets for its products. Again, Bangladesh’ strategic location, especially, close proximity to Siliguri Corridor, a narrow strip of land connecting India’s northeast region to the rest of the country, is also a motivating factor. Indian security analysts suggest that China might leverage its relationship with Bangladesh to watch India closely in the event major hostilities breakout between China and India over their disputed border. Although analysts in Bangladesh observed such assumptions are far-fetched, the country, instead wants to maintain good relations with both India and China. Recently, Prime Minister of Bangladesh said that India should not be worried about the country’s relationship with China.

While China-Bangladesh relationship is generally warm, there is evidence suggesting Bangladesh might not be subservient to the Chinese diktats. Bangladesh not agreeing to the Chinese conditions on the construction of the Sonadia deep-sea port in 2014 can be taken as an example.

(This article was originally published by the Observer Research Foundation, New Delhi. The original version can be found here. )

#Zhou enlai, #Bangladesh, #China
The views and opinions expressed in this article are those of the authors and do not necessarily reflect the official policy or position of DailyO.in or the India Today Group. The writers are solely responsible for any claims arising out of the contents of this article.