The perils of inequality – the ugly face of Delhi

Delhi is the land from where India runs. It is home to the India’s most powerful politicians and diplomats; also home to India’s poorest. It is a city where India’s best educational institutes and an acute lack of primary school for poor kids coexist.

In India’s capital, the rich-poor divide is stark.

The two children — three-year-old Kanak and four-year-old Minakshi — along with few others were playing out in front of their houses around 3pm in Bela Goan basti, near Rajghat, Daryaganj of Delhi. There is no anganwadi centre to engage them in pre-school activities. They have no access to government’s free basic healthcare services and healthy meals. When I enquired about why they are not going to an anganwadi or school, Rajabati, grandmother of Kanak and Minakshi, replied that "playing in nearby drain, which is filled with plastic, is their day-to-day activities. We are poor people, nobody cares whether these kids live or die".

Bela Goan is not far away from Yamuna River. 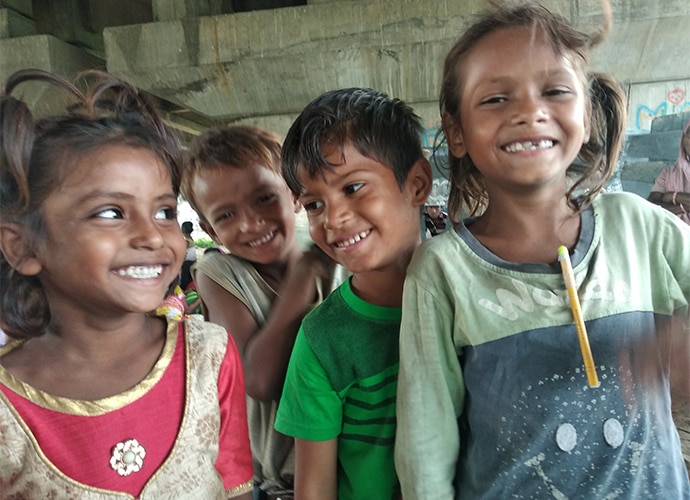 "Here around 600 families live since last 70-75 years and their preliminary source of livelihood of farming," according to sixty-five-year-old widow Batulan, who does not even get old-age pension from the government. Moreover, the government wants to evacuate these households by January, 2019, to a build a park. Nevertheless, the matter is sub judice. Now they are living a life of uncertainty. The children’s future seems bleak. The only bright spot in this gloomy situation is Kamal’s free classes under a flyover, which connects between East Delhi to Shantivan crossing on Ring Road of Delhi.

"I struggled to get good education in his childhood not just because of poverty but also because of lack of educational amenities by government," said Kamal, the young man whose sole aim is to educate as many as poor and vulnerable kids possible in his daily two-hour-class.

The Right to Education Act (RTE) defines the limits of neighbourhood schools as one km walking distance from the habitation at the primary level. However, David, Khusboo, Payal and Suhel like many other children walk everyday for more than five kilometres to reach primary school at Daryaganj of Delhi. Arvind Kejriwal, the chief minister of Delhi, said that his government would be working on a plan to achieve 100 per cent literacy in the national capital. It is widely reported in the media that Delhi government is aspiring to take reforms to the next level in education sector by developing government school education like private schools. However, the grassroots level scenario speaks a different story.

Harsh Vardhan, one of the high-profile ministers of Modi’s cabinet represents these slum dwellers in the lower house of parliament. Earlier, Congress leader Kapil Sibal used to be their Member of Parliament. However, basic amenities are missing in this basti. Although the slum does have electric connections, nobody has a legal electricity connection because of land disputes in the court. Jitender, a 24-year-old inhabitant of the slum, who works as a housekeeper, confessed that, "We acquire electricity by paying bribe." The Central government wants to eliminate open defecation in India by October 02, 2019 — the 150th birth anniversary of Mahatma Gandhi — but it seems like a distant dream once you acquaint yourself with the ground reality here in this part of Delhi.

There are only two tube wells for around 600 households and fetched-water from these pumps are not even potable. The Delhi government in March, 2017, inaugurated its ambitious project to provide 24-7 potable-water to resident of Delhi. Quality drinkable water that people would be able to drink straight out of the tap without any additional filtering or decontamination was its primary goal. The then water Minister Kapil Mishra of Delhi government said, "Delhi will be divided into 1,010 units and the areas will be connected to tap drinking water step by step".

But Bela Goan basti is yet to gain access to such quality water supply. Naseem Khan, a resident of the basti, who is a seventh-class drop-out said that, "Delhi Jal board (DJB)’s water tankers is the sole option to quench our thirst, which never reach on time to the people."

"The government is running many policies and programmes but the effectiveness of these programmes is questionable due to gaps in the implementation. This is the grim facts of the other side of the Delhi, where there is a dire need of new practices and procedures to ensure better healthcare among these derived communities," said Diptesh Singh, who runs an NGO called Lakshya Aakriti Foundation that works for integrated development of slums in Delhi. Kanak and Minakshi with their grandmother. (Photo: Sanjay K Bissoyi)

Children growing up in the basti experience an adverse living environment characterised by lack of sanitation and systematic garbage collection, no safe drinking water, most importantly no public education for them at all. According to a report by PwC and Save the Children called "Forgotten Voices — the world of urban children living in India," every fourth child in India lives in an urban area, and every eight urban child lives in slums where they are increasingly vulnerable to variety of risks and health hazards.

The urban population is projected to increase from 27.8 per cent in 2011 to 38 per cent by 2025 in India. With such exponential growth, the urban poor might outnumber the rural ones in coming decades. It is high time for policymakers to adopt rights-based approach to development in India; otherwise, sabka saath sabka vikas (collective efforts, inclusive growth) will remain a hollow slogan forever.