Delhi riot was independent India’s first digital riot, broadcast live on our phones. There was nothing that was hidden, and it was left to the people to make up their minds as to who did what and when.

If one looks closely, there is not much that separates one Indian from another. We all come from the same morass and will return to it.

I say this not as an elitist: I don’t own a passport and haven’t travelled out of the country since 2000. I say this, instead, as someone who has been rooted here forever.

Not an ordinary riot

I speak of difference because the recent riots in Delhi are all about the dividing lines. As bodies are fished out of dirty drains, the dirty drain itself has become a metaphor for how superficial these dividing lines are. In the neighbourhoods of north-east Delhi, mobs on either side of the ganda nala, gave it back to the other. They were united by country pistols and the desire to burn down schools owned by the rival community. The firepower and the mindset was the same.

Similarly, there’s not much that divides the Indian bhakt and the Indian liberal elites. Both live in, say, Defence Colony. Both send their children to American and British universities. Both are part of the same private members clubs. Indeed, the bhakt was a liberal earlier. The ganda nala that separates A-block from C-clock is more in the head. 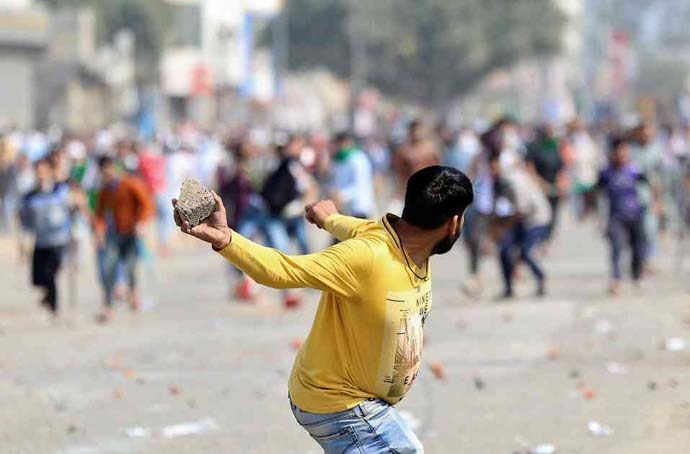 There’s not much that divides the Indian bhakt and the Indian liberal elites. (Photo of a stone pelter during Delhi riots: Reuters)

I make these points to argue that in such polarised times, it’s worthwhile remembering the nonsense that binds us than the nonsense that separates us. We are all survivors, regardless of class, religion and ideology, in a half-baked society that leeches the human spirit.

What happened in Delhi was no ordinary riot. Its immediate provocation was toothless Muslim grandmothers and harried housewives sitting in peaceful protest. This riot has to be seen in the larger context of BJP’s selfprofessed goal of establishing a Hindu majoritarian nation. TikTok exploded with Hindu teenage angst.

This was also no ordinary riot because it was Independent India’s first digital riot, broadcast live on our phones. There was nothing that was hidden. It was left to the people to make up their minds as to who did what and when.

If Muslims hitting the streets in December marked a turning point, Muslims picking up the gun marks yet another, in the post-BJP era. Both events have been turned to its advantage by the BJP.

The Hindu voter is now convinced more than ever that the Muslim is ‘kattar’ and has to be ‘taught a lesson.’ “Kaato, nahin to kat jaoge,” said a BJP spokesperson. In this time of Hindu resurgence and hate, the question for the Indian Muslim is: Where do I go from here? The judiciary, the police, the government and the Hindus of India are against them.

Kejriwal, it turns out, was, for all this while, more intent in grabbing a slice of the Hindutva political pie. Secularism is dead and buried.

Calls to radicalise have already come from ISIS. Not surprisingly, Hindutva and ISIS share the same enemies. This is so because both make religion the centrepiece of ideology. ISIS has asked Indian Muslims to steer clear of Kanhaiya Kumar, communists and secularists. But terrorism doesn’t come easily to everyone.

How will this end?

The more practical future that the Indian Muslim is looking at is one which is marked by an enduring day-to-day humiliation (at the hands of Hindus). There is enough reported evidence of this already happening. Kejriwal, it turns out, was, for all this while, more intent in grabbing a slice of the Hindutva political pie. Secularism is dead and buried. (Photo: Reuters)

The Indian Muslim doesn’t know what to do because her oppressor has no clear idea either. Will it be enough if they stop wearing the burqa and skull caps? When a Muslim learns Sanskrit and wants to teach it he is thrown out of Banaras Hindu University. How does the hapless Muslim ‘mainstream’?

The Hindutva project will be bloody; it’s something we’ve already witnessed in the attacks on Jamia Millia Islamia and Jawaharlal Nehru University, the brutality in U.P. and the Gujarat model being repeated in Delhi.

Let me end with a thought experiment. Hindutva is such an oppositional identity that if you take away the oppositional elements, there is little left. Suppose all the liberal websites shut down and the journalists moved to Japan, stopped writing. Suppose all the Muslims moved to Pakistan, every single one. Suppose the Left intellectuals also quit India and scholarly pursuits. What would you be left with?

A pure Hindutva nation with no enemies and nothing left to rage against. At this stage, surrounded by a preternatural quiet, my fellow Hindu will look in the mirror and ask the existential question: Who am I? What am I doing on this planet? What do I do with my time?