New Bhutan government's attitude towards India is not clear. This should worry India

Druk Nyamrup Tshogpa (DNT) is not talking about foreign policies yet. But when it will, it might not be in the best interests of New Delhi.

It’s a measure of our attitude to neighbours that the outcome of the third, and possibly most consequential general elections in Bhutan that took place last Thursday, hardly figured in the Indian media the day the results came out, last Friday. The decisive victory of a party, Druk Nyamrup Tshogpa (DNT), which was set up only in 2013, is a signal that the voter is looking for change, both within the country, as well as in its relationship with the outside world.

The DNT, headed by surgeon Lotay Tshering, won 30 out of the 47 seats to the National Assembly, while its rival Druk Phuenseum Tshogpa got the other 17 in a run-off, which is limited by the Bhutanese law to just two parties that got the maximum number of votes in the first primary round of the election that was held September 2018 and that saw the shock exit of the ruling People’s Democratic Party.

That round saw the DNT and DPT neck and neck, but in the final round, the DNT has surged ahead. 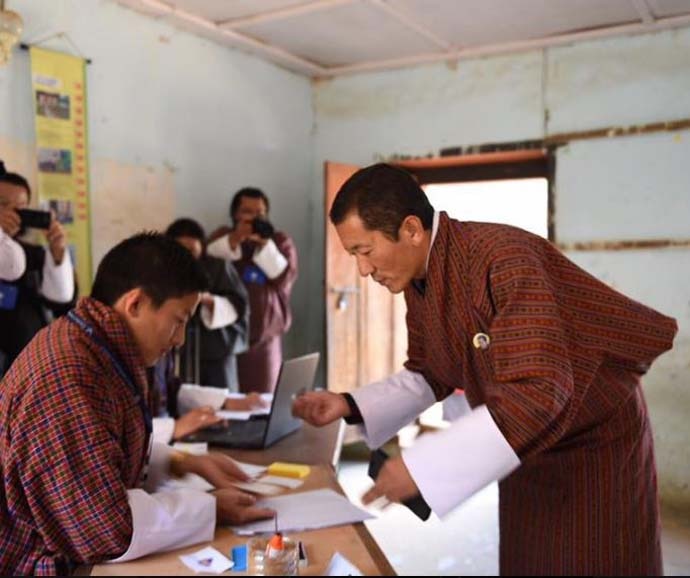 The DNT’s slogan “Narrow the Gap” focused on the need to reduce inequalities, promote affordable healthcare and restructure the economy. It clearly struck a chord with the electorate.

Dr Lotay Tshering, the leader of the party and the Prime Minister-designate, is a noted urologist who worked at the Jigme Dorji Wangchuck National Referral Hospital till 2013.

Selected by the party to contest the elections, he paid the equivalent of Rs 60 lakh indemnity to leave the Royal Civil Service. It was only in May 2018 that he was elected as the head of the DNT. Tshering is an MBBS from Dhaka University, Bangladesh and has another degree from Australia.

Reports suggest that India was not a factor in the elections this time, though there should be no doubts that the elections can and will have consequences for Indo-Bhutan relations.

In 2013, Bhutan was hit by high fuel prices when India withdrew subsidies for kerosene and gas on the eve of the elections. The move was seen as a signal of New Delhi’s annoyance with the Bhutan PDP. The party lost the election that year, even though India claimed that the subsidy withdrawal was a ‘technical lapse’. The DPT, which was seen in the past to be leaning towards China, made it clear in its election manifesto that it sought to maintain and further “excellent relations with the people and government of India.” The voters were looking for change, both within the country, as well as in its relationship with the outside world. (Photo: Facebook of Dr Lotay Tshering)

It proposed to enhance electricity production through three new hydropower projects, which would boost Bhutan’s primary exports — electricity to India.

The DNT had no section on external affairs in its manifesto.

However, it pointedly sought to focus on internal affairs such as balancing the economy, which, in its view, was too dependent on hydropower exports.

The Bangladesh, Bhutan India (BBIN) Motor Vehicles Agreement did not figure in the elections.

It may be recalled that in 2017, the Bhutan PDP government had failed to pass an enabling legislation in the National Council, Bhutan Parliament’s upper chamber. There was clearly popular sentiment against the agreement which would have smoothed the motor vehicle movement between the three countries.

The defeat of the incumbent government headed by Tshering Tobgay could not have been comfortable for New Delhi. This is especially because along with the Bhutanese government, New Delhi had managed the crisis over Doklam successfully last year.

The DNT’s attitude towards India is not clear, and neither is its position on Bhutan’s border problems with China that gave rise to the Doklam problem. But it is seen as a party that seeks to focus on economic change.

Bhutan’s politicians have observed self-restraint in not openly discussing relations with India or its other giant neighbour China. Doklam, which was ostensibly about Bhutanese territory claimed by China, did not figure in the elections.

But Bhutan is in the social media age, and there has been a lesser degree of restraint.

Foreign policy issues have been raised, even though Bhutan election officials have levied fines on candidates, some for making charges relating to ties with India.

On the surface, relations between the two countries are excellent and Bhutan’s geography ensures that India holds it tightly. Nevertheless, things are not exactly what they appear, and so, the upset defeat of the PDP, which was seen as being close to India, must be carefully analysed.

The DNT is a new factor and New Delhi must resist the temptation to look at relations with Bhutan through only the lenses of security.

#Foreign relations, #India China border dispute, #Bhutan, #Doklam crisis
The views and opinions expressed in this article are those of the authors and do not necessarily reflect the official policy or position of DailyO.in or the India Today Group. The writers are solely responsible for any claims arising out of the contents of this article.