ABVP winning 3 out of 4 seats gives us interesting pointers for the 2019 General Elections.

The results of the Delhi University Students’ Union (DUSU) elections are out, and the Akhil Bharatiya Vidyarthi Parishad (ABVP) has won three out of four posts.

As expected, EVMs are once again being blamed for the verdict. Of late, it has become a trend — whether it’s a local body poll, a state election or now, a students’ union election — that the losing side will cry foul, and blame the poor EVMs which can’t speak for themselves. 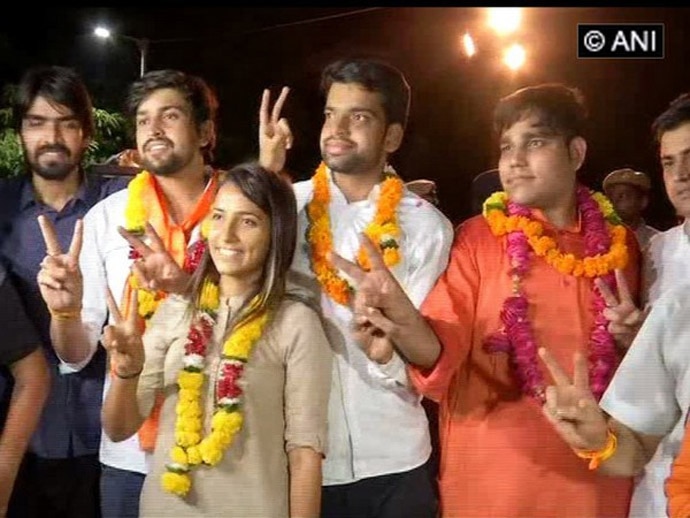 Delhi University is the largest and most popular university of India, with lakhs of students enrolled in different courses. The varsity’s policies strictly prohibit discrimination of any kind, and students from all over the world apply to it. This diversity among students is demonstrative of the inclusivity of DU, where youngsters from varied social, economic and political backgrounds study together.

Participating in this process must have given them a fine experience of democracy.

This year’s voter turnout was 44.46%, an almost 2% increase from the last time. It is good that the voting percentage has increased — it tells us that students are taking an interest in choosing their representatives.

Although the parent political parties of the ABVP, the National Students’ Union of India (NSUI) and others claim that they do not participate in the DUSU election directly, it is apparent to all that senior leaders of the BJP, Congress and other parties do pitch in with all kinds of resources for their student wings and affiliated organisations.

The fact that heavyweight advocates of the RSS and Congress usually represent the ABVP and NSUI in their legal battles tells us how seriously DUSU is taken by these organisations. The voting percentage in DU polls tends to go up just before a General Election year, showing an increased interest in politics among students. (Photo: PTI)

You can see pictures in newspapers of the DUSU-winning candidates visiting the Jhandewalan office (RSS) and 10, Janpath (Congress), to get the blessings of their political/ideological bosses.

This university has given senior leaders to almost all parties, whether it is the BJP, Congress, or AAP. From Arun Jaitley, Vijay Goyal and Ajay Maken to the newer crop of Alka Lamba, Tarun Kumar, Sushmita Dev, Anil Chaudhary, Anil Jha and Arvinder Singh Lovely, all were very active in student politics in their university days.

Indeed, the DU election is an indicator of the mood of the nation.

The huge sample size — in terms of number and diversity — gives enough insights to political pundits to take the elections as a pre-study for state Assembly and Lok Sabha polls.

There is a traceable pattern to this. If we closely analyse the voting percentage in DU polls close to General Elections, we see that in 2003 and 2004, the NSUI won in DU, and in 2004, the Congress formed the government at the Centre.

Of course, these events could be pure coincidences — but isn’t this exactly how statistical researches operate? Numbers never lie, and numbers do present a correlation between the DUSU polls and the General Elections.

The interesting point is that the voting percentage in DUSU polls goes up before the General Elections, which shows that students get active in politics just before Lok Sabha polls.

In 2014, while the General Elections had a voter turnout of 66.4% (highest in recorded history), DUSU polls also reflected a turnout of 44.4%, nearly the highest. 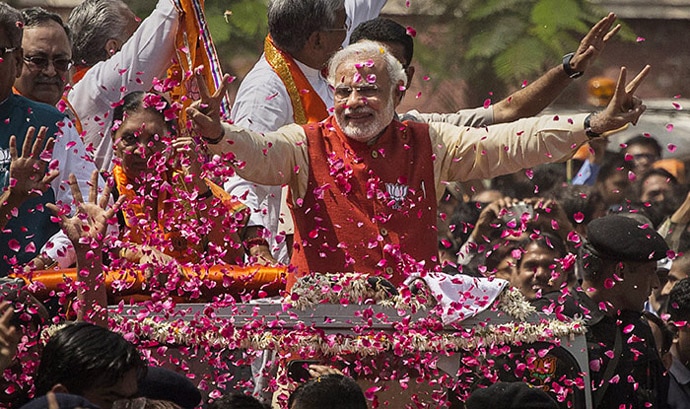 ABVP won DUSU polls in 2013 and the BJP swept the General Elections next year. (Photo: PTI/file)

This time round, the DU elections saw a 44.46 % voter turnout, and the ABVP managed to win 3 of 4 seats. The results show that the RSS and its political wings have managed to read the pulse of the youth and of the public better than any other political organisation.

The General Election of 2019 is not too far away — and the DUSU election does not bear good tidings for the Congress.

Last year, after the NSUI won two seats in the DUSU polls, the Congress had been quick to claim that the youth had rejected PM Modi and were looking towards Rahul Gandhi for leadership.

What does the Congress have to say now?

Last year, it was the BJP and ABVP trying to downplay the importance of the DUSU election results. No doubt, the Congress will now do the same — in fact, it has started the process by blaming EVMs.

But data on this election, and earlier elections, are before us — and these give us some very interesting pointers for 2019.

Also read: Why I have little faith in India's youth

#2019 Lok Sabha polls, #ABVP, #NSUI, #Dusu elections 2018
The views and opinions expressed in this article are those of the authors and do not necessarily reflect the official policy or position of DailyO.in or the India Today Group. The writers are solely responsible for any claims arising out of the contents of this article.