We need a fresh young politician with a steady stream of stories.

Move over Justin Trudeau. The world has a new heartthrob, even though he is named after a sweet. So while the rest of the world was agonising over the wave of right wingers sweeping the world, the French did what the British normally do. Kept a stiff upper lip and voted Left.

At 39, Emmanuel Macron ticks all the boxes for a new world. He’s the head of a political start-up, En Marche!, that’s just about a year old. He’s the perfect politician for these end-of-ideology times, declaring he is neither Left nor Right, but just a believer in collective solidarity.

He’s married to a woman old enough to be his mother, so he’s the ultimate feminist. And he’s a numbers man who has the soul of a philosopher.

What’s more, after the bling bling Nicolas Sarkozy and the tres dull Francois Holland, he seems determined to not embarrass the French by being their president. No Carla Bruni towering over Nicolas, no scooter dates with his mistress, Élysée Palace may finally be restored its presidential-ness with Brigitte Trogneux, a former school teacher as First Lady. 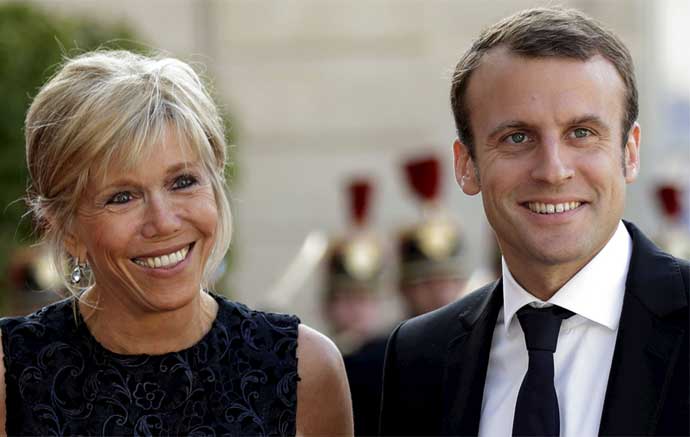 Macron has seen much of the working of the French government – first as a civil servant, then as an investment banker, and then as minister. He’d already got formidable support from world leaders even before being elected — from Angela Merkel to Barack Obama.

As for US President Donald Trump, last heard Kellyanne Conway was explaining to him where France was, and he was deciding whether he’ll greet Macron by shaking his hand like he did with Trudeau, or just ignoring him as he did with Merkel. As for our own prime minister, he is busy practising his French, especially how to say beta.

Macron will be tested, several times, not in the least because of the way he defines secularism in these times of anti-Islamic hysteria: "I simply believe that when one enters the public realm, the laws of the Republic must prevail over religious law," he'd said in an interview.

He will have to deal with a European Union without Great Britain. He wears his European heart on his sleeve and has said: "I am neither pro-European, Eurosceptic nor a federalist in the classical sense", and has described En Marche! as "the only pro-European political force in France’’.

What’s more, he is sure to be a delight for tabloids and glossy magazines the world over — even if French privacy laws prevent too much local reporting.

Now that Barack Obama has become just another rich ex-president hanging out with an international party crowd led by Richard Branson, and Hillary Clinton has vowed to join the resistance against Trump (too much watching of The Handmaid’s Tale has done this to her), we need a fresh young politician with a steady stream of stories.

Stories about the missus, older than him by 24 years, her attractive daughters. She’s his closest adviser, grandmother to seven, loves fashion (obviously, she’s French) and loves French authors. Stories about Putin trying to destabilise him because of the hack. Stories about him.

Stories about his tweets — follow him at @emmanuelmacron and read his views. And stories perhaps of other young men lusting after their much older teachers, hoping they can grow up to be president one day.

The world won’t be short of excitement for sure, this is, after all, a man whose party name ends with an exclamation mark.

Also read: Why France's Macron over Le Pen tilt for President is good for India

#French presidential election, #France, #Emmanuel Macron
The views and opinions expressed in this article are those of the authors and do not necessarily reflect the official policy or position of DailyO.in or the India Today Group. The writers are solely responsible for any claims arising out of the contents of this article.