Why the Farm Bills resulted in farmer protests

The uneasiness is about the adverse impact of the farm laws on the livelihood prospects of the farmers amidst the agrarian crisis in India.

The contentious farm laws gathered momentum after a brief lull when thousands of farmers from Punjab, under the aegis of Aam Aadmi Party, marched to Jantar Mantar in Delhi this week. Political parties have been rallying around the pros and cons of the Ordinance that was passed in great haste and in contravention to routine democratic procedures by abjuring the right to division in the Rajya Sabha. The pandemonium that ensued following the concerted protest by opposition leaders triggered the suspension of eight MPs from the session of the Parliament. The suspended MPs staged a sit-in protest outside the Parliament over the night, highlighting their commitment to bring the woes of the farmers to the front-page of the media and mobilise public opinion on it.

15 opposition parties along with BJP-ally Akali Dal wrote to President Ram Nath Kovind and urged him to withhold his assent to the two farm bills that were passed in the Rajya Sabha, but in vain. Meanwhile, the exacerbated pressure of protests by farmers from Punjab to Tamil Nadu compelled the Centre to engage in immediate damage control by announcing a hike in the minimum price for buying six rabi crops, including wheat, by up to six per cent.

However, such inducement has not sobered the unrest among farmers. The uneasiness is about the adverse impact of the farm laws on their livelihood prospects amid the agrarian crisis in India. The recent tractor rally of the Congress in Punjab was met with criticism from BJP as ‘protest tourism’ intending to misguide the farmers. 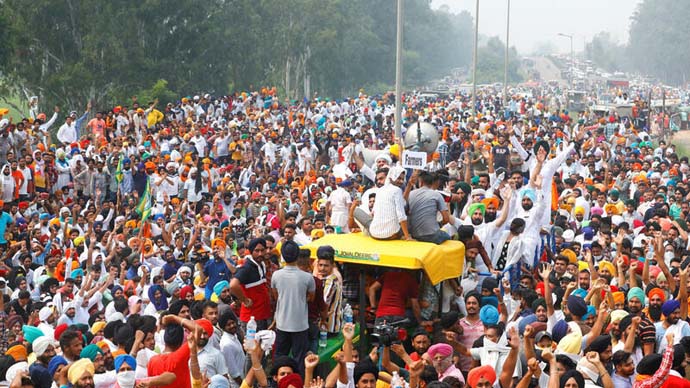 The contentious farm laws gathered momentum when thousands of farmers marched to Jantar Mantar in Delhi this week. (Photo: Reuters)

Against this background, Aam Aadmi Party under the leadership of Delhi CM Arvind Kejriwal has vigorously supported the cause of farmers, particularly of Punjab and Haryana, raising pertinent issues that have captured the national imagination. Punjab has been at the forefront of AAP’s articulation of demands in favour of farmers for many reasons. The first being that Punjab and Haryana are the two states which legitimately constitute the granary bowl of our country.

The Punjab Economic Survey (2019-2020) estimates that the per-capita income of Punjab stands at Rs 1,66,830 in 2019-20 which is higher than Rs 1,35,050 at the national level. According to the Survey, “Although the agriculture sector’s share in GSVA has declined over the years, the Sector remains a driving force in the State. This is reflected by a significant proportion of manufacturing and service sector enterprises which are agriculture-based. Punjab alone has contributed more than one-fourth and one-third of the central pool of rice and wheat respectively in 2018-19. The agriculture sector in Punjab is highly developed and nearly 99.9 per cent of the net sown area is irrigated. Cropping intensity is nearly 190 per cent. This has ensured that Punjab remains at the top in wheat and paddy yields tally.”

Second, the farmers of Punjab and Haryana have high stakes in the Minimum Support Price policy of the government. AAP has voiced the dangers of the withdrawal of MSPs at this juncture of agrarian crisis with the rising number of farmers’ suicides across India. MSP has been increasing only incrementally and barely keeping pace with inflation. Eg, MSP offered for wheat in 2007-2008 was Rs 850 per quintal, which went up by Rs 150 the following year and by another Rs 80 in 2009-2010. For 2016-2017 and 2017-2018 it was Rs 1,525 and Rs 1,625 respectively. Yet, the trade-off of MSP has been beneficial for farmers at large.

Arvind Kejriwal emphasised on the need for 100 per cent procurement of crops at MSP instead of the current six per cent procurement of crops at MSP. He expressed the gravity of distress if MSP is renounced, as the intent of the farm legislation makes no definitive commitment to MSP for farmers. The demand of AAP has been to explicitly include MSP as an integral part of the legislation. The implementation of Swaminathan Commission recommendations, which promotes the fixation of minimum support price at 50 per cent above the comprehensive cost of production, could usher in a new beginning. Delhi has been a successful model as it has implemented the recommendations of the Swaminathan Commission Report, assured highest crop loss compensation package and various other farmer-oriented schemes.

The MSP regime was initially introduced in the mid-1960s to tackle the food deficit in India. The government was keen on stepping up domestic production through Green Revolution technologies on the one hand and incentivise the farmers through minimum price fixation of their produce on the other hand. The purpose was to encourage the farmers to invest in intensive high yielding varieties of wheat and paddy. The Centre fixes MSPs for every rabi and kharif cropping season on the recommendation of the Commission for Agricultural Costs and Prices.

In 2016, the NITI Aayog in its evaluation report on ‘Efficacy of MSP on Farmers’, recommended the continuation of MSP as a policy framework to insulate farmers from unwarranted fluctuation in prices caused by variation in supply, lack of market integration, information asymmetry and imperfections in agricultural markets. The free trade in agricultural commodities provoked by globalisation related variations in prices internationally. The introduction of private players without guaranteeing level playing field to all farmers and systematic withdrawal of the state from economic structures will plunge the sector into precarity.

AAP’s active participation in farmers protests in Punjab has boosted its growing popularity in the rural hinterland of Punjab and its expansion of base amongst farmers. Many AAP leaders in Punjab like MP Bhagwant Mann, popularly known as “aam kisan da munda”, belong to farming backgrounds and have articulated the urgent need for a robust and inclusive agricultural economy. My interviews with AAP MLA Balwinder Kaur and AAP MLA Harpal Singh Cheema who is also the Leader of Opposition in Punjab reiterated their discontent with the farm laws. AAP suspects that a greater role of corporatisation in agriculture will be a disaster for small and marginal farmers. The creation of new trade areas sans appropriate regulatory mechanism will further disentitle farmers. The party has called for a complete rollback of the farm laws and has been negotiating for reassurance to farmers through a conscientious political will to protect their legitimate demands for agricultural prosperity.

The Centre has initiated a dialogue between farmers, key stakeholders in the agricultural sector and the Centre to mitigate the deadlock. Many farmers' groups have refused to join the talks alleging a non-serious approach. Farmers of Punjab have further demanded that the session of the legislative assembly should be convened and the Congress should unanimously reject the mandate of the farm laws in toto. The betrayal of the trust of the farmers by the Centre is a point of agitation as the BJP has retracted from its promise in the election manifesto.

Despite being a new party in Punjab, AAP is politically committed to taking the negotiations forward to arrest the negative spillover of the laws on the economy. Its position as a formidable opposition in Punjab’s Legislative Assembly will enable it to escalate pressure on the ruling dispensation to arbitrate with the farmers. AAP’s sustained and collective action plan may have far-reaching implications for farmers not only in Punjab but across the length and breadth of the country.

The shrinking state and the ambiguous farm laws bring us to the question: Can agriculture be an industry? A shared policy that seeks to augment farmers' profitability and incomes, ceases livelihood insecurity, arrests slowdown of agricultural growth and promotes capital formation in agriculture is the responsibility of the state. Mobilisation to transform the exploitative agrarian structure and redress specific grievances will only strengthen the democratic capacity of the nation.

Also Read | Farm Bills: How AAP has been championing the cause of farmers