India Today Editor-in-Chief Aroon Purie examines the implications of the farm legislations on a sector untouched by reform for decades, in the November 9, 2020 edition of the India Today Magazine.

Referring to reforms, Prime Minister Narendra Modi is supposed to have once told somebody that “India is a long freight train which has to be steered carefully, otherwise it will overturn”. I can’t confirm whether he said it, but the analogy could not be more apt. The Indian economy is burdened with a legacy of populist and ideological policies confounded further by convoluted and superfluous regulations. Many of them not only fail to make economic sense but are also harmful to economic growth. Prime Minister Modi, in his six-year rule, has been undoing them, some even beyond the realm of the economy. He has laid great emphasis on improving living standards in rural India, where 70 per cent of the country’s population lives. He has promised to double farm incomes by 2022 when India celebrates 75 years of Independence. His latest initiative to unshackle agriculture from ruinous socialist-era practices is a step in that direction. The three bills passed in the monsoon session of Parliament this September, if properly implemented, could unlock the vast potential of India’s agriculture sector.

By opening up inter- and intra-state movement of farmers’ produce, the legislations aim to turn the whole country into a market and end the monopoly of state government-owned markets, namely the Agricultural Produce Market Committees (APMCs), as well as the stranglehold of arthiyas (middlemen). The laws lay a framework for contract farming and tweak the Essential Commodities Act to allow government intervention only in exceptional circumstances. Significantly, the government has not dismantled existing support structures like the APMCs or the Minimum Support Price but only given farmers an additional avenue to sell their crops. 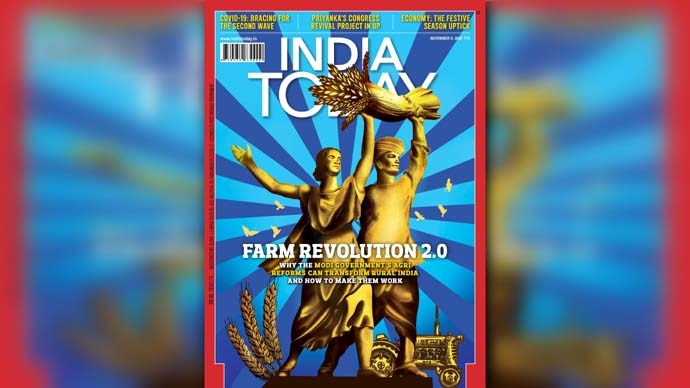 Three decades ago, India set itself on the path of economic liberalisation. With the economy in the doldrums and the treasury empty, the government at the time had no option but to overturn state control and allow market forces in. Nearly 30 years later, in a year of zero economic growth, India has embarked on another path of reform — to open up its farming sector. Agriculture has been untouched by change in over half a century. It lives in a sheltered and wasteful socialist paradise of boundless state support. Therefore, the current legislative moves to deregulate the sector and bring in the market forces of competitive pricing could ring in Indian agriculture’s 1991 moment.

India recorded its highest-ever wheat output — over 100 million tonnes — this year. We are already the world’s largest producer of milk and pulses, and the second-largest producer of wheat, sugarcane, groundnut, vegetables, fruits and cotton. However, years of plentiful harvests have failed to paper over the deep structural crisis in the sector. Agriculture employs 54 per cent of the population but contributes just 17 per cent to GDP. Cultivation is heavily skewed towards rice and wheat production while we have to import edible oils like crude palm oil and soybean oil. We have among the lowest per hectare yields in the world, in large part due to fragmented and shrinking land holdings—over 80 per cent of India’s farmers have less than two hectares of land. Despite being the world’s largest producer of many agri products, we account for less than 2.5 per cent of the global share of exports. We export only 7 per cent of our total produce, and our agri exports have plateaued over the past five years.

The Green Revolution of the late 1960s — introducing disease-resistant crops, mechanisation and fertilisers — vastly increased India’s agriculture output. From a humiliating ‘ship to mouth’ existence, the reforms helped India become one of the largest producers of foodgrains in the world.

The government’s focus since then has been on the supply side — to merely increase crop output. The failure to ensure that farming became profitable by ensuring that the farmer got the best price for his crop has bred a curious conundrum. Our godowns overflow with grain, but heavily indebted farmers kill themselves, farming is terribly unscientific, our groundwater supplies are depleted, and we have among the highest food wastage in the world. Skewed government policies force farmers to grow the wrong crops in the wrong regions, like paddy in water-scarce Punjab. Band-aid solutions like MSP hikes, fertiliser subsidies, free water and power supply, or farm loan waivers have only worsened state finances and failed to improve farmers’ plight.

However, the new laws have created a divide between the Centre and Opposition-ruled states. Punjab and Chhattisgarh have enacted legislation opposed to the central laws, with Rajasthan expected to follow suit. In Punjab, the government fears it will lose over Rs 3,000 crore it earns annually from the FCI for wheat and paddy procurement, while middlemen in the state fear they will lose over Rs 1,200 crore. These vested interests resist change beneficial to the entire sector because it affects their pockets.

Our cover story, ‘Farm Revolution 2.0’, written by Group Editorial Director (Publishing) Raj Chengappa, examines the implications of these legislations on a sector untouched by reform for decades. Chengappa, who has closely followed this sector, believes these initiatives can bring a paradigm shift in agriculture by making it demand-driven. He, however, warns: “There needs to be a clearly-defined roadmap, otherwise these initiatives could crash, and the government could well burn its fingers.”

Prime Minister Modi is turning his freight train of reforms, and there is no going back. The 1991 reforms liberated India from the 3.5 per cent Hindu rate of growth, accelerating it to over 7 per cent until 2018. If Farm Revolution 2.0 stays the course—and it must—rural India could be transformed forever.

Also Read: How farm reforms can transform India into an agricultural powerhouse by 2030

#India today magazine, #Agricultural reforms, #Green Revolution, #Farmbills
The views and opinions expressed in this article are those of the authors and do not necessarily reflect the official policy or position of DailyO.in or the India Today Group. The writers are solely responsible for any claims arising out of the contents of this article.