Wednesday morning, November 21, didn’t just mark the beginning of a protest led by the farmers and the adivasi community, but also reflected the unrest which prevails in Maharashtra.

Over 7,000 farmers hailing from different parts of Maharashtra, which we can now safely call a parched state, hit the streets with a demand to meet chief minister Devendra Fadnavis only to ensure that their long-standing demands are met and their hardships eventually come to an end. 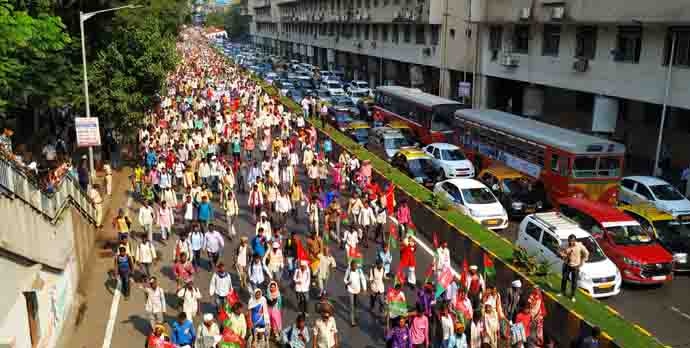 The farmers of Maharashtra have been hugely disappointed over government's apathy. (Photo credit: Mayuresh Ganapatye)

The farmers, who started the protest on Wednesday in Thane, one of the suburbs in Mumbai, finally reached the state’s capital on Thursday. The food producers of the state had to beat several odds to make it to Mumbai only to ensure that the government pays heed to their issues, which include implementation of the Swaminathan Committee Report.

The panel had recommended that the farmers should be paid one-and-a-half times the cost of production and the minimum support price (MSP) should be fixed keeping this in mind. The other demands include clearance of claims pending under the Forest Rights Act, and setting up a judicial system to implement it efficiently, drought compensation of Rs 50,000 per acre for non-irrigated land and Rs 1 lakh per acre for irrigated land, and a complete loan waiver.

Even though multiple parties like the Aam Aadmi Party (AAP), Janata Dal and Shiv Sena backed the protest, the onus of wiping the tears off the faces of the farmers coming from the parched regions ultimately lies on the BJP government.

But this isn’t the first time the government has been indifferent towards the cries of the farmers and the adivasis. Earlier this year, over 35,000 farmers walked a distance of almost 180km in the scorching summer from Nashik to Mumbai. The protest was called the Kisan Long March.

The streets of Mumbai turned red with the flags carried by famers and adivasis as they also carried the burden of the government’s incompetence on their hapless shoulders. Thousands of men with dried eyes and cracked feet finally made it back to their hometowns after Fadnavis assured them that necessary steps would be taken keeping their interests in mind. 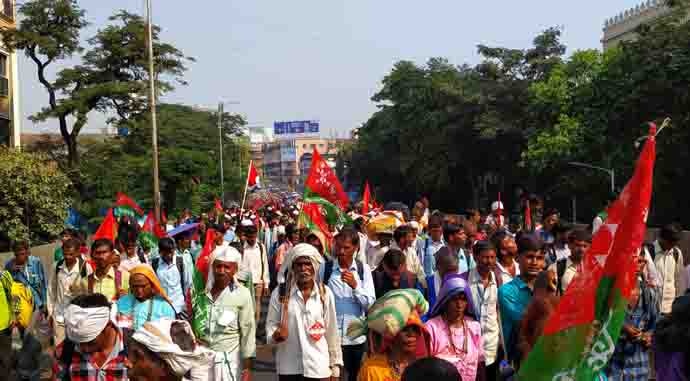 The farmers feel betrayed because promises made to them have not been kept repeatedly. (Photo credit: Mayuresh Ganapatye)

On April 15, 2014, while speaking in Jharkhand's Hazaribagh as prime ministerial candidate, Narendra Modi had promised 50 per cent profit margin for farmers on their agricultural produce as he gave the slogan ‘Bahut Hua Kisaanon Par Atyachaar. Ab Ki baar Modi Sarkar’.

He also stated that necessary steps will be taken to ensure that the farmers aren’t looted. In this year’s budget Finance Minister Arun Jaitley too announced MSP at 50 per cent above the cost in the budget but it eventually fell short of implementing the Swaminathan panel’s recommendations.

Apart from the aforesaid demands, the farmers also urged the government to refrain from forcefully acquiring their lands in the name of developmental projects such as the bullet train between Mumbai and Gujarat and the Delhi-Mumbai super expressway.

Eight months later, the haunting reality has forced the farmers to take to Mumbai streets once again. As they met with Devendra Fadnavis on Thursday, the chief minister assured them that their forest land rights claims will be settled by December this year.

The farmers eventually called off the protest after getting written assurances on their demands from the government.

A look at the demands of the farmers suggests all they want is to protect their livelihood and start afresh, breaking a cycle of farm suicides which have been haunting the entire farming community for decades.

But the fact that they had to relaunch this agitation only to make them heard should put the state government to shame.