Their anguish will slowly find its way to our plates too.

Tuesday, October 2, this year was a day of supreme irony in this vale of burgeoning ironies.

On the day India celebrated the birth anniversaries of Mahatma Gandhi who preached non-violence and Lal Bahadur Shastri who gave us the slogan "Jai Jawaan Jai Kisaan" the Delhi police and several battalions of the Rapid Action Force fired water cannons, teargas and rubber bullets on more than 50,000 farmers in Ghazipur on the way to Delhi, to protest against the Prime Minister’s agricultural policies. The concatenation of dates is remarkable for yet another reason. The present agitation, its scale and its concerns are reminiscent of yet another such farmer’s movement 30 years ago.

Only four days after Gandhi and Shastri’s birthday, on October 6, is the birthday of Mahendra Singh Tikait, a Jat farmer from West UP who first cut his teeth in protests in 1986, when he led a successful agitation at the Karmukhedi Power Plant near Shamli. This was a substation that had not been repaired for a long time, leaving tube wells silent and sugarcane drying in the farms.

Tikait led 1,00,000 farmers on a siege of Meerut for 40 days in 1988. His march to Delhi brought the capital and the Rajiv Gandhi government to a grinding halt. His protests initially centered around demanding regular and cheap electricity for farmers to run their tubewells, and more remunerative prices for farmers’ produce.

Tikait famously declared, "This is a drama of the madmen, only those should come who will fight to the finish." Tikait’s agitation was instrumental to a large degree in giving farmers the confidence to take on the state and bureaucracy. The Congress government felt his power in 1988. Today the BJP government is feeling the power of his son, Naresh.

Agitating for a slew of demands that included loan waivers, low minimum support prices (MSP), debilitating fuel rates, and the scrapping of ban on more than ten year old tractors (that has been imposed by the National Green Tribunal) the farmers had intended to terminate the yatra at Kisan Ghat in Delhi on Gandhi Jayanti .

Under pressure from farmers’ groups across the country due to falling prices and a glut of produce, the BJP government announced a hike in the minimum prices (MSP) of kharif (monsoon) season crops in July 2018. It claimed this was a "historic decision for farmers". However, the new MSPs do not meet the recommendations made by the MS Swaminathan-chaired national commission on farmers that suggested a "C2+50 per cent" formula to calculate MSPs — 50 per cent more than the weighted average cost of production, which includes the imputed cost of capital and rent for land cultivated, even self-owned land — which it said would provide stable and adequate income to farmers and alleviate farm distress. This was the formula that protesting farmers across the country had supported.

Arun Jaitley told the Rajya Sabha that the Budget 2018 announcement on ensuring farmers minimum support prices (MSPs) of kharif crops at one-and-a-half times of their costs will be based on the A2+FL costs, and not the C2 costs formula favoured by farm scientist MS Swaminathan.

The C2 formula factors in a lot of costs, including imputed rent on land and interest on capital, which makes the cost of production much higher than the level on which the Commission for Agricultural Costs and Prices bases its recommendations. The government’s "A2+FL" formula takes into account only paid-out costs plus an imputed value of unpaid family labor, which does not take into account imputed rent on land and interest on capital, does not provide for a profit, and hence leads to lower MSPs. We are grateful to our farmers for being the backbone of the country’s food security. But are we? (Photo: PTI)

The BJP manifesto on coming to power promised that all agricultural loans will be waived off for small and marginal farmers, while future loans will be provided interest-free. The new government will also create a roadmap to double agricultural income in the state by 2022. Further, the BJP promised to pay sugarcane farmers in India’s largest sugarcane-producing state within 14 days of the sale, while also coordinating with mill owners and banks to repay previously owed amounts to sugarcane growers within 120 days of forming the new government.

The Press Information Bureau, Government of India, Ministry of Agriculture & Farmers Welfare released a press release on 24-July-2018 stating: The Union Government, at present, is not considering any loan waiver Scheme for farmers, as such, waivers may impact the credit culture of a State by incentivising the defaulters, even if they are in a position to repay the loan, and thus, create/amplify the moral hazard by discouraging those borrowers who have been regular in repaying their loans. Further, each waiver granted makes it even more difficult to reject any future similar demand.

Rural debt, distress and death are growing nationwide. Finance Minister Arun Jaitley, in his budget speech, February 29, 2016 said, "We are grateful to our farmers for being the backbone of the country’s food security. We need to think beyond food security and give back to our farmers a sense of income security. Government will, therefore, reorient its interventions in the farm and non-farm sectors to double the income of the farmers by 2022."

In an era of increasingly uncertain weather and suicides on farms likely to worsen in the near future, the rural economic downturn is an important issue in the general elections of 2019, and it is unlikely Prime Minister Narendra Modi’s promise at a farmers’ rally in Bareilly, Uttar Pradesh on February 28, 2016 that farmers will double their incomes by 2022, will be kept.

According to Jean Dreze, "The promise to double farmers’ incomes by 2022 is meaningless. For one thing, it would require a growth rate of 20 per cent per year in real terms for four years in a row. That’s just a pipedream. For another, we have no reliable data on farmers’ incomes, so this promise does not commit the government to anything tangible."

Rural households continue to depend on moneylenders because formal credit delivery services, while growing, have not reached adequately into rural areas, and because non-institutional sources offer quick money, said a 2013 Reserve Bank of India (RBI) paper. In 2017, Uttar Pradesh and Maharashtra announced farm loan waivers worth Rs 36,359 crore and Rs 30,000 crore respectively, to discourage rising farmer suicides. However, since only a third of small and marginal farmers have access to institutional credit, as IndiaSpend reported in June 2017, such loan waivers have little effect. Instead, they contribute to NPAs, particularly of public-sector banks. 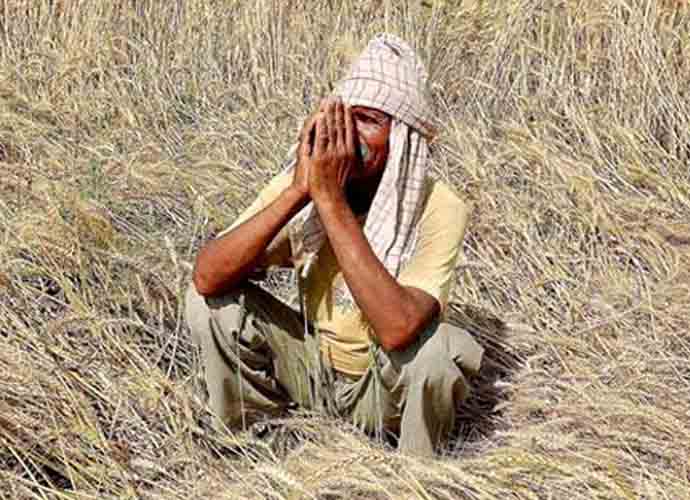 The promise to double farmers’ incomes by 2022 is meaningless. (Photo: Reuters)

Farmer suicides reflect the crisis brewing through several phases of structural transformation of the rural sector as outlined by political scientist KC Suri. The first phase, from the early 1950s to the mid-1960s, focused on land reforms, irrigation, and objectives like supply of credit, which are yet to be uniformly achieved. The second phase was the Green Revolution, during which the implications for distribution of resources, and economic and social development were ignored, and agricultural development was measured through productivity. The last phase was the period of economic reforms and globalisation, which only widened and deepened the inequalities.

The grief and anger of the farmer is an unbearable pain that wrenches at India’s guts today, a pain that does not show any signs of abetment in the near future.. They spill milk on the roads, stop the supply off vegetables to cities, pour out their tomato crops because it is simply not worth it after the middleman skims off his profits. They agitate with rats in their teeth and skulls in their hands. And they commit suicide in their desperation in large numbers.

The State goes into denial mode and causes are invented. Alcoholism, depression, gambling, character faults like ambition, extravagance, laziness, cowardliness, hyper-emotional behaviour. Wellness camps are set up to help them cope with their stresses, charities are organised and every MLA or MP seems to have some ready glib advice on tap. When nothing works and their anger spills into the streets and they come knocking on the gates of Delhi, they are shot.

What we preach piously is not what we practice. And there is no better example to illustrate our ambivalence than the following words on the YouTube channel of the godman Sri Sri Ravi Shankar:

"Annadata Sukhi Bhava" means ‘those who are providing me with this food, let them be happy’. When you say this, you are wishing prosperity for three people. One is to the farmer; the second is to the trader who buys from the farmers and sells the produce, and the third is to the people who cook the food and serve it to you. First, we wish well for the FARMERS. When the farmers are happy, then the ones who eat the food will also be happy. But, if the farmers are unhappy, and they are shedding tears and giving us food, then when we eat that food, we become sick. So, you must wish the farmers good health and happiness.

On 28th April, 2017, he declared, "We have done pad-yatra in 512 villages of Vidarbha, and on that basis we can say that poverty alone is not the reason behind the farmer suicides. They lack spirituality… Therefore, I appeal to all the people who work in this field (of spirituality) to reach out to farmers."

Twee comments about "spirituality" and tall declarations about doubling farmers’ income, ignoring the needs of the farmers instead of coming up with concrete solutions, do not paper over the policy paralysis and infrastructural lacunae that haunts India’s agrarian sector. Today, farming is simply not an option.

A recent study of 5,000 farm households across 18 states by a premier social sciences research, The Centre for Study of Developing Societies (CSDS), based in Delhi, found that 76 per cent farmers would prefer to give up farming. Around 18 per cent of respondents surveyed said it was because of family pressure that they are continuing this thankless profession. The survey shows that 62 per cent of interviewed farmers were not aware about the minimum support price (MSP) and among those who have heard about MSP, 64 per cent were not satisfied with the price government offers.

According to the report, the benefits of government schemes and policies are being mostly given to big farmers having land holding of 10 acres (4.05 hectare) and above. Only 10 per cent of poor and small farmers with average land holding of 1-4 acres (0.4 to 1.6 ha) have benefited from government schemes and subsidies. The farmers blamed the state and Central governments for their present condition as 74 per cent of those interviewed alleged they do not get any farming-related information from officials of the agriculture department.

As we in urban India wheel our trolleys along the rows and rows of premium basmati rice and lentil packets stacked end to end on the shelves in air conditioned malls, and bask in the illusion of plenty, there is someone somewhere at that very moment contemplating either the rope or a bottle of pesticide to escape his hell. His anguish will slowly find its way to our plates too.

#Congress, #BJP, #Gandhi Jayanti, #Farmer protest
The views and opinions expressed in this article are those of the authors and do not necessarily reflect the official policy or position of DailyO.in or the India Today Group. The writers are solely responsible for any claims arising out of the contents of this article.