Staying the course on the new farm laws presents India with a golden opportunity to be the global agricultural powerhouse of the 21st century.

Over the past week, tens of thousands of farmers have swarmed India’s capital city demanding the rollback of the three farms bills passed in the monsoon session of the Parliament, guaranteed monopoly of the mandis, and enforced minimum support price (MSP) across the nation. As we witness the endless back and forth between the government and protesters, let’s step back and assess the potential of these reforms, as opposed to going back to the status quo as the protesters demand.

The agriculture sector employs nearly 60 per cent of India’s workforce and contributes only 15 per cent to the country’s GDP. India is the second-largest producer of agricultural crops in the world, but because of unsustainable farming practices, lack of technology and inadequate infrastructure, it ranks very low in productivity. The market for agricultural produce in India is largely regulated through the Agricultural Produce Market Committee (APMC) mandis which are the primary points for farmers to sell their produce. The legacy procurement system denied farmers the freedom to sell anywhere, to anyone and the effective agricultural “License Raj” had been the root cause for the lack of investments, skills development, and technology improvements in Indian agriculture.

With this in mind, without the new farm bills, India will continue a regime where 85 per cent of Indian farmers get 40 per cent or lower prices than MSP with no access to buyers outside the mandis. In other words, rolling back the farm bills will tie the vast majority of Indian farmers to stagnant incomes. Punjab and Haryana, at the epicentre of the tensions, have seen alarming levels of water table decline due to limited crop diversification and the continued unsustainable cultivation of paddy, which is perpetuated by the MSP regime and encouraged by the FCI procurement infrastructure concentrated in these states.

At its worst, the immediate legal enforcement of MSP could further deepen rural distress and move India into a long-term agricultural depression, which will spill over to other segments of the economy. Forcing private players to buy at or above MSP will be catastrophic and could cause agriculture markets to collapse as there would be fewer buyers of produce. 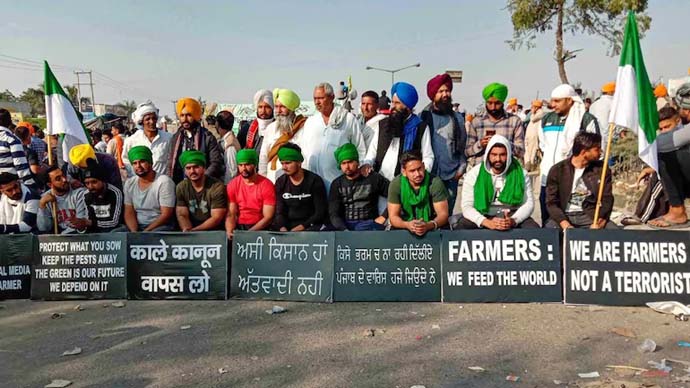 Over the past week, tens of thousands of farmers have swarmed India’s capital city demanding the rollback of the three farms bills. (Photo: PTI)

Now consider the alternative. The farm bills aim to revamp the agriculture value chain and attract the necessary private capital to provide farmers access to world-class inputs, sustainable farming practices and modern irrigation, and to enable the creation of a much-needed farmgate to market infrastructure. The bills allow farmers access to both national and international markets with complete control over their produce. The opportunity to sign forward contracts with industry will allow farmers to transfer their risk to private players. These contracts could also help farmers unlock access to organised credit, freeing them from the high-interest loans offered by middlemen. At the same time, the government could commit to ensuring the maintenance of the mandi infrastructure and continue to step in as the buyer of last resort when markets fail.

The new farm laws will embolden Indian farmers to diversify their agriculture production into higher-value activities such as horticulture, floriculture, and the allied activities of animal husbandry, dairy products, and poultry, and build a robust agro-food processing value chain. To sail in this sea of opportunities, the ‘3-Is’ of Investment, Infrastructure, and Innovation will be critical. They will realise the true potential of Indian agriculture as enabled by the new farm laws. State governments can step in to catalyse self-contained agricultural ecosystems of farmers, marketers, processors and investors to make India one of the top agricultural exporters by 2030. Technology-enabled innovation supported by investments will improve farm yield significantly, bringing India at par with global benchmarks.

In this version of the future, India could create 25-30 million entrepreneurs in agriculture, sowing the seeds of prosperity in rural India. Staying the course on the new farm laws presents India a golden opportunity to be the global agricultural powerhouse of the 21st century and Indian farmers the platform to achieve the same levels of prosperity as her Western counterparts. So, will the demands of the vocal privileged few drown out the aspirations of the many?

Also Read: How farm reforms can transform India into an agricultural powerhouse by 2030

#Minimum support price, #Agricultural produce market committee, #Farm bills, #Farmersprotest
The views and opinions expressed in this article are those of the authors and do not necessarily reflect the official policy or position of DailyO.in or the India Today Group. The writers are solely responsible for any claims arising out of the contents of this article.

The writer is the Managing Partner & CEO of Arthur D Little, India and South Asia.